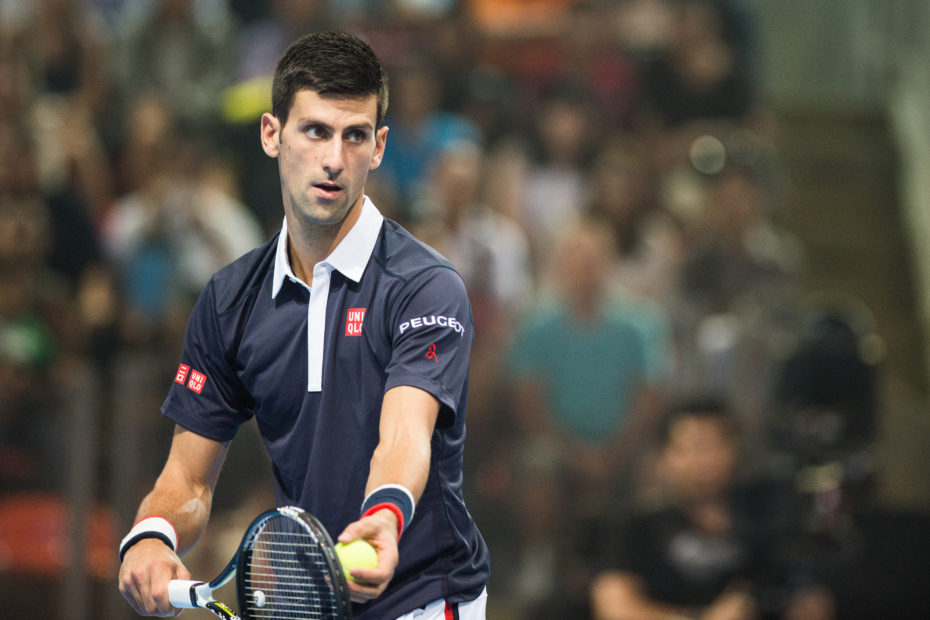 Novak Djokovic has had an illustrious tennis career over the past 20 years and he shows no signs of stopping after winning his fourth consecutive Wimbledon and seventh overall. The only man with more Wimbledon wins is Roger Federer, who has eight wins (he last won in 2017).

As always, it started off rather easy for the Serbian superstar – defeating Soon Woo Kwon in four sets, Thanasi Kokkinakis in straight sets, Miomir Kecmanovic in straight sets, and Tim van Rijthoven to reach the quarterfinals. Things started to get a little more difficult at that point.

RELATED: 20 Athletes With the Most Women’s Tennis Titles

20 Others Who Achieved What Novak Djokovic Did This Weekend

The final started off similarly as the past few matches – Novak Djokovic dropped the first set to Kyrgios, who was looking fresh off a lot of rest. That’s when Djokovic woke up, winning the next two sets 6-3 and 6-4. The fourth set went back and forth, but Djokovic won in the tiebreak.

It was the fourth-straight Wimbledon title for Novak Djokovic, who might’ve had five if the 2020 tournament wasn’t canceled. It marks his 21st career Grand Slam title and first of 2022, which means he has won at least one Grand Slam every year since 2018 – a total of nine in that span.

With it being his fourth-straight Wimbledon, Novak Djokovic has now won multiple Wimbledons in a row on two occasions – he won back-to-back Wimbledons in 2014 and 2015. Of course, he’s not the first and probably won’t be the last, so let’s take a quick look at some of the others!

**For the sake of this article, we are only including multiple Wimbledon titles since the start of the Open Era (1968 and beyond). We included men’s singles, women’s singles, men’s doubles, and women’s doubles in this list.**

Venus Williams and Serena Williams are two sisters who have etched their names in tennis history since turning pro in the mid-1990s – in singles and doubles. We’ll get to their singles accomplishments later, but let’s first talk about how dominant they were as partners.

Helena Suková and Jana Novotná are two professional tennis players from the Czech Republic. The two achieved a lot together and while their two Olympic silver medals in 1988 and 1996 reign superior, the dynamic duo also won back-to-back Wimbledon titles in 1989 and 1990.

In addition to their success together, they each had success with other partners at Wimbledon. Suková won with Claudia Kohde-Kilsch in 1987 and Martina Hingis in 1996, while Novotná won with Arantxa Sánchez Vicario in 1995 and Hingis in 1998. That’s a lot of trophies, isn’t it?

Pam Shriver and Martina Navratilova are two professional tennis players that represent the United States. They won 79 doubles titles together – including five Wimbledon titles. In fact, the duo won four Wimbledon titles in a row, just like Novak Djokovic, between 1981 and 1984.

What’s even more surprising is that they were so close to winning six Wimbledons in a row – they lost in the 1985 final to Kathy Jordan and Elizabeth Smylie, but came back to win it again in 1986. Navratilova also won the Wimbledon doubles with Chris Evert and Billie Jean King.

In 1968 and 1970 – the start and end of their three-peat – they had to overcome another strong Australian duo in Ken Rosewall and Fred Strolle. They defeated them in five sets in 1968, but the second time around was much easier, beating them in straight sets to complete the trifecta.

Peter Fleming and John McEnroe were an American duo who peaked in the late-1970s and early-1980s. They won back-to-back Wimbledon titles in 1984 and 1985, but that’s just the beginning of their Wimbledon journey – they won a total of four Wimbledons as doubles partners.

In fact, they would’ve had four-straight like Novak Djokovic had they not lost to the Australian duo, Peter McNamara and Paul McNamee in 1982 because Fleming and McEnroe won the year prior (1981). All in all, the American duo won seven Grand Slams and 52 titles together.

Throughout the 1990s and early-2000s, Todd Woodbridge had a stranglehold on Wimbledon, winning multiple titles in a row on two different occasions. The first occasion was with Mark Woodforde as his partner – the duo won five Wimbledons in a row between 1993 and 1997.

In fact, the two almost made it six straight, but lost to Jacco Eltingh and Paul Haarhuis in the 1998 Wimbledon final. Don’t worry, Woodbridge and Woodforde – who became known as the ‘The Woodies’ – came back to win the Wimbledon one more time in 2000 to bring it full circle.

Alright, we said Todd Woodbridge did it twice and while it would’ve been cool to do it with Mark Woodforde a second time, what actually happened is even more unlikely. Between 2002 and 2004, Woodbridge and new partner, Jonas Björkman, won three straight Wimbledon titles.

Then 2008 came along and the two formed quite a powerful partnership. Not only did they win the 2008 Wimbledon title, but they came back and won it again in 2009. In fact, they didn’t stop there, winning the 2010 French Open together before bringing their partnership to an end.

Billie Jean King is a former American tennis player who turned professional in 1968 and retired in 1990. During her 22-year career, she had a 695-155 singles record and 129 singles titles – including 12 Grand Slam singles titles and six Wimbledon titles. She’s one of the best of all-time.

And while King won three consecutive Wimbledon titles in 1966, 1967, and 1968, her three-peat technically doesn’t qualify for this list because the first two wins came before the Open Era. Not to worry – she won two straight Wimbledons in 1972 and 1973, and won her sixth title in 1975.

Martina Navratilova is a former Czech-American tennis player who turned professional in 1974 and retired in 2006. She had a career 1,442-219 singles record and won 167 singles titles (an Open Era record). Most of her success came at Wimbledon, winning the tournament nine times.

Steffi Graf is a former American tennis player who turned professional in 1982 and retired in 1999. During her 17-year career, she had a 900-115 singles record with 107 singles titles and 22 Grand Slam titles – seven of which came at Wimbledon. In fact, she ended Navratilova’s reign.

Venus Williams is an active American tennis player who turned professional in 1994. Aside from her success in doubles, she has compiled an 815-265 singles record with 49 singles titles and seven Grand Slam victories – including five Wimbledon titles between 2000 and 2008.

Speaking of Serena Williams, she is one of the most successful tennis players of all-time. Aside from her success in doubles with her sister, Serena has a 855-153 singles record with 73 singles titles and 23 Grand Slam wins – including seven at Wimbledon between 2002 and 2016.

Rod Laver is a former Australian tennis player who turned pro in 1963 and retired in 1979. He had a career 1,689-538 singles record with 198 titles (78 in the Open Era) and 11 Grand Slam wins– he completed the Grand Slam twice by winning all majors in the same calendar year.

As for Wimbledon, Laver was a four-time champion who won back-to-back tournaments on two separate occasions – though the first one came before the start of the Open Era. He did it in 1961 and 1962, and then again in 1968 and 1969 to kick the Open Era off to a good start.

We already talked about the three-straight Wimbledons John Newcombe won with Tony Roche, but Newcombe had himself an impressive singles career as well. He retired with a 1.072-401 record with 68 titles and seven Grand Slams – including three wins at Wimbledon.

Newcombe won his first Wimbledon in 1967, right before the start of the Open Era. He was defeated by Rod Laver in the 1969 Wimbledon finals, but won back-to-back Wimbledons in 1970 and 1971 – vs. Ken Rosewall and Stan Smith, respectively. They both went to five sets.

Björn Borg is a former Swedish tennis player who turned professional in 1973 before abruptly retiring in 1984. During his short, yet illustrious career, Borg had a 654-140 singles record and 66 singles titles – including five victories at the Wimbledon and six more at the French Open.

Borg did something that Novak Djokovic will have an opportunity to do next year – winning five consecutive Wimbledons. Borg did so between 1976 and 1980, in fact he almost did it six years in a row but John McEnroe beat him in the 1981 Wimbledon finals – ending the incredible run.

Speaking of John McEnroe, he’s a former American tennis player who turned professional in 1978 and retired from singles in 1994 and doubles in 2006. He finished his career with an 883-198 singles record and 77 singles titles – including three title wins at Wimbledon.

After beating Björn Borg in 1981, McEnroe made it to the Wimbledon finals in 1982 with a shot at defending his title – but he lost to Jimmy Connors. Don’t worry, he redeemed himself in 1983 and 1984, defeating Chris Lewis and Connors, respectively – fifth straight Wimbledon finals.

Boris Becker is a former German tennis player who turned professional in 1984 and retired in 1999. He finished his career with a 713-214 singles record and 49 singles titles – three of which came at Wimbledon. He’s also a two-time Australian Open winner and 1989 US Open winner.

Pete Sampras is a former American tennis player who turned pro in 1988 and retired in 2003. He finished his career with a 762-222 singles record and 64 titles – including seven wins at Wimbledon in an eight-year span, five wins at the US Open, and two at the Australian Open.

Roger Federer is an active Swiss tennis player who turned professional in 1998 and last won a Grand Slam in 2018. He has a 1,251-275 singles record and 103 singles titles – including 20 Grand Slam titles and a men’s record eight Wimbledon titles. He loves playing on that grass.

YOU MAY ALSO LIKE: 20 Athletes With the Most Men’s Tennis Titles

Even if he doesn’t, he joins elite company with seven Wimbledon titles – others to achieve it are PeteSampras (7), Steffi Graf (7), and Serena Williams (7). WilliamRenshaw (7) and DorotheaLambertChambers (7) also achieved the feat, but in the Amateur Era (before 1968).