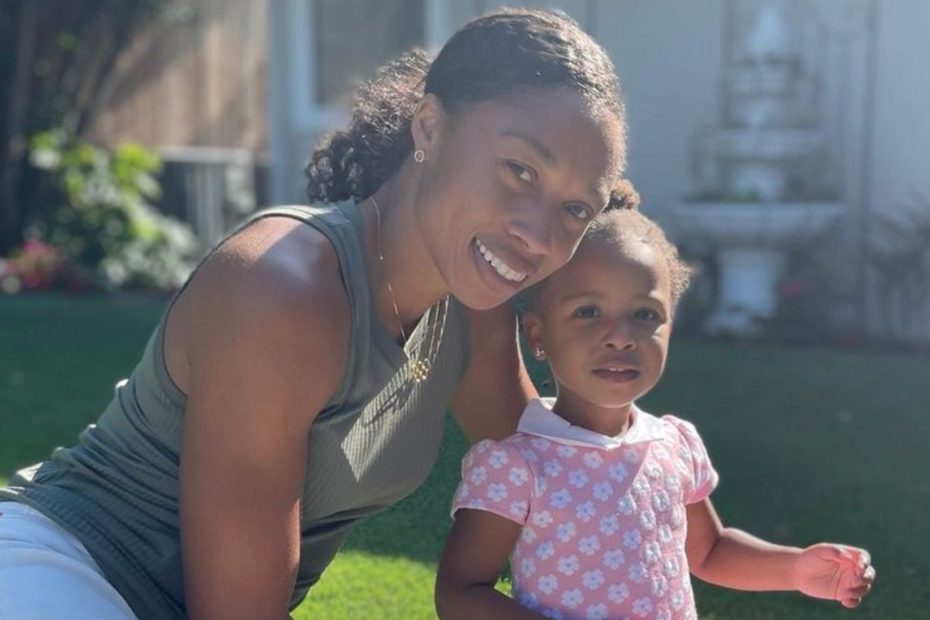 Allyson Felix holds 11 total Olympic medals, making her the most decorated track and field athlete in the history of the United States.

On top of her superb athleticism, she juggles motherhood, family, and personal life. For any normal person, they would’ve gone off the rails years ago. But, for the Olympian, she seems to manage just fine. This is how she does it.

It’s been well over a month since the 36-year-old ran her last competitive race at the World Athletics Championships in Oregon and committed to retirement. In her own words, she believes staying dedicated to her daughter Camryn outweighs any medals she could win. According to Felix, prioritizing her needs and outlining what she wants out of life has been helpful in maintaining a healthy mental head space.

“Whether that’s clearing a day, clearing a weekend, volunteering in her classroom, or picking up or dropping off at school, I want to be in her life in the biggest way,” Felix shared in an interview with the media outlet Romper. “But it is hard to balance it. Sometimes you sacrifice some things, and I think that’s OK. When you’re trying to do something and it’s that important to you, that’s necessary.”

And, of the many things Felix holds close to her heart, she begins them all with a similar process: breaking the challenge down into something smaller than it is. The track star explained, “I love to just break it down because I feel like once you make it small, then you start to have those small wins and they become bigger. Before you know it, I’m like, ‘Wow, I’m going after this thing that felt really big, but now it’s manageable.”

To further emphasize her point, Felix shared an anecdote that seemed to apply. When she entered her second Olympics game and didn’t place earn a gold medal, she was consumed with grief. However, it taught her to expand her skill set and prioritize what she knew worked for her athletic performance.

The lesson Allyson Felix learned after her second Olympic Games

“I was devastated. It felt like something that wasn’t in the plan. But in the end, it was because it allowed me to be better. It allowed me to stretch myself,” she detailed. “I feel like so much character was developed in those moments because it really tested me and required that strength and perseverance to continue on.”

Taking all of this into consideration, the fact that Felix medaled three times, all of them being gold, surely proves that she can do anything she puts her mind to. The mother held the same sentiments when dealing with her Nike contract controversy.

Following her pregnancy, Nike attempted to cut her sponsorship contract by 70%, which was something she had to fight against. Mustering all the courage she learned through hard work and perseverance, Felix successfully battled her revenue losses.

“I had so much fear, and I had never been that person that was comfortable speaking out; I was always a private person, so when I thought about sharing what was happening with me, it just seems so far outside of who I was,” the Olympian recalled. “I realized on the other side of that fear is this incredible freedom. I can have an opinion on things; I can stand up for people whose voice may not be as loud.”