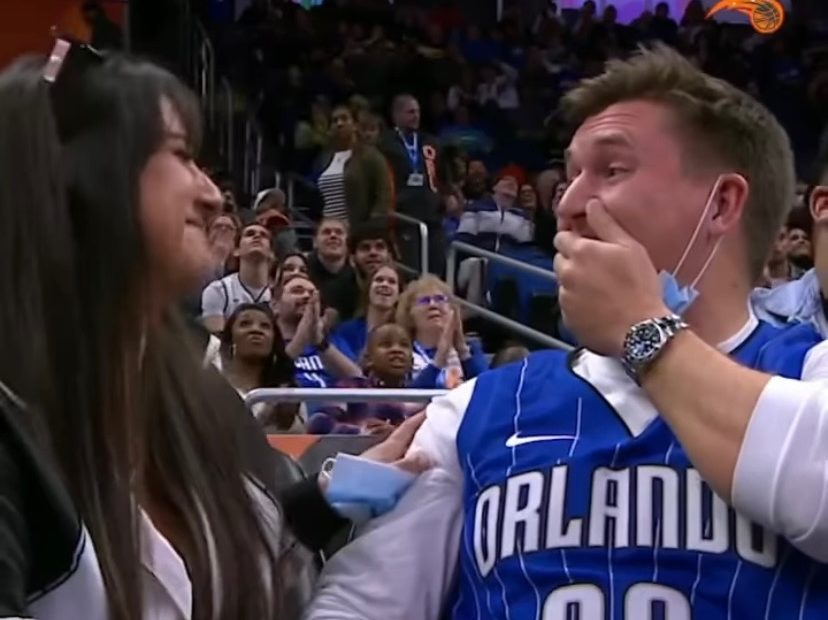 Thanksgiving weekend hosted a multitude of epic games, one of them being the Orlando Magic versus the Charlotte Hornets. While Orlando ultimately lost their at-home game to Charlotte with a score of 106-99, there was certainly some additional magic in the air of the Amway Center arena.

When Taylor Wheaton Baily decided she was going to tell her partner that she was pregnant, she knew she had to think outside the box. Deciding that the best way to deliver the news was during the middle of an Orlando Magic game, Wheaton Baily orchestrated a deal with the kiss-cam and had the outstanding message written clear as day so that everyone in the arena could see.

She brought her parents along for the surprise, but she did not realize that individuals all across the world would be tuning into her viral paternal announcement.

Sitting alongside Wheaton Baily was her husband James. When the kiss-cam zoomed in on the couple, it was a moment of excitement from realizing they were on screen, but it quickly became apparent that this display had a far more unique message. Needless to say, the Orlando Magic couple were feeling the love.

RELATED: Kelly Stafford is Taking a Hiatus From Games After She Was Seen Throwing Pretzels at Fans

“Congratulations, you ARE the father,” an announcer shared over the loudspeaker. James broke into an excited grin and threw his hands in the air before embracing his wife. James himself said, referring to the news, “When I looked up and saw the writing at the bottom, that’s just when my jaw dropped and it was just such a whirlwind of emotions at that point.”

“I think he was very surprised as everyone saw on his facial expressions,” Wheaton Baily reported when she discussed with WESH 2 News after the Orlando Magic game. She added that the moment was planned way ahead of time since she always had plans to let James know the news in a one-of-a-kind way. She said, “My husband has always dreamed of me telling him in a really cool way. So I thought it would be neat to get on the kiss cam.”

The special moment even made some of their closest friends aware that the two were about to become parents. Wheaton Bailey shared, “There were some of my friends local in town that were like, ‘Are you pregnant?’ And I was like ‘Oh are you at the game?’ And they were like ‘No, you’re on Sports Center right now.'”

The soon-to-be father also concluded, “We haven’t even eaten turkey yet and it’s already the best Thanksgiving ever.”