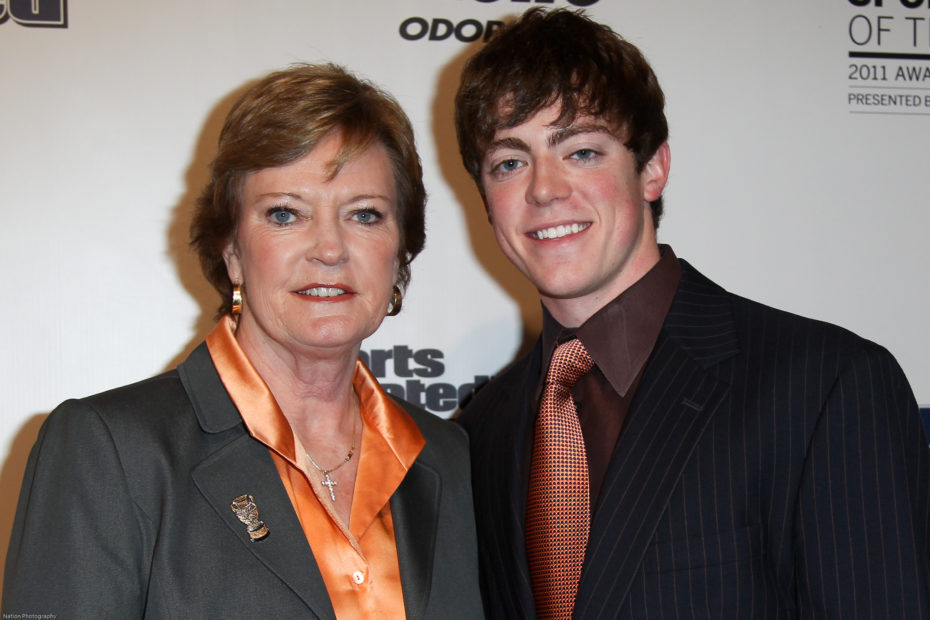 Pat Summitt: Her Story and Many Accolades

Pat Summitt was born on June 14, 1952 to Richard and Hazel Albright Head in Clarkesville, Tennessee. Little did they know they just gave birth to one of the greatest coaches of all-time and she would accomplish it all in her home state of Tennessee – what a wonderful story.

Growing up, Summitt was always a talented basketball player. In fact, her parents moved to Henrietta, Tennessee when she was in high school because Clarkesville didn’t have a women’s basketball team. It wasn’t long before she was playing for the University of Tennessee at Martin.

At UT-Martin, Summitt played for Nadine Gearin – the program’s first ever women’s basketball head coach. Between 1970 and 1974, she helped lead the UT-Martin Pacers to a 64-30 record and was the campus’ all-time leading scorer when she graduated with 1,405 career points.

Pat Summitt graduated from UT-Martin in 1974 and showed immediate interest in a coaching career. She was named a graduate assistant at the University of Tennessee ahead of the 1974-75 women’s basketball season, but plans changed once the head coach suddenly quit.

In need of a head coach before the season started, the University of Tennessee offered the job to Summitt – it would be one of their greatest decisions in campus history. She took the job, even though it meant driving the van and washing uniforms – which she had no problem doing.

Summitt was only 22 years old when she became head coach of the Lady Vols and a lot of her players were around the same age as her. Over the next 40 years, Summitt would embark on a legendary coaching career that may never be duplicated – here are some of her highlights.

During her 38-year career, Summitt saw 122 of her players complete their eligibility at the University of Tennessee. Of those 122, every single one of them earned a degree – a graduation rate of 100%. Summitt, herself, earned a master’s degree in physical education at UT.

The 1997-98 season was Pat Summitt’s 24th year as head coach of the Tennessee Lady Vols – and, boy, was it a special one. They finished the season a perfect 39-0, starting the season as the No. 1 team in the nation and ending the year the same way. It was her only perfect season.

It was also the end to an incredible three-year run, in which the Lady Vols won the NCAA Tournament each year. Their perfect season was Summitt’s sixth national championship as head coach. Only one other coach – Geno Auriemma – led their team to three straight titles.

Pat Summitt finished her coaching career with a 1,098-208 record with Tennessee. At the time of her retirement, no other head coach had more – men’s or women’s. Today, she has the fourth most wins in NCAA history – behind Mike Krzesewski, Tara VanDerveer, and Geno Auriemma.

The wins came in bunches – literally winning 84% of the games she coached. Her team finished with at least 30 wins on 20 different occasions, which is remarkable considering she was known for scheduling difficult matchups during the regular season in preparation for the NCAA tourney.

Between 1974 and 1979, Pat Summitt and her Lady Vols competed in the Association for Intercollegiate Athletics for Women. Ahead of the 1979-80 season, the Lady Vols joined the Southeastern Conference (SEC) and they owned the conference until Summitt retired in 2012.

11. 31 Consecutive Trips to the NCAA Tournament

The NCAA Tournament, also known as March Madness, is the focal point of the season – just making the tourney is an accomplishment in and of itself. While the men’s tournament dates back to 1939, it wasn’t until 1982 that they extended the tourney to women basketball teams.

Between 1982 and 2012, the Lady Vols made 31 consecutive trips to the NCAA tournament under Pat Summitt – that’s right, they made it every single year. If you were a player and you wanted a chance to shine on the biggest stage, playing under Summitt was the way to go.

Their first Final Four appearance came during the 1981-82 season – the inaugural season for the women’s NCAA tournament. It goes to show that her methodology of scheduling tough games during the regular season paid off when it mattered most. Her team was always ready.

Of those 18 Final Four appearances, the Lady Vols advanced to the National Championship Game 13 times. And of those 13 trips to the finale, her Lady Vols were crowned champions on eight occasions – the third-most all-time, behind John Wooden (10) and Geno Auriemma (11).

8. Eight-Time SEC Coach of the Year

In fact, Geno Auriemma is the only college basketball coach to win the award more than Summitt – he has won it eight times in his 38-year career. The only other women’s head coaches to win it multiple times are Dawn Staley, Tara VanDerveer, and Muffet McGraw.

6. Presidential Medal of Freedom in 2012

On May 29, 2012, Pat Summitt was awarded the Presidential Medal of Freedom by then-President Barack Obama. The medal is deemed the “highest honor any civilian can receive in the United States” and it couldn’t have gone to someone more deserving than Pat.

More than a decade before she was awarded the Presidential Medal of Freedom, Pat Summitt was named the Naismith Coach of the Century in 2000. She won the award alongside Hall of Fame coach John Wooden, who was head coach of the UCLA Bruins between 1948 and 1975.

Some other interesting accolades that cement Summitt’s legacy include being a No. 1 seed 21 times, earning 112 wins in the NCAA tournament, never coaching a losing season, coaching 161 scholarship players, producing 34 WNBA players, and producing 21 All-American players.

That was just her first Olympic medal, though. In 1977, she started coaching Team USA and won several medals leading up to the 1985 Olympic Games in Los Angeles. She led the team to a gold medal and finished her international career with a 63-4 record as coach of Team USA.

Pat Summitt was inducted into the Women’s Basketball Hall of Fame as a member of the Class of 1999. Her contributions as both a player and head coach helped change the landscape of women’s basketball forever. Her legacy and influence on the game will never be duplicated.

In 2000, the same year she was named Naismith Coach of the Century with John Wooden, Pat Summitt was inducted into the Naismith Memorial Basketball Hall of Fame – one of the biggest honors in the basketball community. She was also the NCAA tournament runner up in 2000.

Summitt has not only coached great players, but has seen a lot of those players (as well as assistants) go on to have successful coaching careers – including Nancy Darsch, Carolyn Peck, Sylvia Hatchell, Sharon Fanning, Jane Albright, Kara Lawson, and Jody Adams.

There Will Never Be Another Pat Summitt

After 38 years of coaching, Summitt retired in 2012 after being diagnosed with early-onset Alzheimer’s disease the year prior. On June 28, 2016 – just two weeks after her 64th birthday – Summitt passed away at a senior living facility. The entirety of her estate was given to her son.

Since passing away, we’ve witnessed the opening of the Pat Summitt Alzheimer’s Clinic in the University of Tennessee Medical Center. The NCAA also has an annual award named after her – the Pat Summitt Award – which is given to individuals positively influencing college athletes.

YOU MAY ALSO LIKE: 20 Winningest College Basketball Coaches of All-Time

Pat Summitt’s career was a legendary one – after all, she is regarded as one of the greatest coaches of all-time. In fact, some consider her at the top of that list and not just among basketball coaches, but coaches of any sport. There will never be another Pat Summitt.