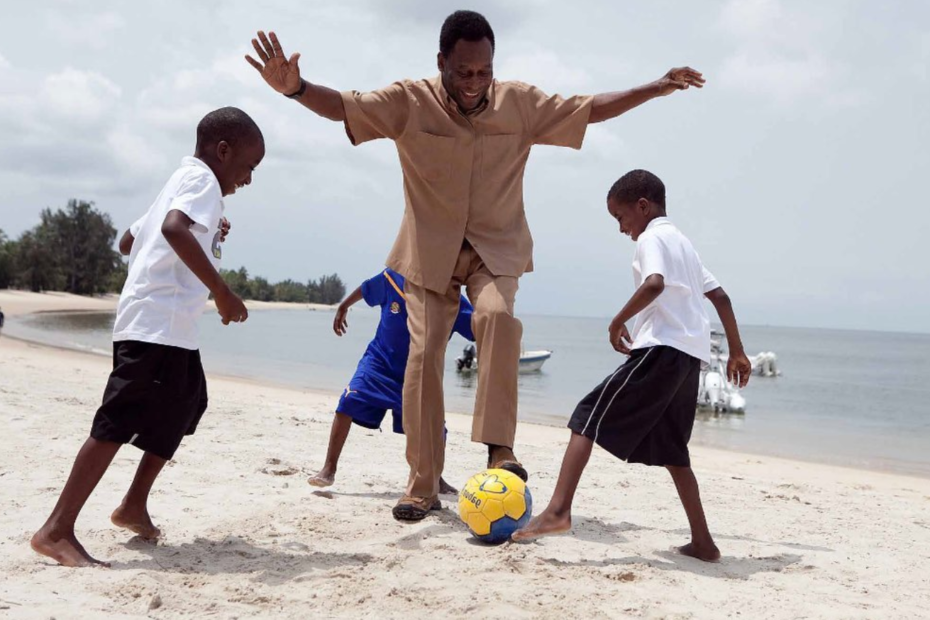 Pelé, also known as ‘The King’ and one of the greatest football (soccer) players of all-time, died at the age of 82 in São Paulo on December 29th. His cause of death was multiple organ failure, a complication of colon cancer – which he had been battling since 2021, when he had a tumor removed from his colon.

On December 30th, Brazil woke up to a world without Pelé for the first time in 82 years. His face was shown everywhere you turned, streets were packed with fans wearing his legendary No. 10 jersey, and the country lit up in his memory as the Brazilian government declared three days of national mourning.

The soccer community has responded in a major way in the days following the news of his passing. For example, a stadium in Bafatá is going to be named “Rei Pelé” in his honor, while a permanent throne for The King will be unveiled at Hidalgo Stadium – home of the Mexican team Pachuca of the Liga MX.

RELATED: 30 International Soccer Stars Who Will Make You Swoon

Pelé Had a Career That Left the Football Community Speechless

Pelé was born Edson Arantes do Nascimento in Três Corações, Minas Gerais – a municipality east of São Paulo. His parents named him after Thomas Edison, the American inventor behind the light bulb, phonograph, motion picture camera, and more. He shined shoes to pay for his obsessions with soccer.

During his school days, he earned the nickname Pelé after mispronouncing the name of one of his favorite players – Vasco da Gama goalkeeper Bilé. By the age of 11, he was already grabbing the attention of professional players and started playing for Santos’ youth squads, where he lit it up.

He didn’t necessarily have the size or the frame, but his skill and talent were too much to handle. He eventually earned a spot on the Santos’ senior squad, where his career blossomed – not just on the field, but off the field. In honor of his lasting legacy, let’s take a look at some of his most defining moments.

Thanks to his juniors coach Waldemar de Brito, Pelé tried out for Santos FC – a professional football club near São Paulo – in 1956. He was just 15 years old at the time, but he played well at the  Estádio Vila Belmiro and would end up earning himself a contract with the team after impressing the head coach.

A young Pelé made his senior debut with the club on September 7, 1956 against Corinthians Santo Andre. It was a small sample size of what was to come, having scored his first of many goals for the club in a convincing 7-1 victory – let’s not forget, this was a 15-year-old kid going against full grown men.

The 1957 season saw Pelé lead the league in scoring at just 16 years old. He was playing so well and garnered so much attention that he was pulled up to Brazil’s national team for the first time. He made his debut with the team on July 7, 1957 and scored a goal in his first game – which was only expected.

In fact, his first international goal would make history as he became the youngest player to ever score for his country – a Brazilian record that remains today. He would go on to score 77 international goals in 92 international matches during his career – if you want to count unofficial goals, he scored 95 for Brazil.

Pelé started the 1958 World Cup nursing an injury, but made his World Cup debut on June 15, 1958 in a game against the Soviet Union. He didn’t score, but he was credited with the assist on Vava’s second goal. They advanced to the knockout stage with two wins and one draw, where Pelé turned it up a notch.

He scored the lone goal in the quarterfinals against Wales and followed that up with a hat-trick in Brazil’s 5-2 victory over France in the semifinals. They were matched up against Sweden in the final, where Pele scored twice in a 5-2 victory – winning his first World Cup and scoring six goals in just 4 games for Brazil.

Following the 1958 World Cup, all eyes were on Pelé as he continued to prove he’s the best football player in the world. He ended up playing in all six games during the tournament and scored in five of those games – including 2 goals against Chile on March 15 and a hat-trick vs. Paraguay 11 days later.

He led all goalscorers with eight goals in six matches – the next closest was Jose Aveiro with six goals. He led Brazil to an unbeaten 4-2-0 record, but it wasn’t better than Argentina, the host country that finished with an unbeaten 5-1-0 record. Still, Pelé was named the best player of the tournament.

The 1962 Copa Libertadores was Pelé’s first major tournament since falling down with an injury that kept him out of most of the 1962 World Cup – which Brazil ended up winning. Pelé scored two goals in the final group stage game and twice more in the Finals playoff, leading Brazil to a 3-0 title over Peñarol.

Pelé was ready to defend his title the following year and that’s exactly what he did at the 1963 Copa Libertadores. Being the defending champs, Santos received a bye into the knockout stage. He scored 3 goals against Botafogo to advance to the finals, where he scored another goal en route to another little.

Pelé won his first Campeonato Paulista in 1958 and helped make Santos a regular winner of the tournament throughout the 1960s. They went on to win three-straight between 1960 and 1962, where Pelé led all goalscorers each year – totaling 118 goals in those three years, an incredible amount.

Not a whole lot is known about the validity of his trip to Nigeria – with some sources claiming it happened on January 26, 1967 and other sources claiming it occurred on February 4, 1969. Either way, it supposedly happened during the Biafra War between Nigeria and Biafra – it lasted from 1967 to 1970.

The story goes that Pelé and his Santos club traveled to Labos, Nigeria to play a game while the war was ongoing. Upon their arrival, both sides of the war agreed to a 48-hour ceasefire so  they could enjoy the game for what it was – entertainment. While the war continued afterwards, it shows how beloved Pelé was.

Pelé accomplished a lot in his career – I mean, A LOT – but one of his defining moments came on November 19, 1969 when the goal-scoring machine recorded his 1,000th professional goal, commonly referred to as O Milésimo (or The Thousandth). It’s something not many soccer players have done.

The goal came in a game vs. Vasco de Gama at the Maracanã Stadium in Rio de Janeiro, Brazil. It was towards the end of his career, but he was proving that age wasn’t going to stop him from finding the back of the net. It’s something he continued to do up until he retired, finishing his career with 1,279 goals.

The 1970 World Cup was the fourth appearance for Pelé and Brazil’s team would go on to be considered one of the greatest football teams of all-time. Pelé became just one of five players to score a goal in four different World Cups – as well as Lionel Messi, Cristiano Ronaldo, Uwe Seeler, and Miroslav Klose.

Pelé scored four goals in the 1970 World Cup and helped lead Brazil to the final against Italy. They didn’t face a lot of resistance, with Pelé scoring just 18 minutes into the game. Brazil scored three goals between the 65th and 86th minutes to win 4-1. It was Pelé’s third World Cup victory in four tries.

The 1974 season was Pelé’s final season with Santos as he announced his retirement from Brazilian club football. He would later come out of retirement to sign a lucrative contract with the New York Cosmos – the United States was starting to catch on to what soccer was all about and Pelé became the face of it.

Pelé made his debut with New York Cosmos on June 15, 1975 and scored a goal against the Dallas Tornado – though the game ended in a tie. He appeared in more than 100 matches for the Cosmos and scored more than 60 goals in those games. They won the NASL Soccer Bowl in 1977 – his final season.

4. The Finale Anyone Would Pay to See

On October 1, 1977, Pelé decided to bring his illustrious, legendary, and iconic career to an end in a way only he knew how. He brought his two clubs together – Santos and New York Cosmos – for an exhibition match. Pelé played one half for each team, with the Cosmos walking away victorious with a score of 2-1.

While Pelé failed to score for Santos – the team he played with for nearly two decades – he did score a 30-yard free kick for the Cosmos. It ended up being his final goal as a professional. It was an incredible way to go out and an incredible career that will forever go down as one of the greatest of all-time.

Pelé was a force to be reckoned with every single time he stepped foot on the field – there will never be another player like him – though Guinness states that Artur Friedenreich scored 1,329 goals over his 26-year career between 1909 and 1935, but they were undocumented and, therefore, aren’t verified.

Another one of Pelé’s most defining moments – one that came off-the-field, rather than on it – came in 1997, when he received an honorary knighthood of the British Empire. It’s a moment that he held near and dear to his heart as the Queen held a ceremony for Pelé at Buckingham Palace.

“Twenty years ago I had the great honour of being decorated by Queen Elizabeth II as an Honorary Knight of the British Crown. A moment that I will always keep in my memory. I thank all the British people for their affection,” wrote Pelé in an Instagram post in December 2017. It was a special moment for him.

1. Named FIFA Player of the Century

In December 2000, FIFA named both Pelé and Diego Maradona as the Player of the Century. Diego was originally named the winner due to an internet poll that favored him, but a ‘Family of Football’ committee composed of FIFA members favored Pelé. They decided to award both players with the incredible honor.

Pelé Will Forever Be Remembered as ‘The King’

All in all, Pelé had an illustrious, legendary, and iconic career that spanned from 1956 to 1977 – that’s more than two decades! He scored a total of 1,279 goals in 1,363 games during that time, most of which coming with Santos. He also holds a joint record of 77 goals for Brazil, which he shares with Neymar.

He was a global ambassador for the sport and made countless efforts to bring people together – even in times when hate was at an all-time high. His impact on the football community can only be matched by three other players in the history of the sport – Cristiano Ronaldo, Lionel Messi, and Diego Maradona.

YOU MAY ALSO LIKE: 25 of the Best Soccer Players of All-Time

He might not physically be with us anymore, but his legacy will live on forever and he will always be remembered as O Rei (The King). Our hearts go out to his family, who are celebrating a life well-lived. It doesn’t matter what country you normally root for, it’s safe to say everyone’s a fan of Brazil today.