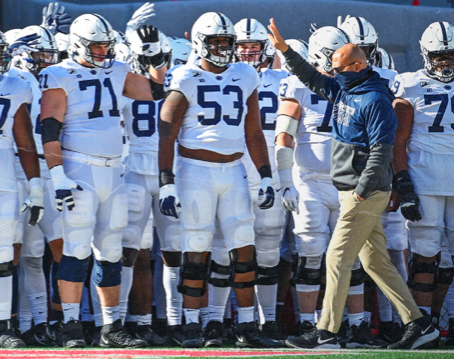 Penn State Head Football Coach James Franklin Faces Allegations Against Him For ‘Hazing,’ Telling Player ‘Not To Report A Fight To Police’

Penn State Head Football Coach James Franklin Faces Allegations Against Him For ‘Hazing,’ Telling Player ‘Not To Report A Fight To Police’

A former Penn State football player said head coach James Franklin alleges him not to report a fight to police according to ESPN.

ESPN states that Franklin told a player not to talk to police after a fight with another player—linebacker Micah Parsons—in 2018 which “involved punching, choking and a knife being pulled, according to allegations contained in a university report obtained by ESPN.”

The allegation was made by former Penn State defensive back Isaiah Humphries, per ESPN. According to ESPN, an investigator said in a “draft report that was part of a 2019 Title IX inquiry into sexual assault allegations in the Penn State locker room” where this accusation is located that”:

“Mr. Humphries added that Coach Franklin came and said, ‘Don’t talk to the police because Micah is his start [sic] player and makes money, so if he gets in trouble, he’s gone,’ meaning Mr. Humphries would be gone.”

A Penn State University spokesperson said in a statement to ESPN: “Franklin has made it clear that he did not instruct Mr. Humphries to avoid contacting authorities…We believe the claims relating to Coach Franklin have no merit, and we will continue to defend him vigorously.”

“This is disgusting what was allegedly done…if something like this were to happen and I’ve trusted this coach with my children or child, man, I would be (disgusted). Yes, (if allegations are true, he should be) fired, banned from NCAA football,” Chris Broussard said on Fox Sports Radio.

This comes after a January 2020 The Patriot News report claiming Franklin and multiple Penn State players were accused of hazing in a federal lawsuit.