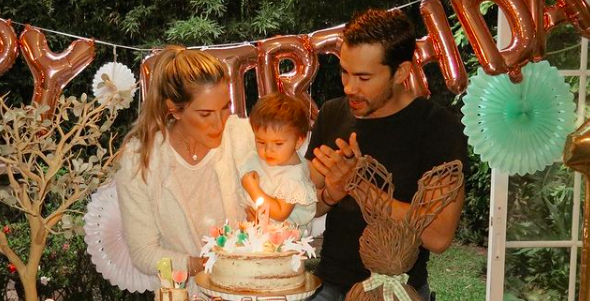 It’s been a trying year for so many, including golfer Camilo Villegas, his wife, Maria Ochoa, and their family.

Villegas golfed at the PGA Tour’s RSM Classic tournament and ended up with a great first round, golfing a six-under 64 in round one.

RELATED: Why Collin Morikawa is the Future of the PGA

“I got on the range and see a little rainbow out there, I start thinking about Mia and said, ‘Hey, let’s have a good one,'” Villegas said after round one of the tournament.

Villegas ended up having an incredible tournament, finishing at 16-under, just three strokes behind the winner of the tourney and tying for sixth place.

Villegas said that during round one the tourney the emotions didn’t distract him golfing but that the process of golfing in the tournament, with his brother out there, he was so focused on the game.

But, he got “a little bit” emotional when he said his daughter’s name during that interview per People.

“When I got on the range and I saw a rainbow, I mean, hey, listen, here it is (pointing to rainbow ribbon on his hat in honor of his daughter),” Villegas said. “She loved colors and rainbows and my wife was all about it. It was cool. It was a nice way to start the day.”

In a press conference at the Korn Ferry Challenge in June at the per Access, Villegas talked about Mia’s journey and how it’s been inspiring to him.

“It’s been, it sure has been tough…it’s inspiring, to see my little one fighting,” Villegas said. “I knew that was going to happen (getting emotional). I love golf. My wife wanted me to come here and just swing the club, get my mind away. She’s been really strong during the whole situation. Mia has been very inspiring. To be honest, to see a little one just fight for their life like this, it’s cool, man. It’s our reality…I tell my wife, we got no options but to be strong, to support her, and to send her good energy.”

“That’s what Mia has been doing for me the last couple months and my wife has been very strong,” Villegas said.

The Villegas family has a non-profit foundation called “Mia’s Miracles” in honor of their daughter.

It’s fitting that the logo of the organization is: a rainbow.

The organization aims to provide “small blessings with large impacts, bringing smiles and positivity to children and families facing challenging circumstances. We look forward to a day that all children and families receive access to reliable resources and a supportive network that leads to a hopeful future” per the website.

Here’s Maria Ochoa and Camilo Villegas’s letter on their website in the “About” section:

“Twenty-two months and two hours. Throughout this brief time our baby Mia lived a life of inspiration, hope and love. Her life was her MIRACLE and we are honored she chose us to be her parents. She fought the hardest during the last four months of her life, but her spirit continued to shine. Mia brought light and joy to all that came into her presence and because of that her spirit lives on. Mia’s light now spreads throughout our mission to help others, a mission to provide blessings and a mission to spread happiness during unforeseen circumstances.  Join us in celebrating Mia’s life and honoring her legacy through Mia’s Miracles. Mia’s blessings to us while she was on this earth will last the rest of our lives! Together we will find the miracles in each day. The miracles of life, hope, and love!

You can help Mia’s Miracles this Christmas season by donating and funds raised “for the next month will go to ensure children in need are able to experience the joy of the holidays. Get to know some of the children that will be receiving your MIRACLE!”

If you’d like to support Mia’s Miracles, you can do so here.