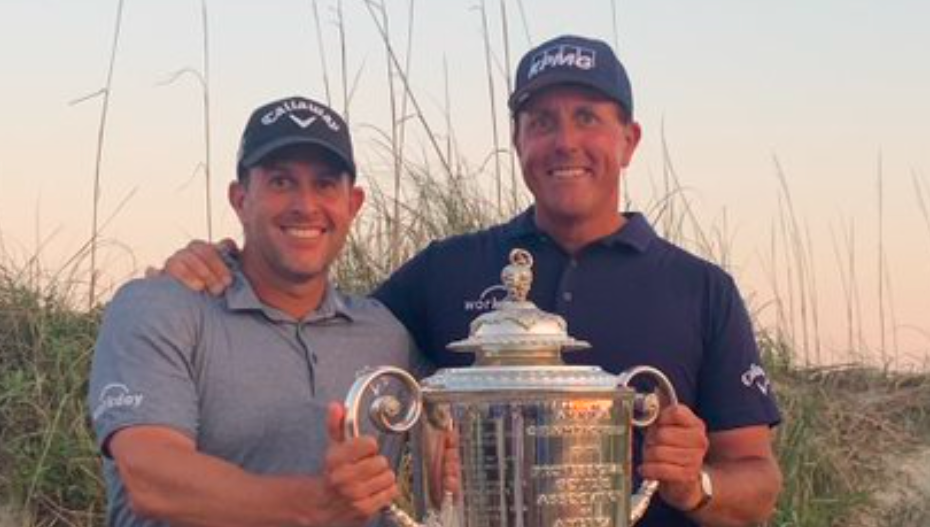 Brotherhood. It’s something special. Something not to take for granted. Something to be embraced.

You have to see this embrace after a long, hard-fought historic PGA Championship victory with Phil doing the golfing and Tim doing the caddying. The first person Mickelson celebrated with was his brother.

Family can so crucial to one’s success. The love, the support, the positive words of affirmation and encouraging reminders of who one is and who one can become can be absolutely refreshing and important in pursuing one’s dreams. Those who’ve been there with you through the high’s and low’s, the hill’s and valley’s can make the victories that much sweeter to celebrate together.

Phil and Tim did exactly that after Phil won the PGA Championship becoming, you know, “the oldest golfer to win a major championship” per the New York Times’ Bill Pennington.

“This is obviously awesome,” Tim Mickelson said per GolfDigest’s Tod Leonard. “Any win is special, but to win a major championship at this stage of his career, I definitely teared up for the first time since caddying for him four and a half years ago.”

Leonard stated that “Phil Mickelson credited Tim for his work during the week at Kiawah Island (where the tourney was held), where caddies and their players were challenged on every single shot because of the wind coming from various directions off the Atlantic Ocean.”

“This is an intangible that makes him relatable or understand me, get the best out of me and makes him a great caddie,” Phil Mickelson said per Golf Digest. “I’m walking off 6 (in the final round); I had made some uncommitted swings the first six holes. I had been striking the ball awesome the first three days. I had a wonderful warmup session, like I was ready to go, and I made some uncommitted swings the first six holes. He pulled me aside and said, ‘If you’re going to win this thing, you’re going to have to make committed golf swings.’”

Mickelson went on to do exactly that.

“It hit me in the head, I can’t make passive—I can’t control the outcome, I have to swing committed,” Phil said via Golf Digest. “The first one I made was the drive on 7. Good drive on 7 gave me a chance to get down by the green and make birdie. From there on, I hit a lot of really good shots because I was committed to each one.”

The same rang true at the PGA Championship’s final round except this time, this embrace after this win was an historic embrace.

A brother caddying for his big brother.

Through the storms of life, the Mickelson’s have had each other’s back seemingly whether caddying or not. And this historic win in the PGA Championship was no different.