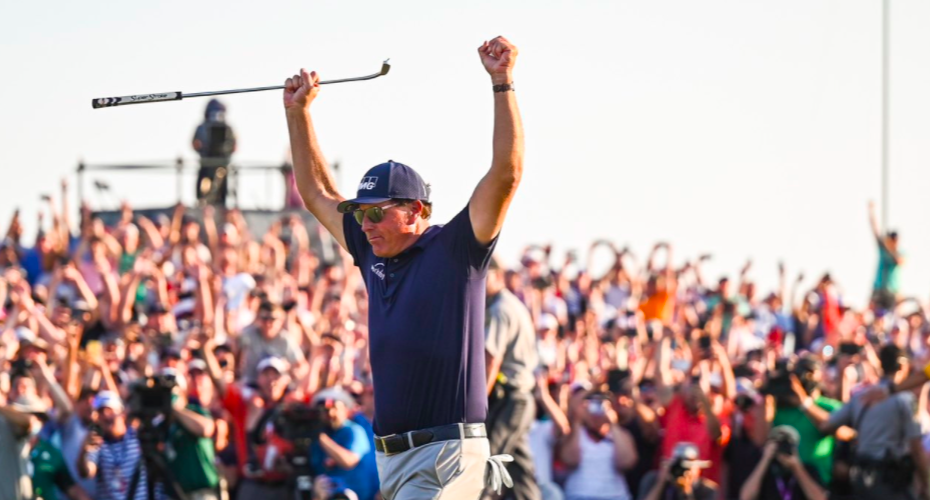 Phil Mickelson did it. Five decades didn’t define what golf’s well-known left-hander could do in a major tournament. Mickelson won the PGA Championship, golfing a 282 (six-under) finishing two strokes ahead of Louis Oosthuizen and Brooks Koepka.

What makes this one special, you may ask?

Well, “at 50 years of age, Mickelson became the oldest major winner of all time” per The Guardian’s Ewan Murray.

Here’s that info again for the people in the back…gallery.

The “(f)ifty-year-old becomes oldest major winner of all time” according to Murray.

RELATED: Sportscaster Ernie Johnson Shares Emotional Message About COVID-19 and His Son During ‘The Match’

And Mickelson reflected on what this major win means, giving encouragement to anyone else out there who wants to pursue a dream, no matter what season of lie you’re in.

“I just believed that it was possible but yet everything was saying it wasn’t,” Mickelson said per The Guardian. “I hope that others find that inspiration. It might take a little extra work, a little bit harder effort to maintain physically or maintain the skills, but gosh, is it worth it in the end…I just love this game of golf. I love what I do and I love the challenge of competing against such great players.”

The thrill, the feeling of accomplishment, the sense of being a part of history not only was celebrated by Phil but so many more people who knew exactly what this win was about.

The Guardian compiled tweets from around the golf world, along with that dude who won seven Super Bowls, who sent their congrats Mickelson’s way.

Woods and Mickelson have a mutual respect for each other’s game. Per Golf.com’s Nick Piastowksi: “As Mickelson has often said, Woods, in fact, motivated him to play better (in particular after the 2001 Master’s).”

Mickelson replied to Woods, saying: “Thank you. I’m pulling for your quick return.”

The PGA Tour mentioned a fun fact: “Since teaming up for The Match, @PhilMickelson and @TomBrady have each made history. Oldest player to win a major. Oldest QB to win a Super Bowl.”

Mickelson responded to Brady, saying: “We have some unfinished business. Let’s get another match and find a pair to give a beat down.”

“Hey Phil, 50 years old is older than 46,” Jack Nicklaus said jokingly in a tweet where he also included a congratulatory video. “Congratulations, my friend.”