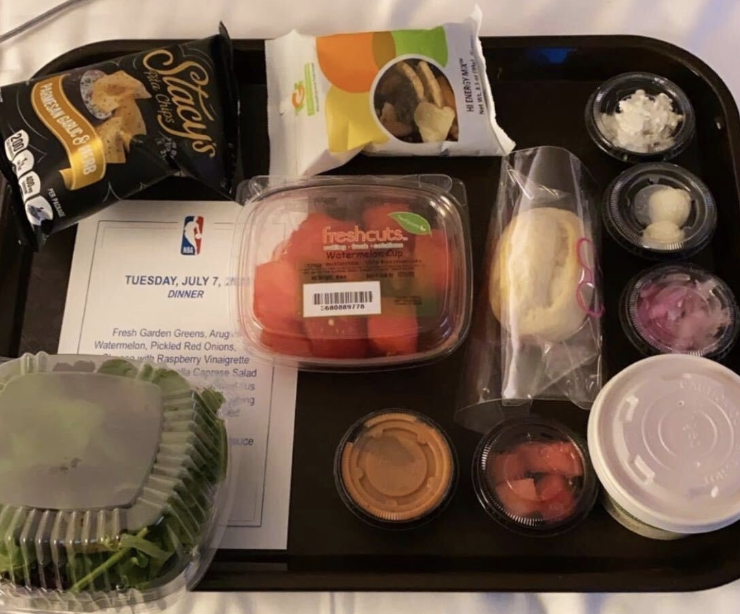 A photo of the food served to players at the NBA’s bubble at the Walt Disney World Resort in Orlando has gone viral, and was certainly not as impressive as people had expected.

Both Chris Chiozza of the Brooklyn Nets and Troy Daniels of the Denver Nuggets shared snapshots of their first meals, one of our first looks into what the life of the players at the resort will be like.

Chiozza’s photo showed an opened watermelon salad, along with an entree that is Italian chicken in natural jus, plain pasta, and polenta (judging by a photo of the menu leaked on Twitter).

Daniels shared a fully unboxed image of the appetizer portion of the meal, which contains a roll, several bags of chips, and a mixed greens and watermelon salad.

While neither meal looks terrible, it is most likely to up to the general standards NBA players are used to.

RELATED: NBA Star, Bradley Beal, Will Not Head to Orlando

The images began to draw comparisons to the infamous Fyre Festival food photo, one of the ultimate disaster fiascos in recent memory in terms of overpromising, and subsequently under delivering.

However, the situation at Orlando for the newly arrived players should eventually improve, as the rather dull meals are “isolation food,” with the players being forced to quarantine until they get 2 COVID-19 negative tests in 48 hours.

The food is reportedly supposed to improve once they are able to exit isolation, though images of the enhanced meals are not yet available.

Evan Fournier of the Magic also shared a video of his room at the Grand Floridian hotel, which includes a nice lakeside view.

So far, players from the Brooklyn Nets, Denver Nuggets, Orlando Magic, Phoenix Suns, Utah Jazz, and Washington Wizards have arrived at the resort complex, with the rest of the teams set to arrive in the following weeks and days leading up to the restart