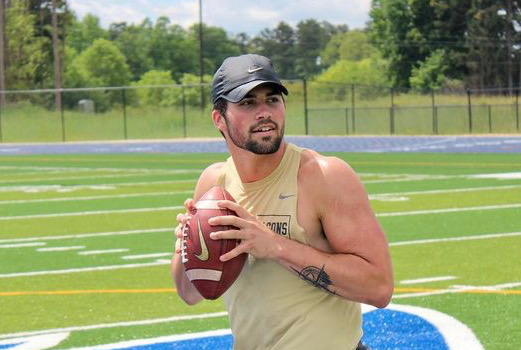 When Wake Forest University’s quarterback Sam Hartman consistently threw four interceptions during a bowl game against Wisconsin and cost his team a win in 2020, he did not anticipate that his life was about to see significant improvements.

When Hartman met with friend and fellow quarterback John Wolford, he had pushed the memory of losing to Wisconsin to the very back of his mind. Letting down his team was something he wished to repress, so when Wolford began asking about the match, the Wake Forest student-athlete had no desire to discuss the disappointment and re-live his regrets.

Instead of accepting Hartman’s hesitations to open up, Wolford suggested Hartman seek therapy.

The 22-year-old had a long history of ignoring emotions that were difficult to handle, which began when he lost his brother to suicide. Demetri Allison moved in with the Hartman family when Sam was only 15 and they quickly became close, Sam idolizing Allison as an athlete. But when Sam lost a person he felt connected to, he didn’t confront his feelings of grief. Instead, he showed them deep down, afraid to express emotions that others would see as weak.

However, continuously compartmentalizing his emotions and not addressing them hindered his ability to live a life with ease. As his mental health declined, Hartman had the courage to admit he needed intervention.

The beginning of Sam Hartman’s journey to stable mental health

“It was to a point where I knew something needed to change,” the quarterback recalled, according to ESPN. “I’d always done a good job of hiding it. Growing up, that’s what you’re taught to do. But I was finding it tougher and tougher to push through the mental side of anxiety and stress. It was kind of a point of no return.”

When Hartman began meeting with a psychologist one to two times a week, he learned positive coping skills that have aided in his general well-being and allowed him to better connect with his teammates. When he loses games, he no longer beats himself up and chooses to reflect on how he can improve his skills. In addition, he took it upon himself to ensure supporting his teammates went beyond the sport of football.

“We’re taught to train and suppress,” said Hartman. “So you always want to make sure when a guy says he’s good that he’s really good. As much as I’m trying to work on myself, I’m checking in with guys and take them out to dinner and leave the football aside. That’s been one of the big takeaways, that when I say, ‘I’ve got your back,’ it’s not just a clichéd saying. It’s the truth.”

This tactic has created a positive dynamic with his fellow athletes, and through this healthy means of relationship building, it reflects on the entirety of the Wake Forest football team. Head coach Dave Clawson has reported, “Guys have improved and are performing better because they feel like they have a relationship with their quarterback… their quarterback invested time in them, not just as football players, but as people.”

Seeing as his health and mood has improved since allowing himself to freely express his emotions, Hartman hopes to decrease the stigma in mental health awareness. His mother, Lisa Hartman, also experiences a similar perspective and even questioned if her adoptive son would still be alive if repressing mental health wasn’t so common.

“If that stigma didn’t exist, maybe Demetri would still be here with us,” she commented. “Nobody had any idea he was suffering or for how long.”

Given his unique and harrowing experience with the topic, Hartman embraces his emotions so that he can have a better relationship with himself and others. Despite a world that often sees mental health awareness as ‘soft’, the athlete admitted, “You can’t be soft on everything, but there’s a line you have to create in your mind of, enough is enough of the hardness on yourself.”

He then concluded, “Everybody has demons. Everybody has stuff they need to talk through. I’ve got this platform, and if I can impact one person’s life, that’s a job well done.”