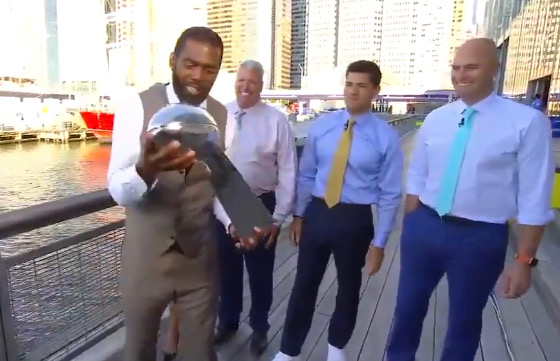 Randy Moss, 44, Gets His Hands on a Lombardi Trophy and Immediately Tosses it Into the East River to See If It Floats

Former Minnesota Vikings wide receiver Randy Moss recently got his hands on a Lombardi Trophy during a segment on ESPN’s NFL Countdown. Upon having access to the highly acclaimed award, Moss followed in Tom Brady’s footsteps and aggressively chucked the trophy directly into the East River.

In February of 2021, after Tom Brady had yet another Super Bowl under his belt, the Tampa Bay Buccaneers’ quarterback decided to drunkenly throw the Lombardi Trophy in between boats during the team’s exciting celebration taking place on the Hillsborough River.

After making headlines that he did such a foolish thing, the daughter of the Lombardi trophy designer demanded an apology from Brady. Lorraine Grohs, who is the descendant of the silversmith’s trophy, shared on Fox4, “It just upset me that this trophy was disgraced and disrespected by being thrown as if it was a real football.”

“I have a big history of this trophy being made by my father and it’s such an honor and I know all the craftsmen that made it when my dad was there also at Tiffany’s and it takes a lot of hard work,” Grohs continued before she demanded an apology from Brady. “I personally would like an apology, not just to me and my family and the other silversmiths but to the fans, all the football fans the other team players.”

RELATED: The REAL Reason Jennifer Garner, 49, Is Excited for Back to School: She Wants to Watch High School Football!

As many assumed the trophy was lost forever to the depths of the Hillsborough River, people were rightfully upset. However, Randy Moss conducted his own experiment which proved Tom Brady’s decision was just to raise eyebrows

Initially, when the trophy was handed to him, the retired NFL star was surrounded by his other ESPN hosts, such as Tedy Bruschi and Rex Ryan. Bruschi made the prediction that the trophy would hit the bottom of the river and claimed, “This is gonna sink, just like this, straight to the bottom.”

Using all his might, Moss hurled the silver accomplishment directly into New York’s river and the crowd patiently waited for the answer. Soon after the object had been chucked, the ESPN crew erupted with shouting and their predictions, only for it to became clear that the trophy does have buoyancy!

The mystery was solved and our society learned the Tom Brady didn’t deserve the scrutiny.