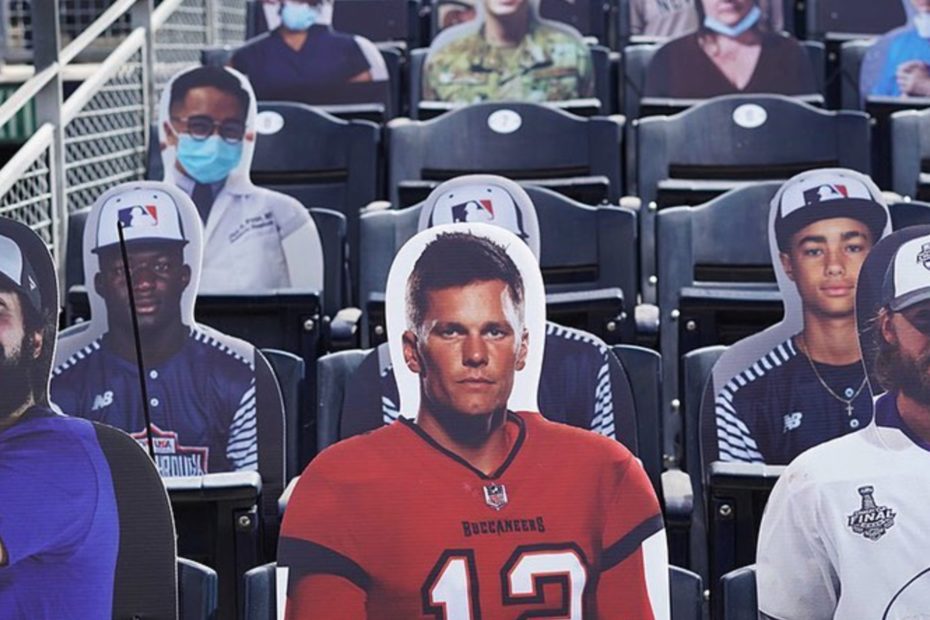 Cardboard cutouts have been a real thing in professional sports over these past few months. Whether they have taken the shape of real fans, family members of staff, or even cartoon characters, the cardboard cutouts were more than just placeholders for real people. Some of the cutouts have even been used to raise money for charity.

These almost surreal moments in sports has been an adjustment for everyone. Mississippi State head football coach Mike Leach said the cutouts make him feel as if he’s in the Twilight zone.

However, cardboard cutouts in the stands may be a thing of the past sooner rather than later. In Texas, according to People, fans will be allowed back at MLB games for the NLCS Championship Series, making it the first time an MLB team has allowed fans in the stands since March.

The MLB announced that around 11,500 tickets would be available for the games that are scheduled to be held at Texas Rangers’ ballpark in Arlington, CNN reported. That also includes that World Series.

And come they did. On Monday, all 11,000 of the tickets for Game 1 of the Braves vs. Dodgers series were sold, according to People. The Braves went on to win 2-1.

Braves first baseman Freddie Freeman told CNN that the 11,000 people allowed in the stands “really felt like 50,000 people to us because we haven’t had any all year. It was just great to hear cheering from both sides of the teams. It’s just great to have baseball fans in the stands again. Hopefully, they were very happy for the first game of the 2020 season and hopefully they come out tomorrow and get another good show.”

However, according to CNN, the day the fans were welcomed back into the stadium on Monday, it was also the same day 33 US states recorded an increase in COVID-19 cases.

And while there are strict precautions in place to focus on the health and safety of players, staff, fans, and managers, players like Freeman and Ronald Acuña Jr. are welcoming fans in with open arms.

“I’m overwhelmed with joy to have fans back in the stands…The season never felt the same without them, and it goes without saying, we miss them dearly,” Acuña Jr. told ESPN.