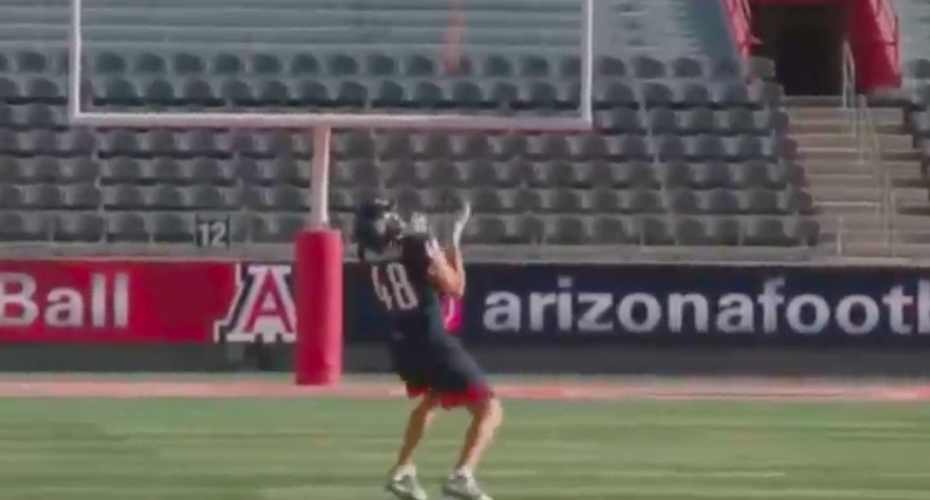 Rob Gronkowski is a Super Bowl champion. A tight end who is known for making big plays and that signature Gronk-spike after he scores a touchdown. Gronk’s got 86 career touchdowns to his name. If he spiked the ball each time he got a touchdown, that’s a lot of spikes!

The tight end also has a lot more awards as a five-time Pro Bowler, four-time All Pro, and was the 2014 AP Comeback Player of the Year. Not to mention those four Super Bowl wins.

This time around, though, Gronkowski would win another title in the form of a world record.

Headed back to where he played college football at in Tucson at the University of Arizona, Gronkowski hit the field to “Bear Down” as Arizona Wildcats say, and attempt to catch a ball thrown out of a helicopter over Arizona’s football stadium.

RELATED: ‘I’m Going To Give It A Big Kiss’: Rob Gronkowski And His Complicated History With the Lombardi Trophy

As you may have seen, that third attempt did the trick. Gronkowski said it was a “625ft catch” on his Instagram post. And catching a football from that high in the air, in front of the current team at his alma mater, isn’t complete without yet another Gronk-spike celebration.

These dudes have a lot in common! And Bruschi was there to see Gronk do his thing and excitedly shared the record on his Instagram, as well.

“Gronk kicks off the weekend for @arizonafootball by catching a football dropped out of a helicopter 600 feet in the air,” Bruschi said in the Instagram post. “New world record! Spring game tomorrow! Let’s go!”

When it comes to the NFL, you already know Gronkowski teamed up with his quarterback, Tom Brady, taking their talents to Tampa to win yet another Super Bowl title.

Here’s what Brady had to say about his tight end’s world record. “Not sure I’ve ever seen you drop anything 🤔,” Brady commented on Gronkowski’s post.