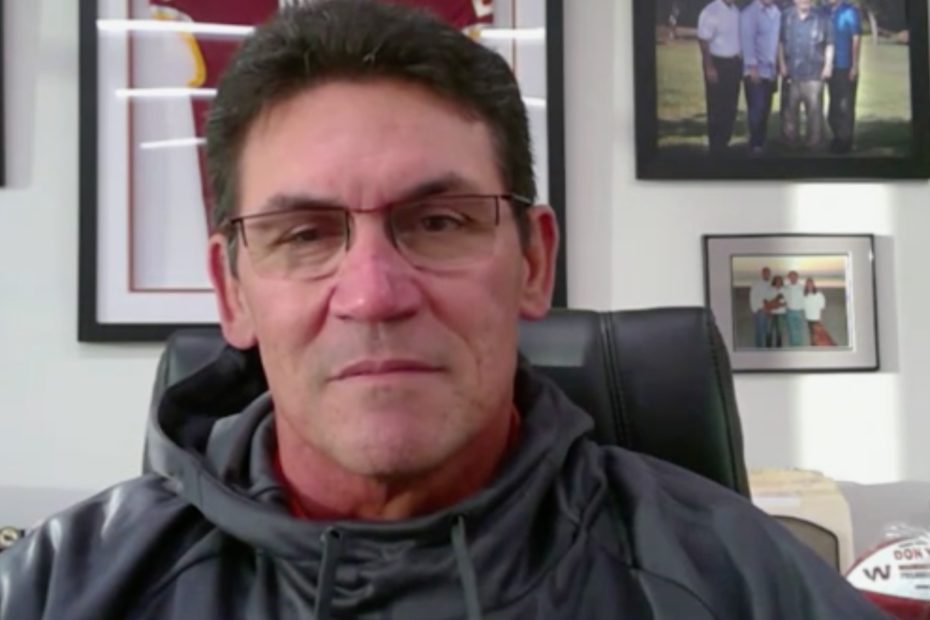 While Washington Football Coach Ron Rivera is formulating gameplans for game day, he’s also battling a form of skin cancer and plans on continuing to coach as he gets treatments. While a guest on Good Morning America, it was reported that Coach Rivera receives five treatments per week.

After Washington’s game against the Ravens on Sunday, Rivera shared his post-game routine with GMA, which consisted of hydrating, going home, and trying to eat. Before he “watched a little football. I honestly was in bed by about 8.” He went on to say that he was feeling “pretty good.”

“First of all, it’s who I am,” Rivera told GMA regarding his decision to keep coaching despite battling cancer. “Listening to the doctors talking about how important it is to try and do as much of your routine as possible, but they also tell you be careful, listen to your body… There’s also people watching me. I’m trying to set the example.”

And he’s not going through this alone. There’s a rallying cry among the team, its players, fans, NFL community, and people “around the world” getting encouraged from what’s being termed “#RiveraStrong.” In Washington Football Team President, Jason Wright‘s, Weekly Brief, he revealed that he admires Rivera’s strength during such a difficult time.

“…It was hard for me to walk away from the game discouraged due to the visible improvement across several aspects of the game and the remarkable display of strength, courage, and character from Coach Rivera. Much has already been written about the challenging week of treatment that Coach endured, and those who watched the television broadcast saw his physical strength and mental resolve as he fought to remain physically present on the sideline with the team. It left many inspired in our club and around the world…I’ve been privileged to see his mental and physical endurance each day at Inova Sports Performance Center as well as the way Coach’s close circle has supported him. Stephanie Rivera is a coach herself, and she is displaying that same steadfastness and inspirational leadership as she helps lead Coach through this fight. I find their relationship, the way they navigate this challenge, and their continued focus on serving others in the midst of everything to be remarkable. I took this job, in part, because I knew about Coach’s strong character. I had no idea how deep that strength (#RiveraStrong) really went, and I’m an astonished witness to it.”

And while coach is extremely grateful for all of the support, so is his wife, Stephanie Rivera, who tweeted a thank you to those who have reached out and sent prayers.

“When you see things like this [from] people that support you and the notes I’ve gotten, the letters I’ve gotten, it’s tremendous…It really just shows you you’re really not doing this by yourself. There’s a whole bunch of people helping you do this,” Coach Rivera said in response to the over 400 cardboard cutouts the team made to surprised him with in the Coach’s Corner of in the stadium.

Coach Rivera also talked about the importance of affordable, accessible quality healthcare for those battling cancer. “There’s so much that goes into this and it’s so expensive…we’re the richest country in the world, we should, everybody deserves the opportunity to fight and fight with everything that they’re given.”

He then urged those who are eligible to vote. “And this is the opportunity now. So, people gotta’ go out and they’ve gotta’ vote. They gotta’ vote their conscience because it’s important.”

Ron Rivera now has three weeks left of treatments and one more cycle of chemo to go. While quoting the late sports reporter Stuart Scott, “I have it. It doesn’t have me. It’s not how far I have to go but it’s how far I’ve gone.”