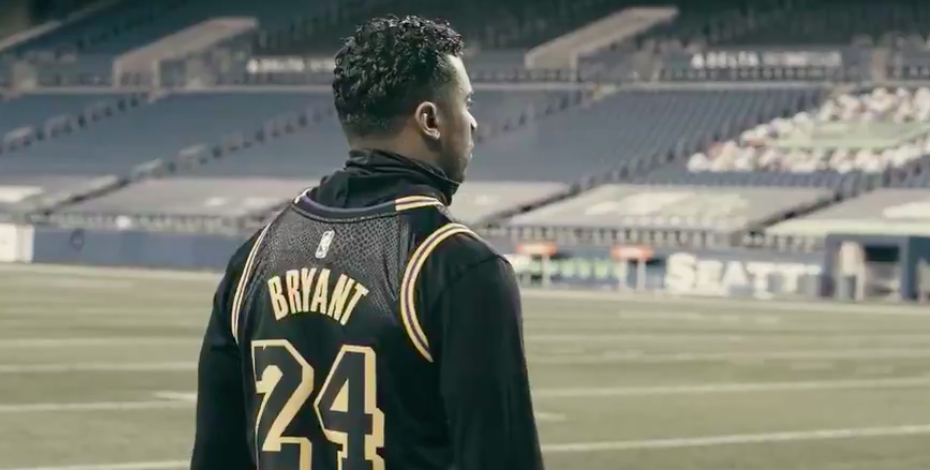 “MAMBA”. That’s all that needed to be said by Russell Wilson. The potential 2020 NFL MVP Seahawks quarterback recently walked into his home stadium rockin’ a Kobe Bryant jersey and needing that ‘mamba mentality’ in a crucial game.

“I wanted to wear this jersey to honor you (Kobe) today for the NFC West championship and the shoes, the (Nike Kobe) Grinch shoes,” Wilson said. “(Vanessa Bryant), shout out to you for sending them. Your family means a lot to my family. We love you all. For this game, we had to bring the mamba mentality, the last drive.”

Wilson was feeling it as his team won that day, 20-9 over the LA Rams, winning the NFC West.

Russ had a touchdown pass and threw for 225 yards. Looks like Russ had the mamba mentality in this game (and really, every game in 2020).

After the game, Wilson continued rocking the jersey in his postgame press conference and in this touching tribute video he posted.

Shortly after clinching the NFC West title, the video shows Wilson walking back onto the field by himself with a touching tribute to Kobe and Gigi.

In the background to start out the video, the classic old hymn “Great Is Thy Faithfulness” is playing. The lyrics of that hymn include: “Morning by morning new mercies I see; All I have needed Thy hand hath provided—Great is Thy faithfulness, Lord, unto me!…a peace that endureth, Thine own dear presence to cheer and to guide; Strength for today and bright hope for tomorrow.” What a powerful message of hope and trust during a difficult, trying time. That even though pain may come in the night, joy may come in the morning.

“Oh that’s how you feelin today🐐,” somebody commented on the post.

I guess so! Not only did Russ have on the jersey, he was rocking those special Kobe Nike Grinch shoes people have been wanting, aviators, and a nice watch, walking into the place like a man on a mission. Yes, Russ was feelin’ some type of way, wanting to clinch the division and needing to have that mamba mentality to win it.

“💜💛,” another person simply commented on that picture.

Wilson wore the mamba jersey with Kobe’s #8 in front and the back having #24. Of course, those were both Bryant’s numbers throughout his career. Bryant started with 8 and finished with 24.

Wilson posted that tribute video after winning the NFC West on December 29, 2020.