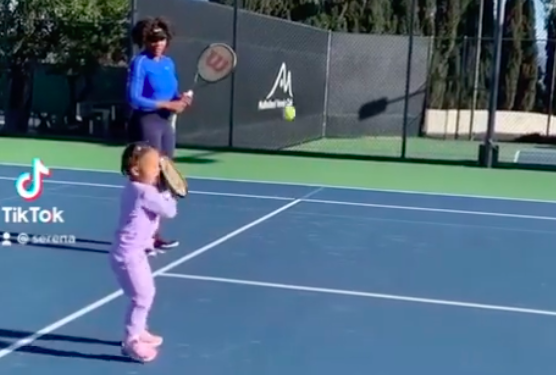 Twenty-three time Grand Slam winner Serena WilliamS took the court to get some practice swings in but this time, she had a partner with her.

It wasn’t Venus Williams, her usual doubles partner, this time.

It was her daughter, Olympia, practicing alongside her mom. Willams posted a video with her and her daughter side-by-side on the court.

People were all for this:

Along with Olympia getting some practice tennis swings in, there was an adorable moment where she asked if her mom needed “one more” tennis ball so her mom could keep practicing.

The mother-daughter duo both seemed to be organized and in sync as they practice together and it looks like Olympia is already as detirmned as her mom to succeed as she wanted to keep on practicing:

“It’s my turn!” Olympia said taking practicing swings next to her mom.

You never know, down the road, it may be her turn to carry on the Williams’ tennis legacy as her own Olympian. But, wherever she ends up in her career and in life, I’m sure she’ll be great at it, bringing that winning mentality to whatever she does because, well, it’s in her DNA.