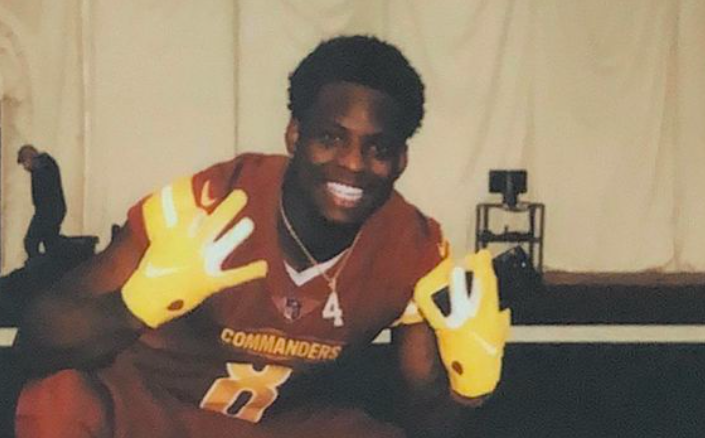 Brian Robinson, 23, of the Washington Commanders Shot at During Attempted Carjacking Incident

NFL running back Brian Robinson was shot in an attempted carjacking in Washington, D.C. on Sunday, according to the Washington Metropolitan Police Department.

Robinson, who currently belongs to the Washington Commanders, is reportedly in good condition and does not risk sustaining life-threatening injuries.

The rookie was shot twice in his lower body at 1000 block of H Street Northeast when the NFL player was attempting to get something to eat. He was held up in an attempted robbery, to which he was shot once in the glute and once in the lower leg. As of now, there are two suspects in mind after the police recovered a firearm a short distance from where the shooting occurred.

Although the 23-year-old running back was hospitalized for injuries related to the shooting, his team is not ruling out his ability to play in this upcoming season. Ron Rivera, head coach for the Washington Commanders, visited his player in the hospital and reported that Robinson is expected to make a full comeback.

Washington Commanders thanks everyone for ‘kind words, prayers and support’ in regards to Brian Robinson

“He is in good spirits and wanted me to thank everyone for their kind words, prayers and support,” the coach shared. “He wants his teammates to know he appreciates them all for reaching out and he loves them all and will be back soon doing what he does best.”

According to ESPN, one of the most promising aspects of his player’s recovery is the fact that he is remaining positive. Rivera said, “The doctors were very positive with him and he was very positive as well. He’s very fortunate. He’s doing well. It will be a matter of time before he’s back out here. There’s no timeline, but everything was very positive.”

In terms of his ability to play in this upcoming season, the head coach shared that they are awaiting clearance from the team’s doctor following his recovery. Rivera relayed, “It’s just about the healing process, and once he’s well enough to get on the field, doctors have to clear him and we’ll go from there.”

The coach also shared that his teammates are hopeful for Robinson to make a full recovery. When the shooting was announced during practice on Monday, they all expressed their sympathies for the rookie running back. “I know their hearts are heavy right now because a lot of them are thinking about Brian. But we’re very fortunate, he’s very fortunate that a lot of the news is positive,” Rivera explained.