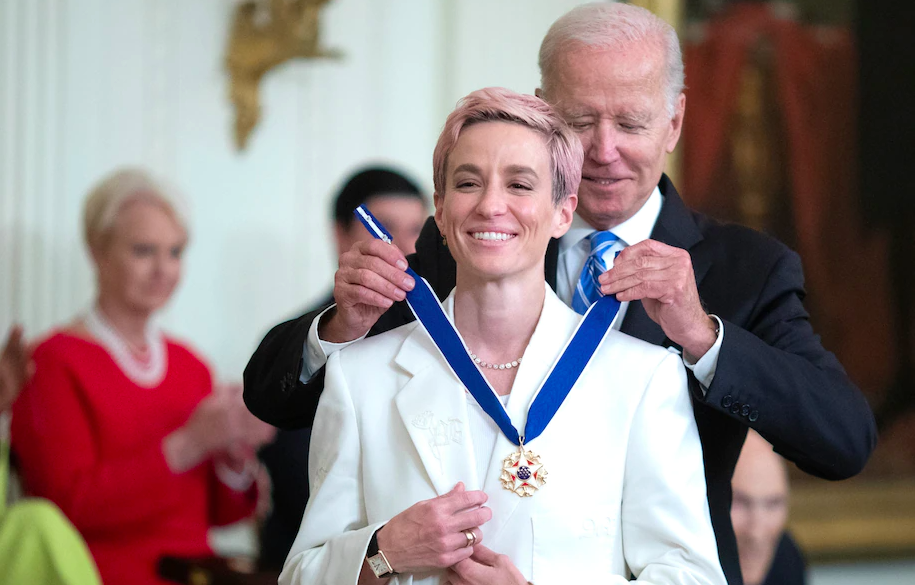 “Beyond the World Cup titles and the Olympic medals, Megan is a champion for [an] essential American truth that everyone — everyone — is entitled to be treated with dignity and respect,” the 46th President said of Rapinoe during his speech.

Rapinoe is largely celebrated for her dedication to gender equality, more specifically when she fought for women soccer players to have the same pay as the male teams. Biden shared, “Megan did something really consequential, she helped lead the change for perhaps the most important victory for anyone on her soccer team, or any soccer team: equal pay for women.”

When Rapinoe spoke of being honored, she expressed her disdain for gender discrimination and how she stands for all women that are victims of inequality. “I know there are millions of people who are marginalized by gender in the world and experience the same thing in their jobs,” she said during the White House event. “And I know there are people who experience even more, where the layers of discrimination continue to stack against them. And I and my teammates are here for them.”

The soccer star added the sentiments, “We on the U.S. women’s national team are here today because of them.”

In addition, Biden took note of Biles and her accomplishments as the most decorated gymnast of all time. “Today, she adds to her medal count of 32 – I don’t know if you’re gonna find room,” he joked. While he could casually joke about her talents, the president made sure to acknowledge the hardships the gymnast has faced and her courage to speak up against sexual assault to promote the general welfare of others.

“To turn personal pain into a greater purpose, to stand up and speak for those who cannot speak for themselves,” relayed Biden, explaining why the gymnast is particularly deserving of the honor. Over the past year, Biles has dedicated her time to bringing former Team USA gymnast doctor Larry Nassar to justice, as he abused her and countless other women over the course of multiple years. Due to her bravery, he is set to be behind bars for the rest of his life.

At the age of 25, Biles is the youngest athlete to be awarded the Medal of Freedom besides Tiger Woods, who was awarded it at the age of 43. Alongside the Olympic athletes, fifteen other individuals were honored. The Presidential Medal of Freedom is largely considered the highest honor to be granted to a United States citizen.