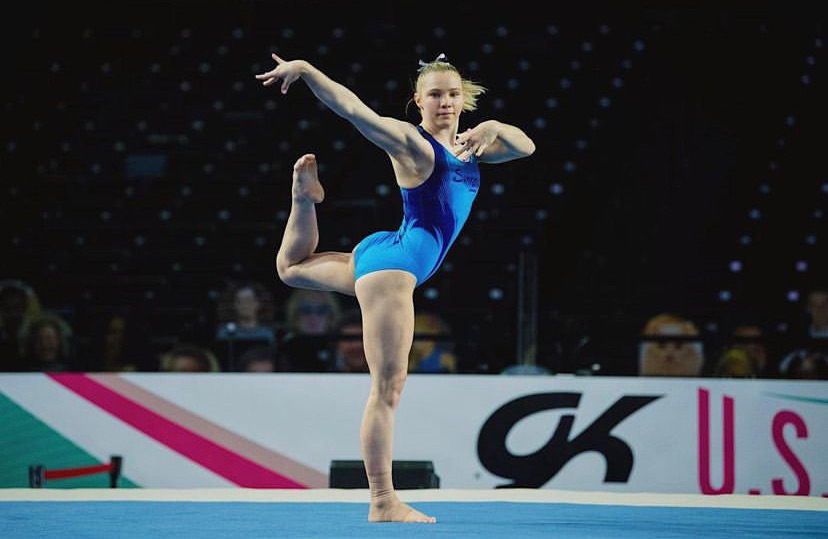 Twenty-one-year-old, Jade Carey, became the first U.S gymnast to earn a spot in next month’s Olympics on Team USA. Fellow gymnast, Simone Biles, is also projected to the top spot on the United States team. The U.S. Trials occur this weekend, June 24th-27th, in St. Louis, to which the rest of the official roster will be announced.

In a prior interview before her spot was coined, Carey told People that, “It would be amazing just to be there and represent my country. It’s unbelievable…Just being a role model for little kids is a really cool thing that happens.”

However, Carey also looked to Simone Biles as a role model for Olympian procedures. Carey referred to Biles during an interview with People, stating, “She definitely just reminds us to have fun and she’s just really awesome…Like we know that we can go to her for anything because she’s been there and she’s done it all so she knows exactly how everything goes.”

While Carey can use Biles for comfort in the midst of this pressure-filled event, she deserves credit where credit is due. Her hard work and dedication have led her to earn a position on Team USA. Since 2018, the young gymnast has been competing in multiple World Cup competitions, which ultimately led to her receiving a spot in the Tokyo Games.

Jade Carey spends her time focusing on the Games!

“I have every intention to accept the individual spot that I worked very hard to earn by competing in the Apparatus World Cup Series spanning from 2018-2020 when officially offered to me,” said Carey in a caption she wrote on Instagram. She added, “My focus right now is preparing to compete at the Olympic Games in Tokyo and being able to contribute to Team USA in any way possible.”

According to People, in June Carey competed with a routine no female gymnast had ever done before, a triple-twisting double layout on the floor. Carey stated, “Definitely vault and floor are my strongest events. I can put up a pretty good score on those two.”

RELATED: Veteran Olympians Ashlyn Harris, 35, and Ali Krieger, 36, are Upset to not be on This Year’s Olympic Team

As the 21-year-old gymnast prepares for perhaps the most exciting event of her career, she is hoping to, “really enjoy it all ’cause it’s a once-in-a-lifetime opportunity,” and went on to say, “I just want to be able to remember it and enjoy it all, but also just compete really well and represent my country good.”

Despite her spot in the competition, the world can still view Carey performing at this weekend’s trial, alongside many other talented athletes.