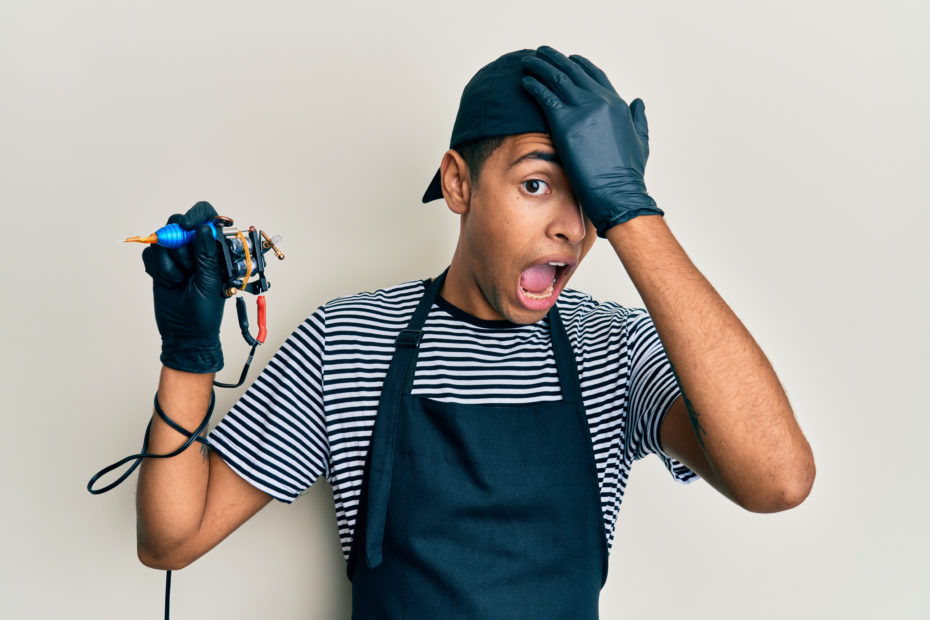 20 Sports Tattoo Fails That Will Make You Laugh

We all know that tattoos are permanent and we all understand the amount of pressure involved in getting a tattoo, but that didn’t seem to stop some fans from getting some of the most hilarious, cringe-worthy sports tattoo fails of all-time. Now, they have to live with it their entire life!

Some of those fans thought they were being creative when getting their tattoo, but weren’t too thrilled with the end result. Some of them chose to accept the tattoo for what it is and are proud of their terrible tattoo. Of course, other fans lost a bet and now have to wear their punishment.

It doesn’t matter what the reasoning is behind some of the worst sports tattoo fails of all-time, there’s no recovering from the ink that’s now permanently on your skin. Sure, there might be ways you can remove it in the future, but it’s not an enjoyable process and is highly expensive.

If we’re going to rank out the worst sports tattoo fails of all-time, we can’t focus on any one sport in particular. We have to consider fans of any sport, no matter what team they root for, who their favorite player is, or how bad their tattoo really is. Nothing is off limits and everything is game.

What we love most about these sports tattoo fails is that they’re all bad for different reasons. Some are horribly drawn, some are horribly thought-out, some are in odd or awkward places, some are factually incorrect, and some are just flat-out embarrassing – they’re each unique!

From 1972-1992, the New England Patriots sported their vintage logo that featured a patriot in full uniform (blue coat, white pants, red hat, and red socks) getting ready to snap the ball. I would say you can use the tattoo above as a reference, but let’s just say it’s not drawn that well.

Compared to the real logo, this tattoo got the color and overall idea right, but the detail is just horrendous. And don’t even get me started on the face. I mean, that’s just straight-up bad.

Anyone who lives in the state of Mississippi is well aware of the college football rivalry between the Mississippi State Bulldogs and Ole Miss Rebels. They first played each other in 1901 and have played in the Egg Bowl 115 times with the winner taking home the Golden Egg Trophy.

Ole Miss currently leads the long-term series 64-45-6, which probably doesn’t make this fan too happy. As you can see, he doesn’t seem to be a fan of Ole Miss and would rather them go to hell.

The good news is the tattoo came out fantastic – it looks realistic, the signature is identical to his real one, and you can tell someone talented tattooed it. Other than that, it’s a horrible tattoo for many reasons.

There’s something about Patriots’ fans that will always catch you by surprise. New England has been one of the best teams in the league for the past two decades, but their fans can be quite an odd bunch – including this guy that showed off his colorful Patriots’ head tattoo in his mugshot.

Imagine getting a tattoo on your body stating that the Jacksonville Jaguars will win Super Bowl LII, just to have the Jaguars lose to the New England Patriots in the AFC Championship game. Not only that, but the Jaguars haven’t been to the playoffs since and have gone 12-37 since.

Super Bowl LII occurred at the end of the 2017 season and was played between the Patriots and Philadelphia Eagles. The Eagles upset the Patriots, despite rolling with their backup quarterback.

15. Tom Brady In All the Wrong Places

If you’re getting sick of seeing Patriots’ fans with sports tattoo fails, we apologize in advance because we have one more. This Tom Brady fan could’ve gotten this tattoo anywhere on his body, but ultimately chose to get it on the inside of his bottom lip – yeah, you heard that right.

Not only that, but there’s no creativity to the tattoo. It’s just ‘Tom Brady’ written in a teenager’s handwriting. You have to wonder how he feels about the tattoo today, over six years later.

I’ve already shared my thoughts about getting realistic tattoos of athletes, so it’s no surprise seeing this one on our list of sports tattoo fails. Don’t get me wrong, the tattoo is drawn to perfection and the shading is on-point, but is that really the tattoo you want on your arm?

I mean, do you really like Chipper Jones that much? To the point where you want his face and signature permanently drawn on your upper arm? If so, then do you, but that’s well beyond me.

13. When You Love Tony Romo Too Much

It’s okay to have a favorite athlete and there’s nothing wrong with getting a tattoo, but something makes me cringe everytime I see those two worlds collide – especially when it’s a Dallas Cowboys’ fan. At least this fan didn’t get Tony Romo’s face on his arm, but this is still bad.

First off, the font is just horrendous and you almost can’t make out the name. Secondly, the tattoo is huge and takes up the entire upper arm – obnoxious much? Either way, I don’t like it.

I’m sure there are some people out there that like the movie Kazaam, but let’s be honest with ourselves – it wasn’t that good and certainly wasn’t worthy of a tattoo. The only reason any of us even know of that movie (or saw it) is because it features the one and only Shaquille O’Neal.

Why you would want this on your body is beyond me, but to each their own. I can only hope that you have a formidable reason for getting it, but at the same time that’s highly unlikely, isn’t it?

11. An Interesting Take On the Steelers’ Logo

The Pittsburgh Steelers don’t have a hard logo to portray. It’s just three colored hypocycloids (yellow, red, and blue) and the word ‘Steelers’ inside a circle. Anyone can draw it and it’ll come out nice if you take your time. Unfortunately, the artist behind this tattoo didn’t take their time.

In fact, this tattoo butchered the Steelers’ logo and it doesn’t even look like the real logo. It has random elements that don’t make sense and doesn’t even feature any blue or red hypocycloids.

Unfortunately, this fan got this tattoo a little too early. The Indians ended up losing to the Chicago Cubs in Game 7 of the World Series – making this tattoo only 50% right. Close, but no cigar.

Speaking of premature World Series sports tattoo fails, this fan likely wishes they could have a mulligan on this decision. The New York Mets made it to the World Series in 2015 and were searching for their third championship in franchise history – something this fan would’ve loved.

Unfortunately, the New York Mets lost the World Series to the Kansas City Royals in just five games. That’s right, they only won one game in the series and now this fan has to live with his embarrassing tattoo.

We all know what a tramp stamp is and most of us have the same thought every time we see one – “Why?” It’s just such an awkward place for a tattoo and there’s nothing you can get to make it look decent. No matter what you decide to go with, it’s going to look very ridiculous.

Things are no different with this tattoo and it’s not just the location that’s weird. The entire tattoo is weird and it doesn’t quite do the Bengals’ logo justice – which is why it’s one of our sports tattoo fails.

I’m a firm believer that any tattoo on the head is a big no-no – whether it’s gang tattoos, a spider around your eye, or the Manchester United logo on your forehead. It’s the first thing everyone is going to see when they look at you. I mean, if that’s what you’re going for, then do you.

At the same time, I’m allowed to have an opinion and let’s not run away from it – this tattoo is a total cringe moment. Not only that, but he legally changed his name to Mr Man U – yikes!

Not only that, but the roster is spread out on a soccer field according to the player’s position. At least the Dutch soccer team doesn’t have to wonder if he’s a fan or not – the proof is written on his skin!

5. The NFL Fight Heard Around the World

On November 14, 2019, the Cleveland Browns hosted the Pittsburgh Steelers in a Week 11 matchup. With just 10 seconds left and the Browns up 21-7, a fight broke out between Myles Garrett and Mason Rudolph. Garrett went on to hit Rudolph in the head with his helmet.

It was a fight that caused the entire NFL to stop in their tracks and was one of the most egregious things we’ve ever witnessed in a football game. And it’s all depicted in this tattoo.

Let’s be honest, Tim Tebow never really amounted to the type of NFL quarterback we all expected out of him. He saw a little success in Denver, but that was more due to the players he had around him – not so much his performance – and it certainly wasn’t worthy of a tattoo.

All that aside, let’s not overlook how creepy this tattoo is. The half-bronco, half-human creature wearing a Broncos’ helmet just doesn’t cut it for me. And ‘Tebow Time?’ Well, that never materialized.

3. Boston Teams All in One Tattoo

The Boston Celtics, New England Patriots, and Boston Red Sox are some of the most valuable and successful franchises in their respective sports. It’s what makes the Boston area so rich and historic in the sports community and why so many fans root for these teams each year.

This person is one of those fans that root for all three and while they wanted to get a tattoo to commemorate their favorite teams, they completely missed the mark and it turned out horrible.

2. What’s So Hard About the Steelers’ Logo?

The good news is this person’s tattoo artist at least got the layout and design of the logo correct. The problem is the tattoo looks like a kindergartener drew it and likely isn’t worth what it cost.

This fan also has to explain what the tattoo is and why he got it every single time someone asks what ‘RJ’ stands for. That’s a conversation that will likely get old and annoying after a while.

Getting a tattoo is a huge step for any adult. It’s not cheap by any means, it’s permanent, and it becomes a representation of who you are. With that said, it’s very easy for things to go south when getting a tattoo and the sports tattoo fails we highlighted above are the perfect evidence.

At the end of the day, it’s your body and you’re free to do what you want with it. Just keep in mind that if you end up getting a ridiculous sports tattoo like the ones we listed above, then you very well could find yourself on our next list of the worst sports tattoo fails of all-time.