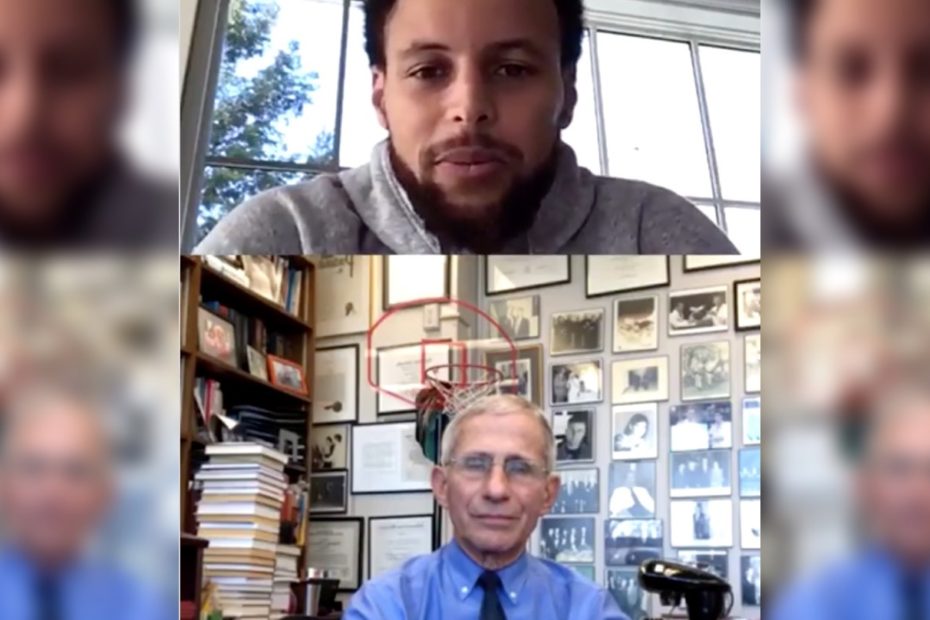 Stephen Curry Talks to Dr. Anthony Fauci About When Sports Will Be Able to Reconvene

On March 11, the NBA made the call to suspend the remainder of its 2020 season due to the health crisis COVID-19 has created. And from where the world stands right now, it’s unclear when this pandemic will come to an end and people can go about their lives as they normally would.

So in a search for at least some answers, star of the Golden State Warriors Stephen Curry had a one-on-one conversation with Dr. Anthony Fauci on Instagram Live on March 26, according to NBC Sports. And one of Curry’s first questions for Dr. Fauci was what needs to be done in order for the NBA and other sports to get back to play?

And while Fauci didn’t give an exact timeline or date of when he believes sports will be able to get back to its respective seasons, he did say this:

“What you need is to see the trajectory of the curve start to come down. We’ve seen that in China. They went up and down. They’re starting to get back to some normal life. They have to be careful they don’t re-introduce the virus back into China. But they’re on the other side of the curve. Korea is starting to do that, they’re starting to come down. Europe, particularly Italy, is in a terrible situation. They’re still going way up.”

Dr. Fauci continued saying that because the United States is such a big country, some parts of the U.S. are having a difficult time dealing with COVID-19, while other regions are doing well.

“The United States is a big country. We have so many different regions. Like New York City right now is having a terrible time, and yet there are places in the country that are really doing quite well,” Dr. Fauci continued.

“So a direct answer to your question, we can start thinking about getting back to some degree of normality when the country as a whole has turned that corner and starts coming down. Then you can pinpoint cases much more easily than getting overwhelmed by cases, which is what’s going on in New York City.”

Additionally, Curry and Fauci also talked about the similarities between the flu and COVID-19. As Dr. Fauci explained, the viruses are similar in that they are both respiratory illnesses. However, the reason COVID-19 is different from the flu is that “it’s very, very much more transmissible than the flu and more importantly it is significantly more serious.”

Fauci also talked about the idea that the virus is significantly more harmful to the elderly and those with underlying health issues like heart disease, lung disease, diabetes, and cancer. The doctor said that while the disease doesn’t affect young, healthy people as much, there are still cases of young people getting very, very ill after contracting COVID-19.

“It doesn’t mean young people like yourself should say, ‘I’m completely except from any risk of getting seriously ill.’ And that’s the reason why when we talk about being careful of physical distancing, doing the kind of social separation, it means not only for the elderly but for the young people who have to do it too.”

Fauci continued by saying that it is important for young people to socially distance themselves for two reasons, one is because they have to protect themselves because “you’re not completely exempt from serious illness.” And two, “you can become the vector or the carrier of the infection.”

You can watch Curry and Dr. Fauci’s full interview below:

According to the Centers for Disease Control and Prevention, as of March 27, the total number of COVID-19 cases in the United States is 85,356.

Nine of those cases have been players in the NBA. The first coronavirus diagnosis in the league came on March 11 when Utah Jazz center Rudy Gobert tested positive, according to NBC Sports.