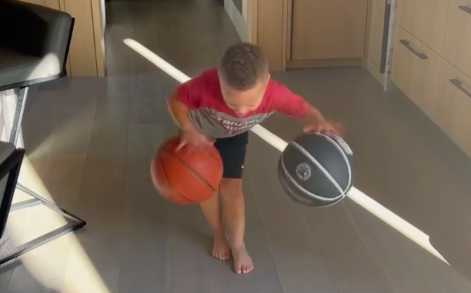 Prior to the champion bringing home the biggest win in the NBA, his wife Ayesha shared footage of their little boy mimicking Curry’s exact pre-game dribbling routine. Taking on two basketballs at once, Canon was able to speedily dribble and live up to the family name. “Canon Jack out here stuntin like his daddy,” Ayesha wrote in the caption of her Instagram post.

Although it’s clear the child has dribbling skills, his legendary father admitted that he can’t always follow the rules of the game when it comes to shooting. When sitting for an interview wth NBC Sports Bay Area, the NBA legend dropped some knowledge in regards to his son’s athletic endeavors.

“He’s got a hoop on his wall, and he’s been testing his range a little bit. And I try to give him some pointers on how to shoot, but he won’t listen,” Curry explained. “And he’ll tell me ‘No this is how I’m doing it’. We got to work on those boundaries at home for sure.”

RELATED: What is The Logan Project? Remembering Logan Preston Hale, the Carolina Panthers Super Fan Who Lost His Battle With Cancer in 2021

As the son of a former professional basketball player, 34-year-old Curry has definitely been in Canon’s shoes before. During his interview, he admitted how he and Ayesha choose to parent their children and what their household rules entail. Despite his love for basketball, Canon Jack has to prioritize school nights, even if his father is playing a game.

“It’s kind of like how I grew up watching my dad. I could never go to games unless it was the weekends because school nights were a priority. And then, sometimes you have to go to bed at halftime and you wake up asking mom how the game ended up,” Curry shared. “My kids are kind of following that same routine. I do get some cool videos from my wife and they’re at home chanting ‘Defense!’ and stuff like that. It pulls the heartstrings for sure.”

He also discussed the support his family lends to him, despite his demanding career. “My family knows, we have great boundaries,” Curry stated. “I appreciate the support and encouragement and all that, and there’s a lot of that over the course of my career, especially these last two and a half months.”