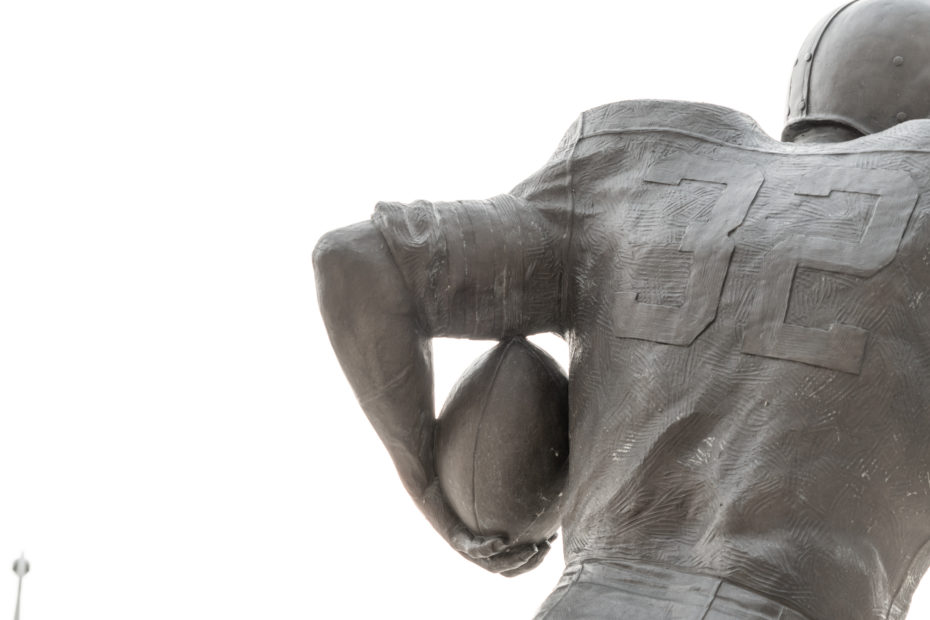 25 of the Strongest Running Back in NFL History

If you had to choose one player to be named the strongest running back in NFL history, who would you choose? Who do you think deserves that title? To be honest, there are plenty of players that come to mind, so narrowing it down to one player is more difficult than you’d think.

Most successful teams in the NFL have a running back duo that gives you a little of each — known as thunder (power) and lightning (speed). Even the strongest running back in NFL history was at their best when they had a complimentary back that helped keep the offense balanced.

Who Is the Strongest Running Back in NFL History?

In order to be named the strongest running back in NFL history, you have to be fierce and use your strength to your advantage. You must instill fear in every player you come across. You have to be difficult to tackle and can’t be scared to run through anyone who gets in your way.

The strongest running backs in NFL history aren’t always the greatest to ever play — though you will find some of the greats on this list. Since power running backs absorb a lot of contact, they’re more prone to injuries than other running backs and generally have shorter careers.

With that said, they shouldn’t be unappreciated. They should be remembered for who they were — some of the most fierce running backs of all-time. Without further ado, let’s take a look at who we believe to be the strongest running back in NFL history as we move through our top-25 list.

Maurice Jones-Drew was one of the smallest running backs in the league, but don’t let that fool you. He could run through just about anyone and never backed down from lowering his shoulder. He recorded three-straight seasons of 1,300+ yards, including 1,606 yards in 2011.

Another sleeper pick that many people might forget about, BenJarvus Green-Ellis was one of the most underrated and underappreciated power running backs of his time. He only lasted six years in the NFL, but he had over 4,000 yards from the line of scrimmage and 42 touchdowns.

Jamal Lewis was drafted fifth overall by the Baltimore Ravens in the 2000 NFL Draft. He was as consistent and reliable as they come, finishing with 1,000+ yards in seven of nine seasons. He had four seasons of more than 1,300 yards, including 2,066 yards and 14 touchdowns in 2003.

Known as ‘The Horse,’ Alan Ameche was a powerful runner and blocker back in the day. He was listed as a fullback, but put up consistent numbers that you would expect out of a running back. Despite playing just six seasons in the NFL, he amassed 4,000 yards and had 40 TDs.

It wouldn’t be right to talk about the strongest running back in NFL history without mentioning Marshawn Lynch. Tackling him was never easy and he consistently made a fool of those that tried. From 2011-2014, he finished each season with 1,200+ yards and 11+ touchdowns.

Eddie George was drafted by the Houston Oilers with the 14th overall pick in the 1996 NFL Draft. He was bigger than your average running back and showed it every snap he got. Despite only playing a total of nine seasons in the NFL, his 10,441 rushing yards ranks 28th all-time.

Jim Taylor is a Hall of Fame fullback that was drafted by the Green Bay Packers in the second round of the 1958 NFL Draft. He recorded five straight seasons of 1,000+ yards, including 2,781 rushing yards and 34 rushing touchdowns over an incredible two-year period (1961 and 1962).

Bill Brown might not have the stats that some of the other running backs on this list have, but that’s not what this list is about. He’s considered one of the strongest running back in NFL history and was nicknamed ‘Boom Boom’ due to his violent, bruising, and bulldozing run style.

Marion Motley never amassed 1,000 yards in a single season during his nine-year career, but he was one of the strongest running back in NFL history. In fact, he also played linebacker for the Cleveland Browns, which is a true testament to how strong he was on the football field.

Over his 13-year NFL career, Franco Harris recorded more than 1,000 yards in eight different seasons and more than 10 touchdowns in five of those seasons. His 12,120 rushing yards ranks 15th all-time and his 91 rushing touchdowns is tied for 11th (with Jerome Bettis) all-time.

You can’t talk about the strongest running back in NFL history without mentioning Craig Heyward. He was nicknamed ‘Ironhead’ for his vicious running style and incredible strength. His best season came in 1995 when he rushed for 1,083 yards (career high) and 6 touchdowns.

Bronko Nagurski defined what a power running back was in the 1930s. Many consider him one of the strongest NFL players of his time. He never cared to run around opposing defenders, instead choosing to run straight through them. He eventually retired to become a wrestler.

You don’t earn the nickname, ‘Nigerian Nightmare’ without instilling a bit of fear in the opposing defense. Christian Okoye used his brute strength to run through the defense and if it weren’t for several injuries that forced him to retire early, who knows what he could have accomplished.

Jim Nance spent a majority of his career with the Boston Patriots after being drafted by the team in the 19th round of the 1965 AFL Draft. In his second and third season in the league, he combined for 2,674 rushing yards and 18 rushing touchdowns, largely thanks to his strength.

As we crack the top-ten in our quest to find the strongest running back in NFL history, we arrive at Marcus Allen — one of the greatest goal-line backs ever. He was drafted 10th overall by the Los Angeles Raiders in 1982 and recorded more than 11 rushing touchdowns in six seasons.

Adrian Peterson is one of the greatest modern-day running backs and was known for his incredible strength as he bulldozed his way through any defense. He came extremely close to breaking the all-time record for most yards in a season when he rushed for 2,097 yards in 2012.

Bo Jackson was a one-of-a-kind athlete and we’ll never know just how good he could’ve been if he never suffered that hip injury in 1991. He only spent four years in the league and only amassed 2,782 yards, but he will go down as one of the strongest running back in NFL history.

When you think of Pittsburgh Steelers’ running backs, Jerome Bettis is the first name most people think of. He was a beast of a man and made opposing defenses look childish when out on the field. From 1993-2001, he finished with 1,000+ rushing yards in eight of nine seasons.

Larry Csonka is one of ten Miami Dolphins’ players in the Hall of Fame and for good reason. He was a line-smashing fullback that instilled fear in the opposing defense every time he touched the ball. He recorded three-straight seasons of 1,000+ rushing yards from 1971-1973.

With John Riggins, our list of the strongest running back in NFL history is finally down to the top five. Riggins is a player that seemed to get better as he aged. He recorded a career-high 1,347 rushing yards and 24 rushing touchdowns in his 12th season in the NFL (he was 34 years old).

Earl Campbell had an amazing start to his career — could be one of the greatest starts ever. In his first four seasons in the NFL, he rushed for 6,457 yards and 55 touchdowns. He would follow that up with 1,914 rushing yards and 14 touchdowns in 23 games over the next two seasons.

Speaking of incredible starts to their careers, Eric Dickerson easily takes the cake. For comparison, he rushed for 6,968 yards and 56 touchdowns in his first four years in the NFL. He followed that up with 4,258 rushing yards and 27 rushing touchdowns over the next 3 years.

Who’s the Strongest Running Back in NFL Right Now?

Henry is 6’3’’ and weighs 247 pounds. He makes other running backs in the NFL look like high school players and very well could have the greatest stiff arm in NFL history. He knows how to use his strength to his advantage and it’s why he’s regarded as one of the best backs right now.

YOU MAY ALSO LIKE: NFL Expansion: 25 Cities We Think the NFL Should Go Next