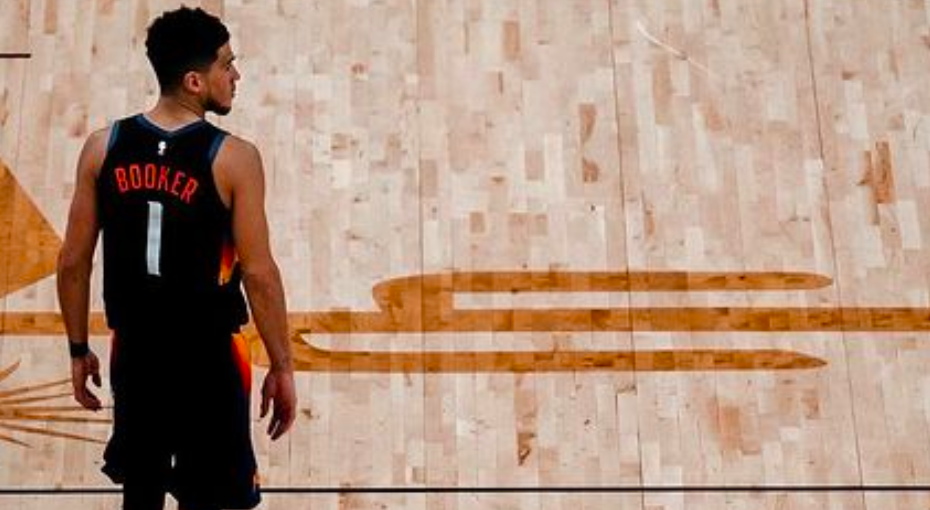 Suns Beat Lakers In First Round Of NBA Playoffs. Devin Booker Honors Kobe Bryant After 47-Point Performance: ‘I Know He Was Proud’

It should come as no surprise but the fact that the Phoenix Suns beat the Los Angeles Lakers in the first round of the playoffs did, indeed, come as a shock to many. There’s a lot to extrapolate here but first let’s address the not-surprised side.

The Suns were the second-ranked team in the West. They had the second best record. In the entire league. At 51-21 they were just one game behind the Utah Jazz (who finished with the best record in the NBA). That alone should show you this team means business. They were obviously one of the best teams this year.

RELATED: Phoenix Suns Players Shocked When They Heard Their Family Members Introducing Them Before Game

Now, to the many who were shocked side and that’s what the narrative seems to be in a lot of the sports talk side (or at least focusing on how the Lakers lost instead of how the Suns won). LA was the defending champions. They have LeBron James and Anthony Davis. Even though they were the seventh-seed and had to utilize the new play-in format to get to the playoffs, you may have just expected the purple and gold to go playoff mode and wait least get past the first round.

Speaking of first rounds, LeBron had, before this series, been undefeated in the first round of the NBA Playoffs as ESPN’s Kevin Negandhi tweeted “(f)irst time in his career a LeBron team lost the opening game in the playoffs. His teams had won 12 straight Round 1 Game 1s.”

The Suns ended up winning in six games. Granted, Davis was injured for some of these crucial games but you can’t count out the Suns’ dynamic duo in Chris Paul and Devin Booker.

This Suns team has been right there, on the brink of doing something great in the playoffs. Adding veteran players like Paul, Jae Crowder, Langston Galloway, and E’Twaun Moore has certainly helped in pushing them closer to where they want to be with savvy head coach Monty Williams at the helm. Williams has instilled a culture bent on winning and high character. With those two ingredients, you can’t lose. In this case, literally. At least in the first round of this year’s NBA playoffs against the team that won it all in the NBA bubble in 2020.

And you know Booker wanted this one bad. Just look at the stat sheet.

Booker was like, let me just put the team on my back for this one and put up 47.

Does that type of scoring sound familiar? Guess who Booker’s inspiration is on the court.

“Honestly, I was thinking about Kob and the conversations that we had kinda about what we just went through,” Booker said according to the LA Times’ Victoria Hernandez. “…the postseason and being legendary and taking the steps to get there. So seeing that 8 and that 24 up there with the way that the lighting that Staples has right here feels like it’s shining down on you. I know he was here tonight, I know he was here tonight. I know he’s in the building. I know he was proud.”