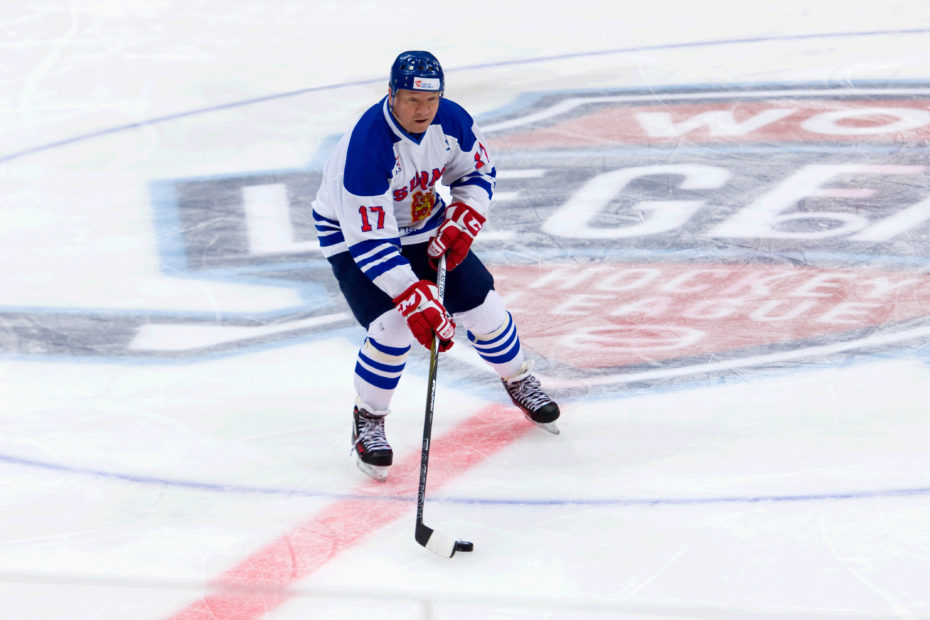 The 25 Best Hockey Players of All Time

We have calculated the 25 best hockey players of all time using the average points per game data for all hockey players (past and present) that scored more than 500 points during their hockey career. The results are below.

Here Are the 25 Best Hockey Players of All Time

Jaromir Jagr had an average score of 1.108 points per game, the 25th highest ever. He has scored a total of 1,733 points over the course of his career and is considered one of the best hockey players of all time, being the second-leading scorer. Jagr’s peak years ran from 1995-2001, and his sprawling hockey career came to a close in 2018.

Pavel Bure, once known as the “fastest Soviet invention since Sputnik”, was born in Russia and drafted into the NHL in 1989. Bure had a career score of 779 points and 702 games, and his impressive ppg average is 1.110. Known for his lightning-fast straight-ahead speed, he retired in 2003 after a long and successful career.

Gilbert Perreault, a soft-spoken leader who loved the thrill of the game, has a career score of 1,326 points and an average score of 1.113 points per game. Perreault, who played strictly for the Buffalo Sabres, was active in his career from 1970 to 1988.

Jari Kurri, a mere 20-year-old in 1980 when he started to make a legendary name for himself with the Edmonton Oilers, has participated in 1,251 games, boasts a career total of 1,398 points, and a ppg average of 1.118. Kurri remained with the Oilers through 10 seasons and 5 Stanley Cup championships, working as a key figure on the team.  In 2001, he became the first Finnish player to ever be inducted into the Hall of Fame.

Eric Lindros was known for his passion and excitement for the game; this natural joy sparked by hockey is what made Lindros so excellent at the sport. Thanks to this passion, Lindros’ stat book consists of 760 games played, 865 points scored, and a whopping average of 1.138 points scored per game.

Steve Yzerman (now the general manager of the Tampa Bay Lightning since 2010) led the Red Wings to three Stanley Cups during his career and holds the proud statistics of 1,514 games played, 1,755 points scored, and a strong per game average of 1.159 points.

Pat LaFontaine, known as a hard-working, respectable, and dependable player, totaled 865 games played, 1,013 career points, and an average of 1.171 points per game by the end of his 17-year career in 1998.

Born in Russia, Evgeni Malkin is an active player for the Penguins, and has played a total of 940 games throughout his career and has scored 1,104 points. His high points per game average of 1.174 points are what lands him the number 14 spot on this list of the best hockey players of all time.

Dale Hawerchuk, the “humble superstar” and NHL Hall of Famer passed away in 2020, but his impressive legacy lives on. With an amazing career average ppg of 1.186, 1,188 games played, and 1,409 points scored throughout his career, Hawerchuk left a lasting impression on the sport with his seamless 16-year career.

Sakic, a decorated player with a career taking place primarily in Canada, boasts two Stanley Cups, 1,378 games played, 1,61 points scored, and a career average of 1.191 points per game. Noted for his assists and ability to think as a team player, Sakic ended his 20-year career in 2009.

Lafleur was the first to score 100 points in six straight seasons and holds bragging rights to 5 Stanley Cups. He participated in 1,126 games, scored 1,353 points throughout his staggering 17-year career, and holds a jaw-dropping average of 1.202 points per game.

Phil Esposito, now a popular sports broadcaster, competed for 18 seasons in the NHL. He also served as general manager of the New York Rangers and co-founded the Tampa Bay Lightning. His sprawling athletic career began in 1961 and ended in 1981, even though he still remains active in the realm of hockey.

Kent Nilsson is a Swedish hockey player that is famous for his time on the Calgary Flames. His career was impressively long, ranging from 1971 all the way to 1998, making his one of the longest hockey careers of all time. This 27 career yielded 553 games played in the NHL and several hundred more in other international leagues. He has a career ppg of 1.41, which lands him in the number 10 spot of the best hockey players of all time.

Peter Forsberg, with one of the highest average numbers of assists per game and some of the best playoff stats in history, is known as one of the best in the league. However, he is also known for being prone to injuries due to his intense style of gameplay.

Though his body may have paid the price, Forsberg holds some of the most impressive hockey achievements in history, with a 22-year career yielding an Olympic gold medal, two Stanley Cups, 708 games played, 885 points scored, and an average of 1.250 points per game. These achievements have made him widely regarded as one of the best hockey players of all time.

Peter Stasny, the first rookie to ever score 100 points, is still an active player for the Winnipeg Jets. He has been competing since 2000 and played large sums of his career on the Avalanche and Blues. Stasny has participated in 977 games, scored 1,239 points over the course of their career, and had an average ppg of 1.268.

Sidney Crosby, another active player, has been in the game since 1999. He originally played for the Red Wings but has now been on the Pittsburgh Penguins for 16 seasons. Crosby has two Olympic gold medals, three Stanley Cups, 1,039 games played, 1,325 points scored, and a ppg of 1.275.

Crosby, born in ‘87 and drafted in ‘05, likely has several years left in his career – therefore, it’s possible that he could surpass other higher ranking players as the best hockey players of all time in the future.

Marcel Dionne, a Canadian legend and the fifth leading goal scorer in NHL history, is praised for his offensive prowess and clever maneuvers. He played 18 seasons on multiple different teams and became a hall of famer in 1992. His stats of 1,348 games played, 1,771 career points, and an average of 1.314 points per game have earned him a place with the greats, and the number 6 spot on this list of best hockey players of all time.

Bobby Orr, regularly recognized as one of the best hockey players of all time, has two Stanley Cups to his name, 657 games played, and 915 career points scored. He competed from 1962 and earned his retirement in 1979. His ppg of 1.393 earns him the number 5 spot on this list.

McDavid has been active in the league since 2011 and is still making moves today. Starting with the Marlboros, then the Otters, and now playing fiercely for the Oilers, McDavid has earned 574 career points across 407 career games, and he’s just getting started.

Revered as one of the best offensive players of the last 30 years, McDavid is also the fastest player to 100 points in 25 years. His impressive average of 1.410 points per game has earned him the number four spot on the list of the best hockey players of all time, and will no doubt be impacted in the future by career choices and successes.

Mike Bossy, the only hockey player with nine straight 50 goal seasons, played in 752 regular-season games from 1972 to 1987, scoring 1,126 points and winning four Stanley Cups. He spent most of his time with the New York Islanders, and even after his retirement from hockey, stayed heavily involved in the Canadian world of sports.

Mario Lumieuz, a Canadian who competed in 26 seasons (915 games), 10 of which he scored 100+ points in, inspired the world with his hard-hitting comeback story after overcoming a life-changing injury. He has scored a total of 1,723 points over the course of his career and holds the second-highest ppg average of any player in history with an awe-inspiring score of 1.883 points.

Wayne Gretzky, who holds the record for all-time goals, assists, points, and holds 58 other league records, is commonly idolized as the greatest athlete to ever grace the ice with his superb hockey game, he has also bagged four Stanley Cups.

His ppg is in a league of its own with an average of 1.921. He began his career with the Toronto Nationals in 1975 and ended his 24-year success streak with the New York Rangers in 1999.