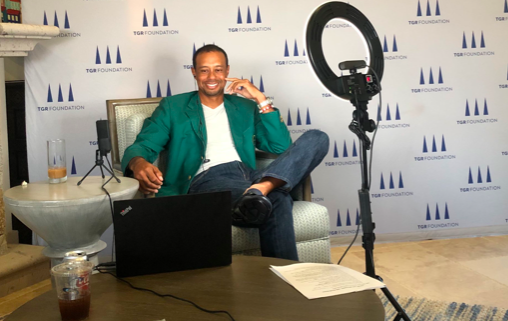 It’s finally here, golf fans! The moment you’ve all been waiting for: The Masters. Thursday marks the start of the historic American tournament as golfers tee off for round one.

And guess who’s one of the golfers teeing off who’s been competing in the tourney for a quarter-of-a-century now.

That’s right, this year marks Tiger’s 25th anniversary of competing in The Masters.

“It’s more than half my life that I have been coming to this club,” Woods told The Masters, according to a tweet. “It just gives me chills, even to this day, driving down Magnolia Lane. I didn’t really appreciate when I was 21-years-old that I’d be a part of the history of this club and this tournament. And then to have won it five times now is incredible.”

Woods talked about memories of his father, Earl Woods, in 1997, giving him a putting lesson on a Wednesday night then having the “putting week of (his) life”. Woods said his father had a heart surgery and wasn’t supposed to come that tournament but came anyways.

“The hug at 18 was an embrace of my relationship with my dad,” Woods said. “He was one who started me in the game. He was the one who got me excited about the game.”

Tiger said in 2001 he was at his “physical peak” and there wasn’t a facet in his game that he didn’t feel confident in. Driving, putting, chipping, thinking, it didn’t matter. Tiger was confident in all of that.

“Then when I got here, it was, ‘Here I go’, everything fell into place,” Woods said. “Everything just peaked. Then, to have won four straight majors in a row, it was one of , if not the greatest accomplishment in my life.”

Tiger also reflected on 2019 as he is the defending Masters champion heading into this weekend.

“In 2019 with my family and then the comeback,” Woods said. “And then come full circle as a father and have my son jump in my arms, it means so much to me.”

We will see how 2020 shakes out for Tiger. As of the publishing of this article on Thursday afternoon, Woods was at a four-under and tied for third. Tiger is very much in the running to take home another green jacket.

“I’ve been here almost half my life now…it’s been…a huge part of my life,” Woods said. “I have learned so much about my life here, so much about the game of golf.”