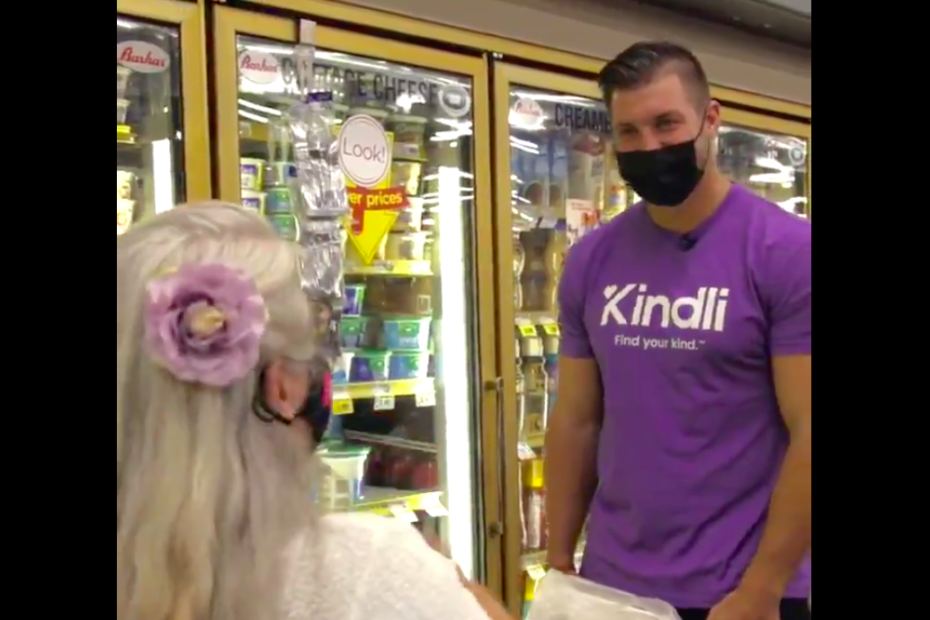 Tim Tebow is on a mission to encourage people and spread kindness to the world.

RELATED: Trevor Lawrence Takes to Twitter to Push for the 2020 College Football Season Not to Be Canceled

It’s fitting that Tebow is a part of the founding members of the Kindli app team. Tebow announced this collaboration by surprising people at a grocery store, asking if they’d like their groceries paid for.

Kindli’s goal is to generate over one-billion acts of kindness around the world. There defined as a “global movement dedicated exclusively to the promotion and celebration of kind acts worldwide”.

Add being on the breaking ground of an app to a distinguished resume that includes being a Heisman Trophy winner and former NFL quarterback. Tebow is also a three-time NY Times best-selling author, ESPN sports broadcaster, and New York Mets outfielder, and was born in the Philippines to his missionary parents.

“I couldn’t be more excited to be part of the founding team to bring Kindli to you, the first and only app that connects people through kindness!,” Tebow said in a Facebook post. “The video above is so special to me because I personally believe, and as a team Kindli believes, that kindness is contagious. It’s actually one of my favorite Bible verses – What is desirable in a man is his kindness. I think it’s so important, whenever and wherever, to be able to spread love & kindness.”

Tebow said as a team, the goal is to create an app that’s a “safe, positive social alternative with a goal of one billion acts of kindness around the world!”

“Could you imagine if there were 1,000, 10,000, one million or 10 million people that said, ‘This week or this month, I’m gonna go out there and I’m going to find someone … and I’m going to go out of my way and I’m going to do something special?’ Tebow said in the Facebook post. “Hopefully through Kindli, people will be encouraged to experience that. Join us and be sure to follow me on Kindli to see more great videos by downloading the app today from the App Store or Google Play.”

You can spread kindness, too, with the Kindli app or just by saying hello to someone today with a smile. And simply holding the door open for someone or giving them a respectful, genuine compliment can go a long way.

Along with spreading kindness around the world, could there be another little Tim Tebow on the way to spread that kindness to his next generation in his family, as well?

Tebow spoke with People in an exclusive talking about the Kindli app and told People that having children with his wife, Demi Tebow, is “absolutely” on their agenda.

“We’ve definitely talked about it, absolutely…I don’t know when that timeline would be right and when the right time (is)…but it is something we definitely talk about and really hope for one day,” Tebow told People.

As the Tebow’s spend endless sunsets and spread kindness together, we pass the kindness back and cheer them on in their hope to have a child one day.

And speaking of spreading the kindness, here’s an encouraging text from Tim to leave you with today: