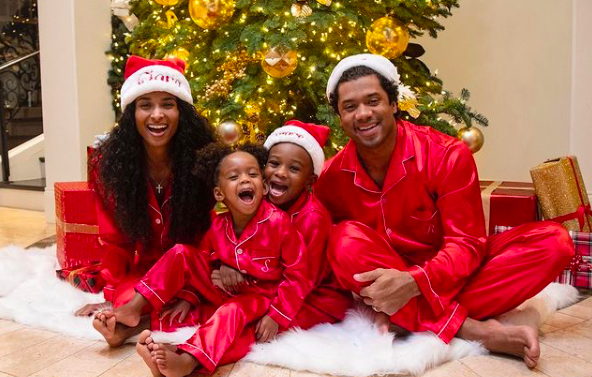 ‘Tis The Season: Gift Shopping And Caroling With Russell Wilson, Ciara, And Their Family

‘Tis The Season: Gift Shopping And Caroling With Russell Wilson, Ciara, And Their Family

It’s almost that time, you can feel it in the air! Pumpkin spice latte’s are quickly fading (although, they’re good year-round, let’s be honest) and peppermint mocha’s are now in season.

RELATED: Russell Wilson Is Using This Time With His Stepson to Turn Him Into the Next Great Quarterback

Plans are being made for Thanksgiving, a time where families, friends, and loved ones gather and reflect on counting blessings. It’ll be good to practice gratitude and keep it all in perspective on what’s important, especially during what’s been a trying year for so many.

And, of course, many families have the turkey, stuffing, gravy, cranberry sauce, and football on TV.

Seahawks quarterback Russell Wilson is focused on exactly that: football right now, along with family with the Christmas season being right around the corner as Wilson’s wife, singer Ciara, talked to People in an exclusive on the family’s plans this season.

“Right now, Russ is knee-deep in football, so during this time of year we all move around his world,” Ciara said to People. “Then when I’m doing a show, I’m always still trying to make sure that I’m factoring in his schedule. But it’s a unique time that we’re in, right? I think there is nothing greater than simply spending [the holidays] together.”

If last season’s Christmas for their family is any indication, this one will epic again.

Caroling With Russell, Ciara, And Their Family:

Preparations are already in order to make this one a Christmas to remember for their family.

“We’re about to get all the kids’ gifts in line, which is exciting and we’re actually getting ready to plan out our Christmas card, which is exciting too – we’re about to get into the spirit of it all,” Ciara said to People.. “So first football and then Christmas, but it’s just a sweet joy to be together on that actual day. For Win, it’s his first Christmas. Our eldest, Sienna and Future, they know what time it is so they’re anticipating something.”

It’s always a special time of year, a joyous festive time to celebrate and spend time with loved ones. It’s something this family embraces, as well, as you can see throughout the years they’ve been together: