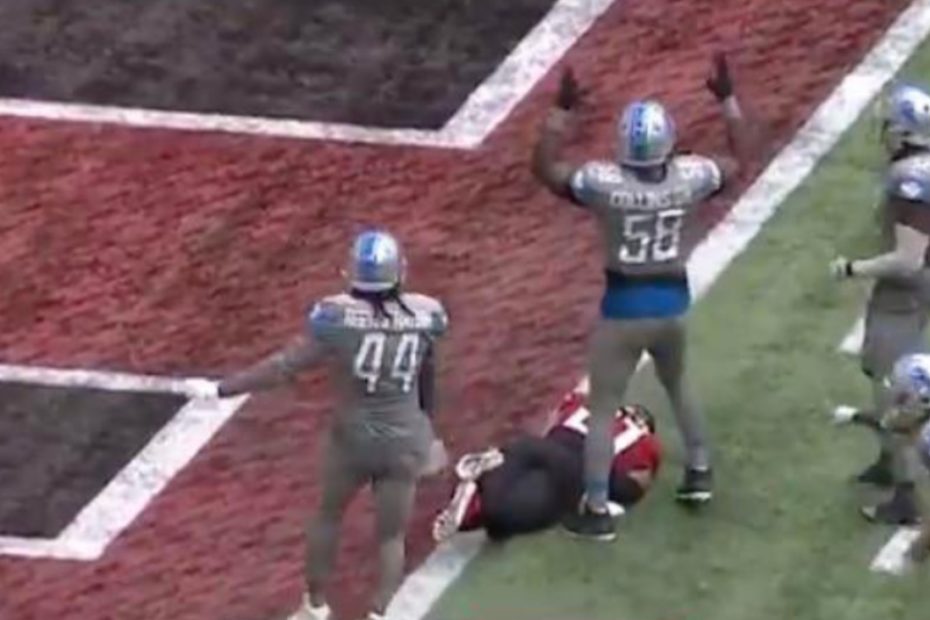 The Detroit Lions were happy the Atlanta Falcons got a touchdown with just over a minute to go in the fourth quarter to give the Falcons the lead? Yes, they were.

With no timeouts left, the Lions defense strategically wanted Falcons’ Todd Gurley to rush in for a touchdown so that the Falcons couldn’t run the clock down to set themselves up for a potential game-winning score.

So, when Todd Gurley was going full speed ahead, he went just a step too far. And as he tried to stop himself short of the end zone, he accidentally broke the plane and scored.

That Todd Gurley touchdown gave the ball back to the Lions with 1:04 left and no timeouts. I’ll just leave this right here so you can see the Lions do their thing, pulling off a 75-yard drive which ended in a touchdown to tie the game. Matt Prater would give the Lions the go-ahead point after making the 48-yard extra point.

“…Was glad to get it done for the guys. Unbelievable plays all around made by our team. Great plays on defense. Shoot, letting ’em score. I mean, I had my helmet on thinking the game was probably going to be over. They let ’em score. Gave us a chance. That’s all we needed. So, proud of those guys for making that play. Some huge plays in that two-minute drive or one-minute drive, whatever it was, and, obviously, Prater having to make the longest extra point ever, I feel like, was great, as well.”

According to the NFL UK, this was Stafford’s 30th 4th quarter comeback of his career. That puts Stafford tied at 8th all-time.

And can you guess just who he’s tied with? None other than the guy he played against on Sunday and who he also happens to be good friends with, Falcons quarterback Matt Ryan.

After setting a record for giving up double-digit leads in consecutive games, the Lions have bounced back and made a comeback of their own this season.

Stafford distributed the ball to multiple different players throughout the game, finishing with 340 passing yards, ESPN reports. And that game-winning touchdown to second-year tight end T.J. Hockenson just so happened to be on National Tight Ends Day (yes, that is a thing apparently).

The Lions are now .500 on the season, sitting at 3-3, which also means they are now in the NFC playoff hunt. If the game proved anything, it’s not to sleep on the Lions. It seems as though they just needed a bye week to get some rest and turn things around, coming together as a team.

There’s just something about when the Lions and Falcons get together, whether it’s in Detroit, Atlanta, or across the pond in London, you know it’s going to be a good game with a wild finish.