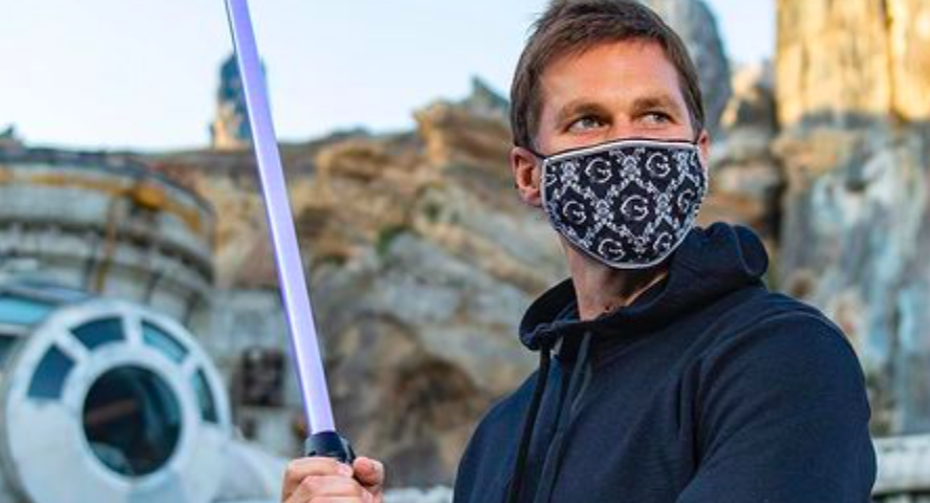 That’s one of the popular perks of winning the big game, the Super Bowl. Yeah, you get the Lombardi Trophy and cement your legacy as a Super Bowl champion in NFL history. All that’s great. But, the real celebration?

And, in particular, the Star Wars exhibits at Disney World.

In a galaxy far, far away (Orlando) is where seven-time Super Bowl champion Tom Brady and his family went.

But, it looks like Brady can’t go anywhere, even on vacation, without getting a pitch to be recruited to another team! In this case, the bad team in the galaxy.

Tom tells Disney World’s actor of the character Kylo Ren when asked about joining the ‘dark side’ per Disney Parks Blog:

“No thanks, I’m already on a winning team,” Brady said per Disney Parks Blog.

BOOM! Drop the mic, Tom. Or in this case, that lightsaber you have there.

Brady’s already got his team in the Tampa Bay Buccaneers after spending two decades with a team named the New England Patriots (which you are probably still used to seeing number-12 with them).

And his team just so happens to be returning all 22 Super Bowl starters to the team next season, which is a “a first in the NFL’s salary cap era” according to Buccaneers.com’s Carmen Vitali.

So, the quarterback’s already got a winning team. Why would he compromise his ethics and morals to join this one? That’s right, he wouldn’t. Instead, Brady and his family just had a great time at the park.

“Thank you @waltdisneyworld for showing me and my family an incredible time,” Brady said in an Instagram post. “Darth Vader told my son Benny ‘the force is strong with this one’ and now I will be spending the rest of the week convincing him that a) Jedi isn’t a real profession and b) he is not allowed on the ‘dark side’.”

And, as you can see, Brady’s also making sure his son doesn’t turn to the ‘dark side’ but stays on the good side.