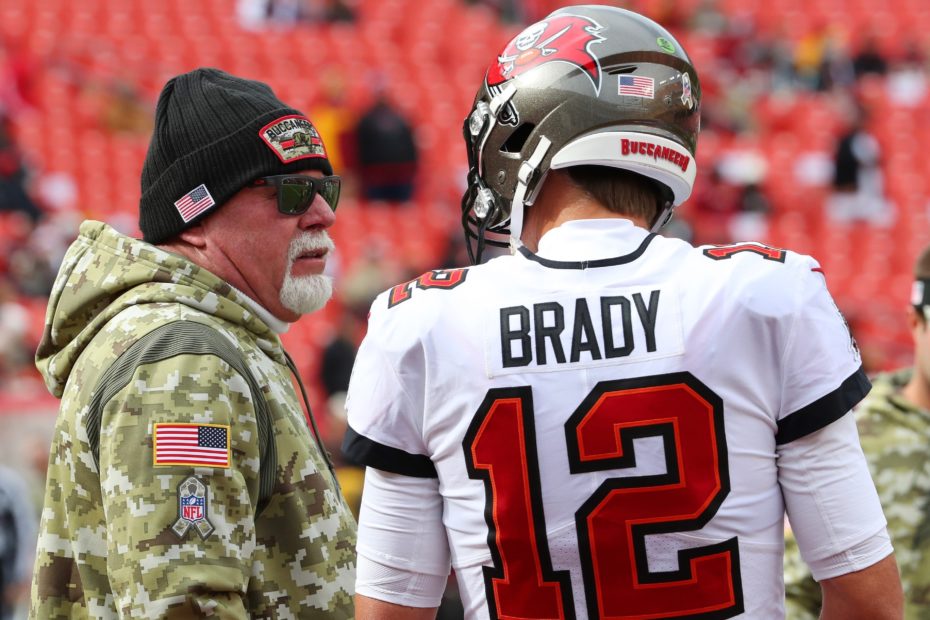 Shockingly, Tom Brady, 44, Is Older Than Every Opposing NFC Coach in Playoffs

It is no secret that Tampa Bay Buccaneers quarterback Tom Brady continues to dominate on NFL fields, despite being well into his 40s.

While his achievements at his age have been documented extensively, moments like these really put into perspective how much of a beast the 44-year-old really is. As of now, the quarterback is older than all of the NFC head coaches left in the playoffs.

Of the three other teams left, 35-year-old Sean McVay leads the Los Angeles Rams, Kyle Shanahan, 42, is head of the San Francisco 49ers, and Matt LaFleur, also 42, is responsible for the Green Bay Packers. Despite all being widely knowledgable men, Brady still holds years over their heads.

Even though he is approaching his mid-40s, the NFL star led the league in touchdowns and passing yards this season. Moreover, he has even stated that he will play into his 50s, if possible. With these stats, it is not surprising that he is largely regarded as the best quarterback of all time.

Just how respected is Tom Brady in the NFL?

Given the fact that the 44-year-old has 7 Super Bowl wins under his belt, sticks to a highly thought-out diet and exercise model, and in general proves himself to be a great guy, Brady has earned himself a well-respected position in the NFL with no signs of slowing down.

In fact, despite representing opposing teams, the Los Angeles Rams head coach failed to come up with anything bad to say about the athlete during an episode of his podcast, “Flying Coach.”

“He’s one of those guys that you want to hate on, but you can’t think of anything but, ‘Golly, he’s unbelievable,'” McVay, who was a sophomore in high school when Brady won his first Super Bowl, said.

In addition to being respected by the coaches, the 44-year-old has also deemed himself as a player who can critique a referee’s call and not be punished. On an episode of his  “Let’s Go!” podcast with Jim Gray, Brady admitted that he can often receive special treatment from officials during games.

“I do know that [the officials] probably let me get away with a lot of unsportsmanlike conducts, talking smack to the other team and talking smack to the refs when I don’t think I get the right cal,” the NFL star admitted. He even shared, “I’m kind of a pain in their ass if you don’t already know that.”