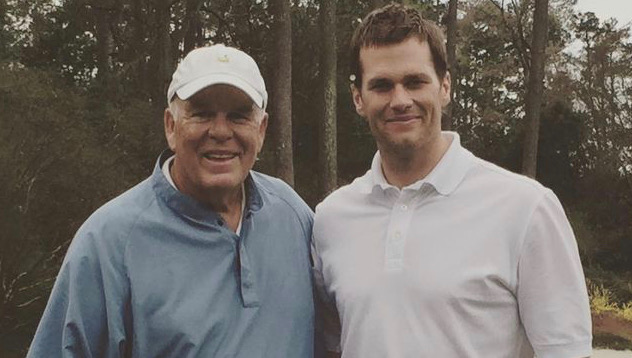 During an episode of Tom Curran’s Patriots Talk Podcast, Tom Brady’s father, Tom Brady Sr. made a surprise appearance and discussed his thoughts and feelings about his son’s switch from the New England Patriots to the Tampa Bay Buccaneers. With the NFL quarterback prepping for a game against his former team, the question was pressing.

With the amount of history Brady has tied to his former team, the game will undoubtedly be an emotional one. Winning six Super Bowls with the Patriots is a difficult thing to walk away from, but Brady’s father believed it was time for his son to walk away from the New England-based team in 2020.

“Tommy is extraordinarily appreciative of everything that happened during his New England career, and he’s more than happy that he’s moved on because it was pretty obvious that the Patriot regime felt that it was time for him to move on,” the father explained on the NBC show.

He went on to discuss that Patriots head coach Bill Belichick wanted the star quarterback off of the team, and when asked if Tom felt the same vindication, Brady Sr. responded, “Damn right.”

“Belichick wanted him out the door and last year he threw 56 touchdowns. I think that’s a pretty good year,” Brady Sr. even stated.

Tom Brady Sr. discusses the emotional side of coming back to Boston after leaving the Patriots.

Although it seemed vindictive when the Super Bowl champion split with New England, there is also a level of love and appreciation for his former team. His father discussed this and touched on the fact that it is emotional to come back to the city. “…Very nostalgic. That was our home for 20 years. The fans embraced Tommy, the city embraced Tommy and the team embraced Tommy for a while. And so, when he comes home it’s gonna be a real treat that he spent 20 years making his mark in Boston. We owe a lot to the Patriots and a lot to Boston,” he shared.

“Like every phase in life, things move on. Our kids get older, our kids move on,” he included. He went on to additionally state the sentiments, “They move out of the house, they go elsewhere. And that’s kind of what it’s like for Tommy right now where he’s moved elsewhere and wherever he is, we support our kids, and Tommy’s no different than the rest of us.”