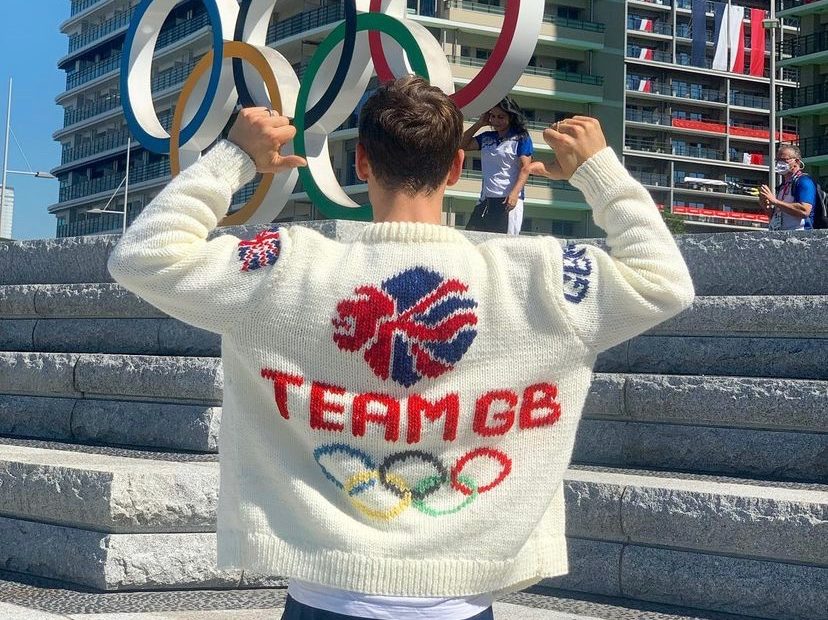 Like many people, Olympic diver Tom Daley found himself bored and in desperate need of a hobby when the COVID-19 pandemic sentenced the world to stay inside their homes. Rather than doing the standard Netflix binge-watch or learning how to bake, Daley found himself taking up knitting.

On Thursday, the 27-year-old Olympian showed off his amazing skills. Posting to Instagram, the British diver had a lot to say about his newest DIY project, which was an elaborate cardigan that has the Olympic symbol detailed in the back.

“When I got to Tokyo, I wanted to make something that would remind me of these games. Something that I could say I had made in Tokyo, during the Olympics!” he wrote to the Instagram he uses specifically for knitting and crocheting.

“So I finished the jumper and here we are,” stated Daley proudly. “This says Tokyo,” the diver said before pointing to his work. “We’ve got GBR, we’ve got Union Jack,” he included, flexing the sleeves of the project.

His knitting skills are surely impressive, but the diver himself admitted in an Instagram video that more than anything, it has been a healthy outlet for his emotions during the Olympics. Daley offered, “The one thing that has kept me sane throughout this whole process is my love for knitting and crochet and all things stitching.”

Tom Daley even knit himself a device to carry his gold medal!

The olympian performed in the men’s synchronized 10m platform competition in Tokyo, to which he brought home his first-ever gold medal. While he won bronze medals in 2012 and 2016, this was Daley’s first time winning gold and he had to think of a creative way to celebrate. What’s better than knitting your own medal holder? Nothing, apparently.

During the third round of the women’s 3m springboard final competition, the British diver was spotted cheering on other Olympians from the stands with his knitting needles in hand. One BBC commentator even noted the athlete, stating “There’s Tom Daley — he’s got his knitting needles out,” and then went on to pose the question, “What do you reckon he’s crafting there? I wonder who he’s making that purple concoction for?

Not wanting to keep the world guessing, Daley took to Instagram to explain what he was crafting during the diving competition. “This morning I made a little cozy for my medal to stop it from getting scratched. So here it is,” he explained, pointing to his creation which had the British and Japanese flag stitched into it.