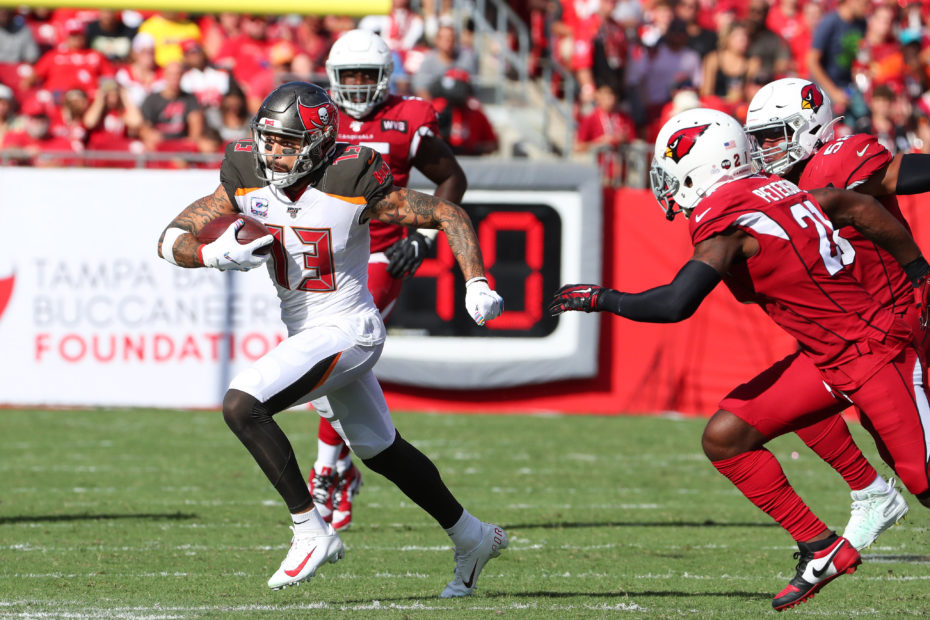 Do you remember who the top ten receivers 2016 were? It might seem like it was yesterday, but that was five years ago. And in the NFL, a lot can change in five years. Some players get better, other players get worse. They might retire, get injured, change roles, or change teams.

The NFL is a ‘what have you done for me lately’ kind of league — much like any other pro sport. With the number of players that come and go on a yearly basis, the stars we see today might not be the stars we see tomorrow. You truly never know what you’re going to get in the NFL.

One thing’s for certain — the true superstars of this league are able to make a difference on the field year-in and year-out. They’re sustainable, reliable, and committed to being the best player possible. One good year isn’t enough for them. Instead, they want to do it over and over again.

RELATED: 25 of the Worst NFL Players to Ever Suit Up

For those of you that just started following the NFL, you might not recognize all of the top ten receivers 2016. Then again, you’ll likely recognize most of them because eight of them are still prominent today — only two of them have retired since putting up good numbers in 2016.

Before we get started, it’s important to note that we are basing the top ten receivers 2016 on receptions, receiving yards, and receiving touchdowns. We aren’t taking into account rushing stats or return stats. We’re only interested in how they played as a receiver back in 2016.

As we rumble our way through this list of top ten receivers 2016, we’ll display their stats both in 2016 and 2020 (last year). We’ll also discuss where they’re playing in 2021 and how they got there. It might surprise you that only three of these players have yet to change teams or retire.

With that said, let’s hop to it!

Amari Cooper was drafted 4th overall in the 2015 NFL Draft by the Oakland Raiders, so expectations were high for him coming into the league. 2016 was his second year in the league and he continued to impress the Raiders’ staff with 83 catches, 1,153 yards, and 5 touchdowns.

At the time, his receptions and yards were both career highs for him. His 1,153 yards ranked 8th in the NFL. To be fair, we could’ve easily inserted his teammate, Michael Crabtree, into this spot — considering Crabtree put up 89 catches, 1,003 receiving yards, and 8 receiving touchdowns.

Cooper had a mediocre 2017 season and was eventually traded to the Dallas Cowboys midway through the 2018 season. Despite failing to amass 1,000 yards in 2017, he has done so every year since (including career bests in yards and touchdowns in 2019, and receptions in 2020).

Doug Baldwin entered the league as an undrafted free agent in 2011. The Seattle Seahawks saw potential in him and they certainly don’t regret their decision to give him a shot in the NFL. In fact, he played a big role in the team’s Super Bowl victory against the Denver Broncos in 2013.

Brandin Cooks was drafted by the New Orleans Saints with the 20th overall pick in the 2014 NFL Draft. He had a decent rookie season, but exploded on the scene in 2015 with 84 catches, 1,138 yards, and 9 touchdowns. He would put up similar numbers in his sophomore season.

Although 2016 saw a small dip in both receptions and touchdowns, a large reason was due to the addition of Michael Thomas (who we’ll discuss next). Still, his 78 receptions, 1,173 yards, and 8 touchdowns in 2016 were impressive — including his 98-yard touchdown pass in Week 1.

Brandin Cooks was traded to the New England Patriots in 2017, traded to the Los Angeles Rams in 2018, and traded to the Houston Texans in 2020. He has posted more than 1,000 yards with each team, showing that he can be a receiving threat no matter who his quarterback is.

It might be surprising to see two teammates listed as top ten receivers in 2016, but that’s the case with Brandin Cooks and Michael Thomas. The reason we have Thomas listed one spot higher is because he had more receptions and touchdowns — and he was a rookie in 2016.

The Saints selected Thomas in the second round of the 2016 NFL Draft and he made an impact immediately. His 92 receptions, 1,137 yards, and 9 touchdowns were unheard of for a rookie. His receptions and yards ranked 9th in the league, while his touchdowns ranked 6th in the NFL.

Thomas only got better from that point forward. He improved his stats every year for the next three years, eventually totaling 149 receptions (NFL record), 1,725 yards, and 9 touchdowns in 2019. An injury in 2020 sidelined him for most of the season and the start of the 2021 season.

T.Y. Hilton was drafted by the Indianapolis Colts in the third round of the 2012 NFL Draft. He made an immediate impact on the team and became one of Andrew Luck’s favorite receivers. In fact, he has amassed 1,000 yards in five (almost six) of his eight seasons with the team.

In 2016, he took things to another level. He finished with 91 receptions, 1,448 yards, and 6 touchdowns. He not only led the league in yards, but also ranked 10th in receptions — both numbers being career bests to this day. It was his fourth-straight year over 1,000 yards.

Julio Jones was drafted by the Atlanta Falcons with the sixth overall pick in 2011. He finished his rookie year with 959 yards and 8 touchdowns, despite playing 13 games. He followed that up with 1,198 yards and 10 touchdowns in 2012 before injuries derailed most of his 2013 season.

In the three years following that 2016 season, he was just as good with 300 catches, 4,515 yards, and 17 touchdowns. He was haunted by injuries during the 2020 season and was eventually traded to the Tennessee Titans prior to the 2021 season after a rift with the Falcons.

No one expected Antonio Brown to burst onto the scene when he was drafted by the Pittsburgh Steelers in the sixth round of the 2010 NFL Draft. Though he didn’t see much action his rookie year, he showed up in a major way his sophomore season and never looked back.

Over the next two years, Brown stayed hot with 205 catches, 2,830 yards, and 24 touchdowns. Unfortunately, his ego got in the way and he was eventually traded to the Raiders and Patriots, where he continued to hurt his legacy. He’s now making a comeback with the Buccaneers.

Jordy Nelson was drafted by the Green Bay Packers in the second round of the 2008 NFL Draft. He played in a limited role until 2011, when he quickly became Aaron Rodgers’ favorite target. Over the next four years, he totaled 300 catches, 4,841 yards, and 43 touchdowns.

The following two seasons saw Nelson slowly decline. He finished with 482 yards and 6 touchdowns with Green Bay in 2017 and was released that offseason. He played one year with the Raiders (739 yards and 3 touchdowns), but was cut the following year. He retired in 2019.

Odell Beckham Jr. had high expectations when he was drafted 12th overall by the New York Giants in 2014. He lived up to those expectations, recording 187 catches, 2,755 yards, and 25 touchdowns in his first two seasons in the NFL. He was a threat every play he was on the field.

That didn’t stop in 2016, when he finished with 101 receptions, 1,367 yards, and 10 touchdowns. He ranked third in the league in receptions and yards, and fifth in touchdowns. It was his first season above 100 catches and third-straight season with 1,300+ yards and 10+ touchdowns.

Injuries derailed most of his 2017 campaign and character flaws overshadowed his final season with the Giants — despite totaling 77 catches, 1,052 yards, and 6 touchdowns. He was traded to the Browns ahead of the 2020 season, but injuries have haunted him ever since the trade.

Mike Evans was drafted by the Tampa Bay Buccaneers with the seventh overall pick in the 2014 NFL Draft — five spots ahead of Odell Beckham Jr. He has been one of the most consistent receivers in the league since then, amassing 1,000 yards every single year.

2016 was a prominent season for Mike Evans, finishing with 96 receptions, 1,321 yards, and 12 touchdowns — all career highs at that point. He ranked sixth in the league in receptions, fourth in yards, and second in touchdowns. His 96 receptions remains a career best to this day.

Over the next four years, Evans continued to exert his dominance. He barely misses games, has never caught less than 1,000 yards in a season, and recently won a Super Bowl with Tom Brady at quarterback. If Tampa Bay is smart, Evans won’t be going anywhere anytime soon.

Will Their Legacies Continue?

With the 2021 season underway, most of these players are still trucking along. With that said, a majority of them likely won’t find themselves in the top ten this season. Injuries, role changes, slight declines in targets, and a new wave of talented receivers are mostly to blame for this.

YOU MAY ALSO LIKE: 25 of the Fastest NFL Players Ever

As the 2021 season continues, we’ll see if some of the top ten receivers 2016 can play like they did five years ago or if some of the other guys will take their place.