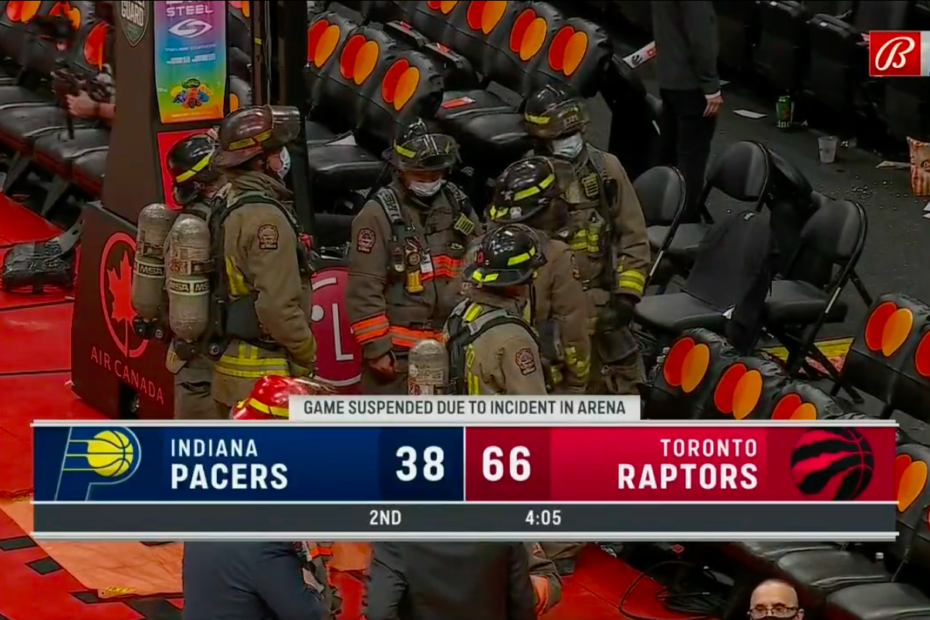 The Indiana Pacers went head to head against the Toronto Raptors Saturday night at Toronto’s Scotiabank Arena. The game was suspended following a fire emerging from the arena, resulting in an immediate evacuation of fans.

A small electrical fire in a hanging speaker was spotted in Section 103 of Scotiabank Arena, which officials shared didn’t pose any threat to public safety. However, members of the fire department were concerned the speaker might collapse and cause injury to fans attending the game. After the game was temporarily stopped, fans and players evacuated the stands and court.

“Under the direction of Toronto Fire Services, and out of an abundance of caution, fans were evacuated from the building while the incident was managed,” Raptors and Maple Leaf Sports & Entertainment shared in a statement, according to CNN.

At the time, public service representative Herbie Kuhn broke the news to audience members. “By order of the Fire Chief, we are being asked to slowly and calmly evacuate the building,” he announced, to which he was booed by a sea of fans. “There is no threat to public safety. … The game has been suspended.”

The game was paused with 4:05 remaining in the second quarter while the Pacers were losing 38-66. Although some may joke that the team planned the fire in order to buy more time to secure a comeback, Toronto Fire Services reported that the fire was the cause of electrical engineering difficulties. There were no injuries reported and the game resumed 40 minutes after the evacuation. After the fire was put out, fans did not return to the stands.

The team relayed that “​​tickets will be refunded within 30 days,” for fans that were evacuated. They also included the sentiments, “We apologize to all of our fans who made it out to the game tonight and we thank our fans for their continued support.”

In addition, the NBA team gave their thanks to the fire department that entered the building and safely handled the issue at hand.

“MLSE and the Toronto Raptors thank Toronto Fire Services and Toronto Police Services for their assistance and thank all fans for their patience and orderly evacuation,” the Canadian team said following the incident.

The Raptors still took home the victory with a final score of 131-91.