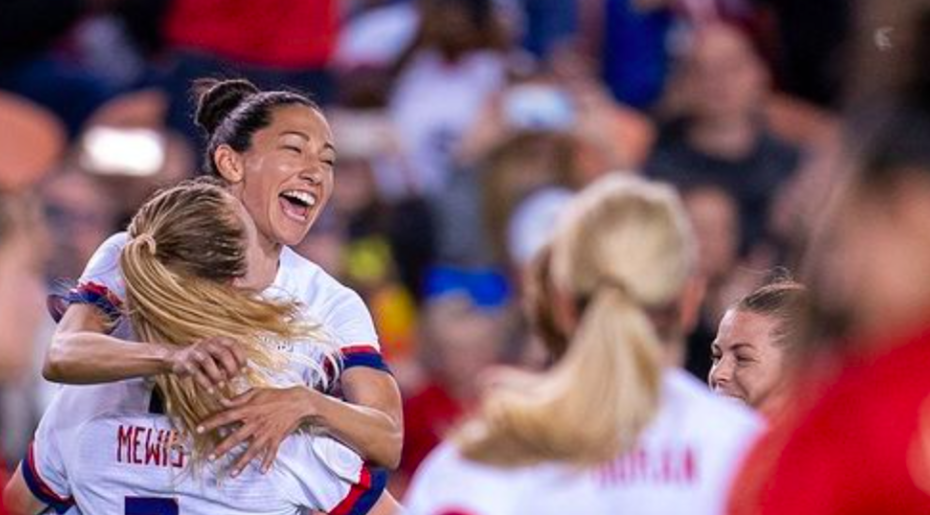 The US Women’s National Team (USWNT) dominates on the soccer pitch. And ahead of the 2020 (now 2021) Tokyo Olympics, they’ll be looking to secure yet another gold medal.

Goal lists the team’s accolades: “The U.S. women’s national team are known for their World Cup successes – winning their fourth trophy in 2019 in France – but they have been formidable on the Olympic stage as well. The USWNT has won four Olympic gold medals. They first won gold in in 1996, the year of the inaugural Olympic women’s soccer tournament.”

RELATED: “We Will Not Stop Until We Have Gotten What We Rightfully Deserve”: USWNT’s Crystal Dunn On Equal Pay For Women

Yet what seems to also be dominating headlines when it comes to the USWNT is what’s happening off-the-pitch.

It’s what the team’s asking for. It’s what so many more people are asking for outside of the sport, as well.

Those headlines have been well-documented over the past few years and now a new documentary is being released on HBO Now to highlight the team’s fight for equal pay.

The documentary is, according to HBO Now, an “inside account of the U.S. women’s national soccer team’s ongoing fight for equal pay.

The issue obviously is one that delves into a lot of layers. There’s just so much history where pay has slanted more towards one gender over another. So, there’s a lot to unpack here. But when it comes to the USWNT’s fight towards having the same pay as the men’s US National team’s players, ESPN described in June 2020 specifically what the “USWNT lawsuit versus U.S. Soccer” is.

The team, according to ESPN, filed “a gender-discrimination lawsuit against the U.S. Soccer Federation on March 8, 2019…The 28 players who are part of the suit allege that the USSF engages in ‘institutionalized gender discrimination’ toward the team. The discrimination ‘has caused, contributed to, and perpetuated gender-based pay disparities’ against the players in ‘nearly every aspect of their employment,’ the lawsuit reads. The lawsuit was filed in U.S. District Court for the Central District of California under the Equal Pay Act and Title VII of the Civil Rights Act.”

ESPN then stated that “(i)n July 2019, USSF president Carlos Cordeiro released an open letter, citing what he described as extensive analysis of 10 years of financial data. He said the data showed that from 2010 to 2018, the women’s players were paid $34.1 million in salary and game bonuses by U.S. Soccer, compared to $26.4 million given to the men during the same time period. The men’s and women’s teams operate with separate collective bargaining agreements and pay structures. Representatives for the USWNT said the claim by USSF was ‘utterly false.'”

Since all that, obviously more has happened and more recently one of the latest updates from this issue is that, according to The New York Times’ Andrew Das in April 2021, “(a) judge approved a settlement between U.S. Soccer and its women’s team in their dispute over working conditions, allowing the players to resume their legal battle over compensation.”

Das also notes that “(w)hile the women won significant gains in their current agreement, the largest gap in compensation between men’s and women’s players remains the World Cup bonuses paid by FIFA, world soccer’s governing body. The bonus pool at the last men’s World Cup was $400 million, compared with $30 million for the women’s event a year later.”

The New York Times mentioned what “the federation said in a statement”: “We expected the women’s national team to appeal the summary judgment ruling that determined U.S. Soccer has paid the USWNT fair and equitable compensation. We remain hopeful that we can come to a resolution outside of the court system.”

The whole issue will take center stage and make headlines again soon as the documentary is set to be released on June 24 per HBO Max.