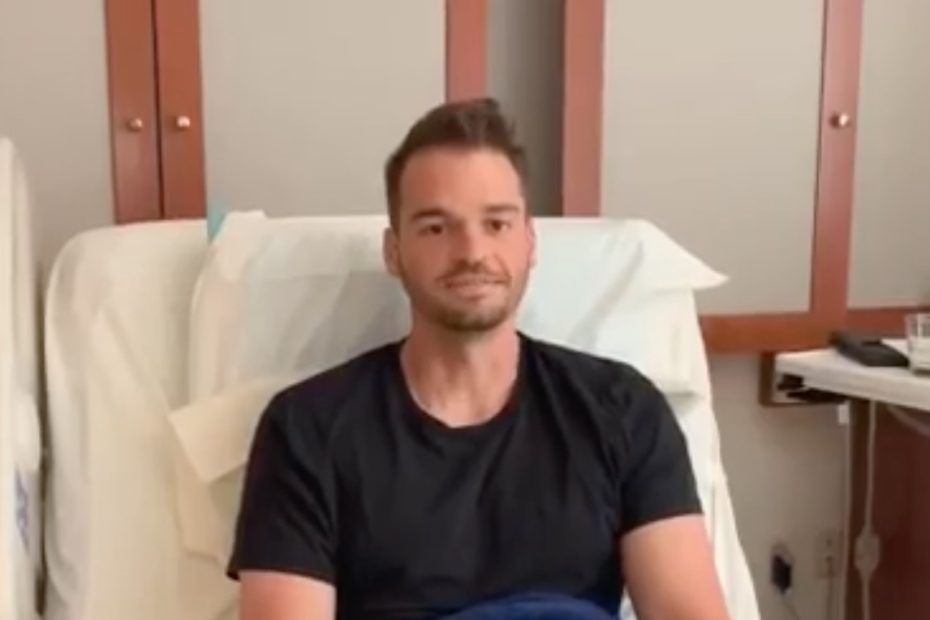 Baltimore Orioles outfielder Trey Mancini was diagnosed with stage 3 colon cancer this year, but he still considers himself “so lucky.” In an essay penned for The Players’ Tribune, Mancini opened up about the days before, during, and after receiving his diagnosis.

“I’ve always loved spring training,” Mancini began. “It’s one of my favorite times of year. It just has a slower pace, a softer edge. It’s friendly. And it’s all about baseball — and I love baseball.”

But this year, Mancini admitted it felt different. The motivation and the excitement he usually had when spring training was about to start wasn’t there.

“…This year it was a little bit tougher, more of a grind to get through every day,” he wrote. “I’ve been to spring training with the Orioles in Sarasota every year since 2014, but I’d never felt like that before. I’d take BP, and I’d just get tired after a few swings. So I knew something was up, but I chalked it up to just getting older.”

At the time, the athlete admitted, there wasn’t “even one second” that he suspected “anything was seriously wrong.” Just before training began, Mancini went through the usual physical, which included blood work.

RELATED: Husband and Wife Baseball Players Hit Homeruns Off Each Other in Loving Battle

Team doctors alerted Mancini that his iron levels were reading low and that they would need him to come in for a second blood test. As the baseball player admitted, he had come down with the flu the day of his physical, so he thought, maybe that had somehow affected his iron levels.

But the second test revealed that Mancini’s iron levels had continued to drop.

“The doctors thought that I probably had either celiac disease or a stomach ulcer. Colon cancer was a remote possibility, but it was my last concern. I was only 27. No way I had that. My dad had had Stage II colon cancer in 2011, but he was 58 then. We just thought I was way too young for me to have it.”

Soon after, Mancini went in for an endoscopy and a colonoscopy to confirm doctors’ suspicion that he had celiac disease. As he began to wake up from the anesthesia, he found his girlfriend, Sara, sitting next to his bed holding his hand. Then his doctor began explaining what they found.

“And then he said it: They had found a malignant tumor in my colon. My dad’s an ob-gyn. I’m familiar with the way doctors talk. I knew immediately that this was real.”

As Mancini continued, Sara took it from there. She made sure he had all of his loved ones surrounding him at that moment and he was incredibly thankful for that. But as he admitted, that didn’t change how tough and shocking it was to receive such news.

“I was young. I was coming off the best year of my career. And I’d just reached the point that I’d been working toward my whole life — in January I’d signed a new contract,” Mancini continued. “The Orioles drafted me in the eighth round in 2013, so I didn’t get a whopping signing bonus. After four years of minor league salaries, and three years of making close to the major league minimum, my new contract was a big moment for me, a milestone. But just as important as the money was the fact that I was still an Oriole, that I was going to be staying with the only team I’ve ever played for.”

And if it wasn’t for the Orioles, and for that second blood test, he would have never caught the colon cancer as early as he did. And that’s why, despite being diagnosed with stage III cancer, undergoing surgery to have the tumor removed in March, and starting chemotherapy on April 13, he still says “I am so lucky.”

Mancini was really looking forward this upcoming season, “but to have something like cancer,” while the world is also concerned with COVID-19, “suddenly just completely dominating every other thought that was going through my head was something I never thought I’d ever experience.”

“My treatment will take six months — every two weeks for six months. If baseball returns in 2020, it will probably be without me.”

And although Mancini admits he does have days when he questions why this is happening to him, he still knows how blessed he truly is. And because of that, he’s already looking forward to spring training 2020.