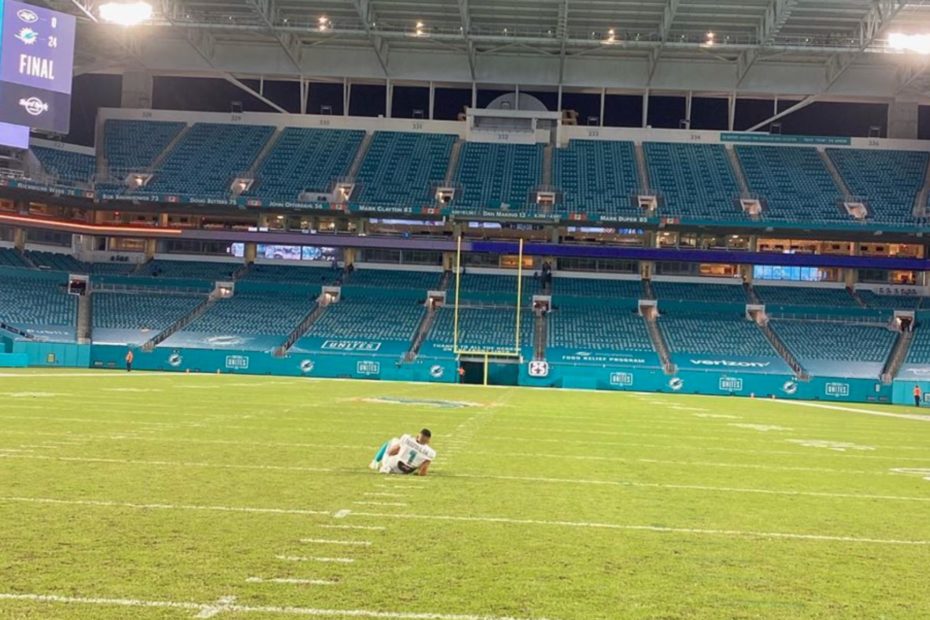 Tua Tagovailoa Makes NFL Debut: ‘Most Guys Don’t Have To Go Through What Tua Went Through’

Tua Tagovailoa Makes NFL Debut: ‘Most Guys Don’t Have To Go Through What Tua Went Through’

Tua Tagovailoa stepped onto the national stage, coming off the bench during a college football National Championship, throwing 3 touchdowns and leading Alabama to a comeback win in overtime in 2017. In 2018, Tua was a Heisman Trophy nominee as Alabama’s quarterback after throwing for nearly 4,000 yards, 43 touchdowns, and only 6 interceptions. That year, he had a passing efficiency rating of 199.4.

However, while having another terrific season in 2019, his final year with Alabama was cut short when he suffered a major hip injury, Forbes reports. Nonetheless, in 2020, Tua was drafted by the Miami Dolphins and for the first time ever, he stepped onto an NFL field, making his professional football debut on Sunday evening against the Jets.

There may have been only two minutes, and 27 seconds left in the game, but the fans, his team, even starting quarterback Ryan Fitzpatrick was excited for the young quarterback. And that support is something Tua admitted he is very grateful for.

“To just be out there with my teammates, being my first time, and getting the support and love from them, I think that was super awesome. And then you have a 16-year vet like Fitz who has no animosity towards it, as well, who’s just been supportive the entire time. Good drive, bad drive, he comes to the sidelines and just talks through his process on why he did some things. I’m very fortunate to have a mentor like him who is just very encouraging on the field and then, this guy’s just very personable off the field, as well.”

After the game, Tua—who had suffered the hip injury just a year ago—went back onto the field on his own and reflected on what’s been an incredible journey. Tagovailoa opened up about the game during a virtual press conference:

“I think it was a very special moment for me because my parents weren’t here. I couldn’t really remember where we ended our drive at so I tried to sit close to where we ended our drive…and I ended up FaceTiming my parents because they couldn’t be here. That’s usually how it goes. I usually talk to my parents after the game. My parents usually never miss my game…They were happy to see me out there and playing again especially with what happened last year prior to the injury.”

The Monday after Tua’s first NFL snap, his former head coach at Alabama, Nick Saban, spoke highly of him at his own press conference. “Most guys don’t have to go through what Tua went through, in terms of the adversity that he had to overcome from an injury standpoint with the hip injury. But he worked hard, he’s back to 100%.”

“I’m glad to see that he’s getting some opportunity to play now, and I hope that that continues, and I hope he does very well. We haven’t had anybody in this program since I’ve been here that’s been a better ambassador for the university, a better ambassador for the program than Tua has been. So, our thoughts and prayers are always with him and we hope that he does extremely well. And it surely won’t surprise me if that’s the case.”

After his big moment, Tua shared a photo of himself on the field on Instagram, writing, “Come a long way. The journey continues,” before adding the hashtag, “Blessed.”