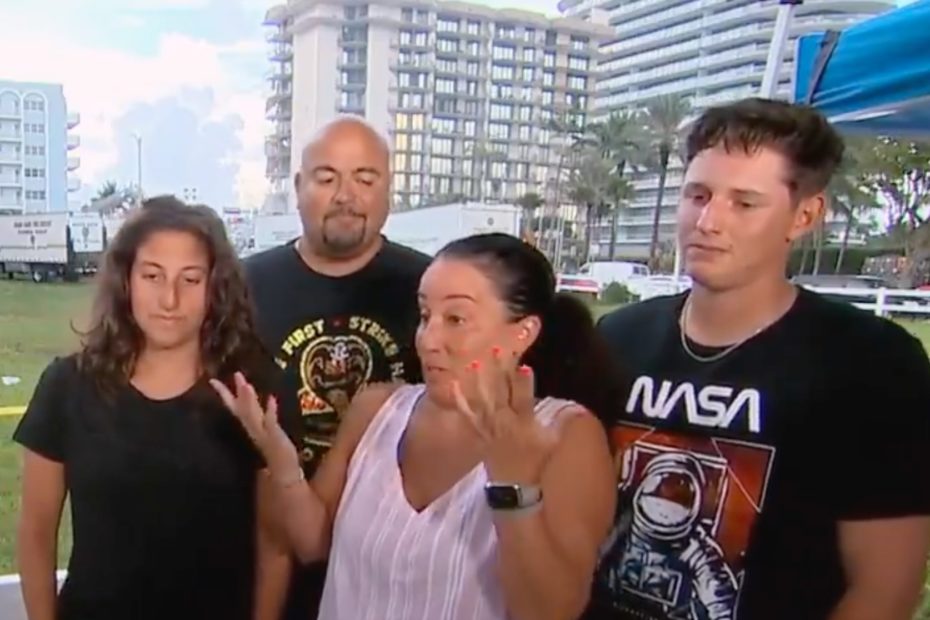 On a family vacation visiting his grandparents in Florida, University of Connecticut baseball player Justin Willis was watching T.V. with his sister on the early morning of June 23rd, 2021. Staying in his grandparents’ 11th-floor condo at the Champlain Towers South, the Willis children were awake as the building began its partial collapse.

Searching for an escape route, the pitcher searched down a hallway that only displayed half of a neighbor’s door, the rest of the neighbor’s apartment that had been severed and worn, and a beacon of hope: the Atlantic Ocean. Albert and Janette Aguero, parents of Justin, were abruptly awoken from their sleep as they heard enormous booms erupting from their surrounding area.

Searching for answers, they looked out their window to see firefighters had arrived at the scene and were pleading for them to escape the building. Grabbing only the essentials, the family began their treacherous escape route.

On their way out, the family climbed downstairs that had not been blocked and found a garage-level hole that wasn’t previously there. Unfamiliar with the building as they were not residents, they had no idea that this giant hole was not a part of the building. Albert Aguero stated, “It was literally the only way out,” according to ESPN.

However, on their way out, the family found an 88-year-old woman that was also searching for a way out. About to give up, Esther Gorfinkel was found by the Aguero-Willis family. Going down floor by floor, the family was escorting others that were in search of an exit in the pitch-black stairwell. On the third floor, Gorfinkel was found with just a nightgown and her flashlight.

“When I was trying to even look for an exit door, I went to my left because it was along there … an exit door there to go in the steps,” recalled the woman after the traumatic event. “I saw destruction. Then I could see a little bit of the sky. And then I know something wrong happened. And I went to the right, and I opened [that] door and I went to [those] stairs.”

Gorfinkel was waiting with another family and a woman who was holding her hand for comfort. However, the woman was not sure she would be able to give the 88-year-old the proper opportunity for safety, as Gorfinkel was becoming tired and the woman was unable to carry her. When Willis and his family arrived, the woman asked if they could take her. Without hesitation, Willis and his father took hold of her by both of her arms.

When Albert told the story, he remembered what she said to the family, “At that point, she was like, ‘I’ve lived a good life. You guys can go,'” he said. Yet, he insisted that she would make it to see her 89th birthday.

ESPN reported, “They guided her down to a basement-level garage, where water touched their calves. There was, they remembered, nowhere to go. The ramp that headed out to the street had been destroyed. But they noticed a hole in the structure, likely opened by the shifting building, that they could escape through if they could scale three feet of concrete with Gorfinkel in tow.”

Emerging from the rubble and hoisting Gorfinkel through the crevice that offered an escape, the family eventually made it to the outside world. However, they feared that the rest of the building would soon give out.

Spotting sand and a nearby grass patch, the group headed for picnic tables that were far enough away from the building to avoid a possible injury from a collapse. Gorfinkel told them that she needed to sit down or else she would have a heart attack. Upon finally reaching a safe haven and a place to rest, the crowd watched in horror as the event of mass destruction, which left 98 people dead, unraveled before them.

Gorfinkel thanks Willis and his family for saving her life.

In the aftermath of the disastrous collapse, Willis and this family went home to New Jersey, likely only focusing on the shocking gravity of the situation. Once Gorfinkel was checked on by medical professionals, a relative was called to pick her up. Individually spending time to process the trauma, the entire group was thankful to be alive.

UConn’s administration reached out to their player with support and counseling opportunities. UConn baseball coach Jim Pender also reached out individually to Willis and offered his elation for the 22-year-old to have made it out safe. Willis said, “It has put life into a different perspective for me.”

However, Gorfinkel and Willis’s relationship did not end that scary night. After arranging a phone call with her son, Gorfinkel phoned the family and shared with tears in her eyes, “There are no words that can express whatever you feel when a person helps to save your life…I also think I would … give a thank-you in person.”