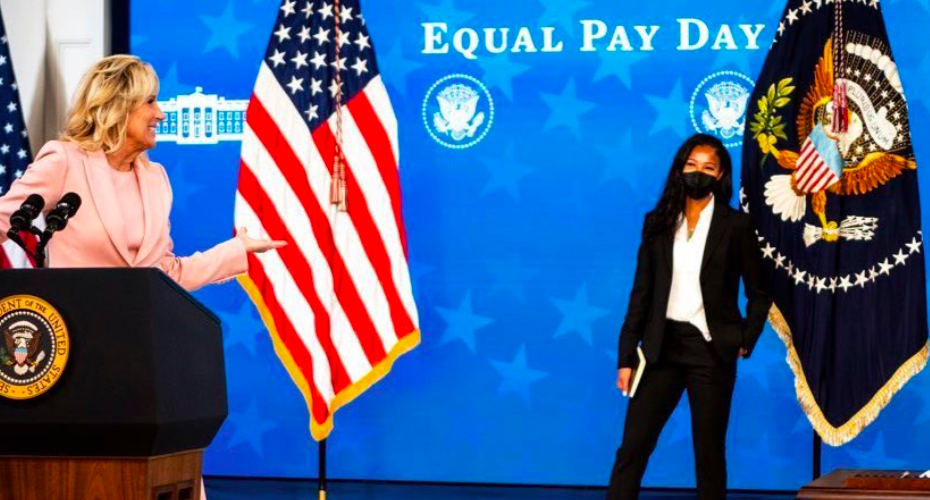 The US Women’s National Team (USWNT) has been fighting for gold medals and championships on the pitch. Off-the-field, they’re pitching politicians to support equal pay for women.

And, in particular, to be able to get paid fairly and equally as their male counterparts doing the same exact job as them, playing soccer (of course known around the world as fútbol).

Recently, two of the USWNT players were able to go to Washington D.C. to talk more about this.

RELATED: “We Will Not Stop Until We Have Gotten What We Rightfully Deserve”: USWNT’s Crystal Dunn On Equal Pay For Women

According to People: “Megan Rapinoe, Margaret ‘Midge’ Purce, and the U.S. Women’s National Soccer Team…brought the team’s concerns to the President Joe Biden and First Lady Jill Biden at the White House in honor of Equal Pay Day Wednesday (March 24). Earlier in the day, Rapinoe testified before the House Committee on Oversight and Reform. As 25 other members of the team appeared behind her on a video screen, Rapinoe delivered a…speech about their years-long fight for equal pay both within U.S. Soccer and across the world — including their March 2019 class-action lawsuit against the U.S. Soccer Federation”.

The event would be in honor of National Equal Pay Day.

March 24 was this year’s National Equal Pay Day, which “symbolizes how far into the year women must work to earn what men earned in the previous year” according to the National Committee on Pay Equity.

The national day has been on different dates throughout the years. This year, President Biden, with his wife, First Lady Jill Biden, Rapinoe, Purce, and the USWNT (virtual), in attendance, would “(sign) a proclamation naming March 24 as National Equal Pay Day” according to The Washington Post .

According to The Guardian, that committee Rapnioe spoke at “examin(es) ‘the economic harm caused by longstanding gender inequalities, particularly for women of color.’ In her opening statement, the soccer star told the committee that: ‘I am here today because I know firsthand that this is true. We are told in this country that if you just work hard and continue to achieve – you will be rewarded, fairly. It’s the promise of the American dream. But that promise has not been for everyone.'”

“The United States women’s national team has won four World Cup championships and four Olympic gold medals on behalf of our country,” Rapinoe went on to say as transcribed by The Guardian. “We have filled stadiums, broken viewing records, and sold out jerseys, all popular metrics by which we are judged. Yet despite all of this, we are still paid less than men – for each trophy, of which there are many, each win, each tie, each time we play. Less.”

Here’s an explanation regarding this US professional soccer gender pay gap:

According to the National Women’s Law Center: “Women working full-time, year-round are typically paid just 82 cents for every dollar paid to men…A gender wage gap exists in 94 percent of occupations. Women, and women of color are overrepresented in front-line jobs and are being paid less than men in the same jobs – which means we are undervaluing their work even as we depend on it more than ever before.”