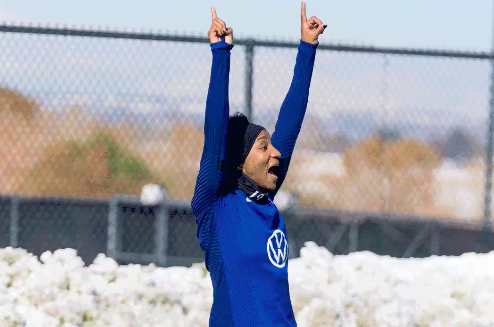 “We Will Not Stop Until We Have Gotten What We Rightfully Deserve”: USWNT’s Crystal Dunn On Equal Pay For Women

“We Will Not Stop Until We Have Gotten What We Rightfully Deserve”: US Women’s National Soccer Team’s Crystal Dunn Talks Equal Pay For Women

With all that’s happened in the sports world in 2020, chalk up the talk on gender pay gap in sports to one of the important conversations being had. In particular, the pay gap between men’s and women’s soccer.

According to ESPN, earlier this year, a judge ruled against the US Women’s National Team (USWNT) in favor of US soccer in an equal pay lawsuit.

“Frustrated by the ruling,” Julie Foudy, former US Women’s soccer midfielder with two gold medals and one silver medal per The Olympic Channel, said on ESPN in May. “But a part of me had been hopeful from the player side of me for months now that the players and US Soccer would come to the table, that they would settle. Because in the back of our minds, in the back of the players’ minds, they also knew going to trial could also be a dangerous path.”

Foudy said this was a lost opportunity and that the judge argued the women soccer players, over the last five years, made more money than the men in soccer, and that the pay structure for women was different from men.

“This isn’t over,” Foudy said.

Foudy said this is something they want to fix and wants it to be positive moving forward.

Most recently, USWNT defender Crystal Dunn was featured on the Burn It All Down podcast and talked about where this all stands. Dunn said it’s been quiet on updates regarding equal pay.

“I think more so quiet just because of what this year has been like, you know?,” Dunn said to Burn It All Down. “We’re not saying that the equal pay fight is not important, but we I think also are at a time when COVID is breaking out again and the racial injustices that have been happening has been huge in the forefront, and I feel like this was a time for us to kind of take a step back and just reflect, you know? Even though we are disappointed in the decision that was made we know that we are going to keep fighting and we know that this is not the end.”

Dunn said it’s been great for the national team to get back because it was challenging to get on the same page not seeing them, with only having ZOOM calls. But, she mentioned that as the world takes a turn “hopefully for the better” that “those conversations will be sparking up again.”

“How do we keep these conversations going? Because we will not stop until we have gotten what we rightfully deserve. Obviously being on the national team it’s been incredible because I do feel like we are pioneers, so for us these battles are hard to fight but we know that by doing that we are paving the way for those coming after us but also other national teams, you know? It’s been incredible to see that for us it’s like, yes we’re in our own fight, but it’s really not our own fight. It’s a fight for women everywhere to be recognized and paid what they are deserving of being paid. I’m seeing the effect all across the world and I think that’s what we are hopeful we can continue doing.”

USWNT defender Crystal Dunn, “Burn It All Down” podcast

ESPN’s Peter Keating went into detail in an analysis on “What equal pay in sports really means, as the fight goes on for U.S. women’s soccer“. Here’s an excerpt from what he said:

The American squad beat the Netherlands 2-0 in the final, capping a month of dominance in which Team USA outscored opponents 26-3. But by the time Megan Rapinoe, Alex Morgan and their mates were celebrating their triumph, the world knew they would earn just $4 million collectively, a fraction of what their male counterparts had taken home a year earlier. Indeed, the $30 million awarded to all of the athletes combined at the 2019 Women’s World Cup would not even equal the $38 million the French national team made after winning the 2018 men’s World Cup, where prize money totaled $400 million.

Peter Keating, ESPN: “Analysis: What equal pay in sports really means, as the fight goes on for U.S. women’s soccer“

ESPN also details the pay gaps and the USWNT lawsuit against US Soccer for further reference on this subject.

And Keating brought up an example in another sport. Basketball. Keating mentioned Lakers forward Anthony Davis was the first pick in the 2012 NBA Draft and made $27.1 million this season. And, according to ESPN, Nneka Ogwumike was the first pick in the 2012 WNBA Draft and made $115,000 last season, with both being six-time All-Stars in their respective leagues.

The Washington Post, in 2019, released a video wanting to see if the USWNT was, in fact, getting paid less. Within the video there was also an explanation of the gender pay gap and some perspective on this issue from a legal analyst:

“All of these things seem to be much better for men, but that isn’t necessarily the legal test,” Michael McCann, University of New Hampshire law professor and Sports Illustrated legal analyst told The Washington Post. “The legal test will be, do all of those things reflect gender discrimination and the argument will be that it’s not gender discrimination intentionally, that it turns out to be discrimination because of the marketplace. So, it’s a case that could cause US Soccer to have to raise some awkward arguments.”

Awkward arguments have ensued in 2020 but anything worthwhile, whatever side you fall on in an issue, requires having those hard, difficult conversations. Though it may be awkward, it’s important to make sure everyone is treated and paid fairly.