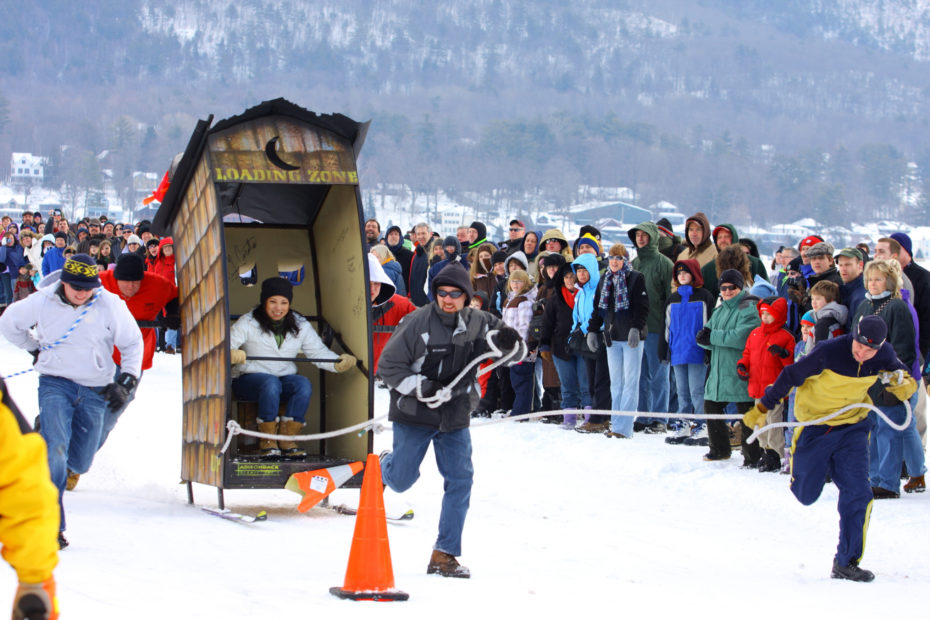 Bizarre, Fascinating, Weird Sports That Are Played Around The World

Have you ever made up a weird sport with your friends just to have some fun or found a way to make-do with what you have? For instance, you could use that paper from school to make a paper football, have your friend hold up his fingers in field-goal-form and flick the paper to see who can ‘kick’ the most field goals. Or, you can simply take some trash, crumple it up, and have creative dunk sessions or 3 point contests, slamming that paper or shooting a jump shot into the trash can.

Whatever is your fancy, there’s sport-upon-sport throughout the world that you may or may not know about. From outhouse racing to playing polo with Tuk Tuk’s, we’ve got you covered. They may sound different, they may sound interesting, they may sound bizarre, they may sound…fascinating. But to those who play it, it’s a way of life, a sport they love and dedicate their craft to, a sport they enjoy. So, out of respect to these athletes, this is a list to celebrate their sports as you sit back, relax, and enjoy this list of:

Bizarre, Fascinating, Weird Sports That Are Played Around The World

RELATED: Could Flag Football Be In The 2028 LA Olympics Games? One Report Suggests This As A Possibility

You heard that right. When I saw this, I had to do a double take. Outhouse. You mean…? Yes. That. And it involves racing, as well? What’s this all about? Just watch.

According to Smithsonian Magazine’s Jennifer Nalewicki, “(a)lthough similar races exist around the world, this one (‘the Outhouse Races in Anchorage, Alaska hosted by the University of Alaska Anchorage’s Architecture and Engineering Club‘) is considered the world’s largest and was started by the school as a fundraiser for Habitat for Humanity. (Each team pays $100 to compete.)…top competitors receive trophy-turned-toilet-paper holders…”

The thrill, the victory, the defeat, the toilet paper holder trophy!

You heard it right. Extreme ironing.

What happens for me on a natural, weekly-type basis, carrying my wife randomly throughout the day or giving her piggy-back rides while on a walk, is a sport?! Sign me up! We’d take the gold.

According to Rad Season, “An outlandish trust exercise for some or exciting honeymoon to others…The Wife Carrying Championship is considered one of the 7 most bizarre ‘feats of strength’ events in the world…the championship last year attracted 80 competitors that headed to the small town of Sonkajärvi, Finland armed with only a helmet and belt to help them cross the finish line…For this great feat of strength, the world champions win the equivalent of the wife’s weight in beer, a bag full of wife-carrying merchandise and an official logo statue.”

This is not a joke. This is an actual sport and true to its name, it’s exactly how it sounds. Two participants line up, play some chess, then box. It’s a cool sport if you literally think about it as the contestants have to use their thinking-caps and boxing hands to showcase their brains and brawn. A two-in-one-type-of-sport.

According to WIRED, “The rules in chess boxing are simple. There are 11 rounds and players alternate between boxing and chess. The boxing rounds last three minutes and the chess rounds last four. You win by knockout or checkmate. If neither of those is achieved, the boxer with the highest number of points wins.”

Here’s an example of what you may think as bizarre wherever you’re at in the world, around the world in multiple places, it’s so common and cool. What’s incredible about this sport is the amount of athleticism and, as you can see, almost acrobatic-type-skills and concentration you need when playing a sport with a ball of this size.

According to Tutorials Point, “Sepak Takraw is a foot volleyball game where players touch as well as handle the ball using only their feet, knee, chest and head. The rules and regulations of the game are very much similar to that of volleyball. A very popular game around Southeast Asia, the game is played using a rattan or synthetic ball. Since 1990, Sepak takraw is also included in Asian games.”

Ouch! Just reading the name of this sport hurts. Because I know (and maybe you do to) what it’s like to be hit in the shin. Whether that’s by playing some soccer (futbol) or accidentally hitting your shin against your table, it hurts! But, again, what you may think of as bizarre, it’s been an annual occurrence in England for a while.

According to Robert Dover‘s Cotswold Olimpick Games, shin kicking is “(o)ne of the sports which took place in 1612, and we’re still doing it to this day (although we’ve made it a bit safer since those days – Steel toe caps are banned, and we allow the use of straw to pad shins).”

We know hockey can be played on ice or on a field, but let’s take a deep dive and play some hockey…underwater? That is correct. This sport requires some underwater agility and stick skills.

According to Rules of Sport, “Underwater Hockey (sometimes called Octopus) was invented in the 1950s by the British Navy in order to keep their divers in shape and to improve their efficiency under water. It then became popularised in Australia before expanding across the world. The sport intertwines disciplines from both ice hockey and swimming in creating a competitive and fairly physical battle.”

Who cut the cheese. Better yet, who rolled the cheese? In this case, this has nothing to do with cheese. Just humans rolling down a huge hill to claim the prize. Actually, the cheese only comes in at the end, when winners can cut their own cheese as the prize they claim if they win it all.

According to So Glos, “Gloucestershire’s (England) Cooper’s Hill has played host to the traditional cheese rolling event since the 1800s, with thousands of spectators and daring competitors descending on Cooper’s Hill, determined to keep this world-famous tradition alive…The slope on Cooper’s Hill in Gloucester, the setting for the world-famous event, is in fact so steep that very few contestants manage to stay on their feet, instead tumbling head-over-heels down the hill in a desperate effort to catch the…prize – a weighty 8lb Double Gloucester.”

Last but certainly not least, is Tuk Tuk Polo.

Let’s break this sport down in three parts. First, if you don’t know what a Tuk Tuk ism according to A Tuk Tuk’s Agness, “The word tuk tuk is a term used for a type of three-wheeled motorized vehicle popular in Southeast Asia and some parts of Africa and South America.” Second, polo is, according to Brittanica’s Richard C. Latham a”game played on horseback between two teams of four players each who use mallets with long, flexible handles to drive a wooden ball down a grass field and between two goal posts. It is the oldest of equestrian sports. A game of Central Asian origin, polo was first played in Persia (Iran) at dates given from the 6th century BC to the 1st century AD.”

When you combine the two together? You get Tuk Tuk Polo. According to Top End Sports, “Tuk Tuk polo…was invented in Sri Lanka in 2016. The sport is a variation of polo, in which players are on vehicles called tuk tuk. The sport was developed as a replacement for another version of polo played on elephant backs which was discontinued in 2007 after one of the elephants went on a rampage.”

There you have it. Thanks to Sporting News’ compilation of ‘Top 10: Weirdest sports in the world’, Huff Post’s Kyli Singh‘s ’10 Weirdest Sports You’ve Probably Never Heard Of’, and Insider’s Kevin Baumer‘s compilation of ‘The 18 Strangest ‘Sports’ In The World’, which were good resources in researching types of interesting sports on this list.

So, grab your Tuk Tuk, your outhouse, your wife, and get in the game! What was your favorite on this list? Do you have any bizarre sports in your hometown? Let me know in the comments.