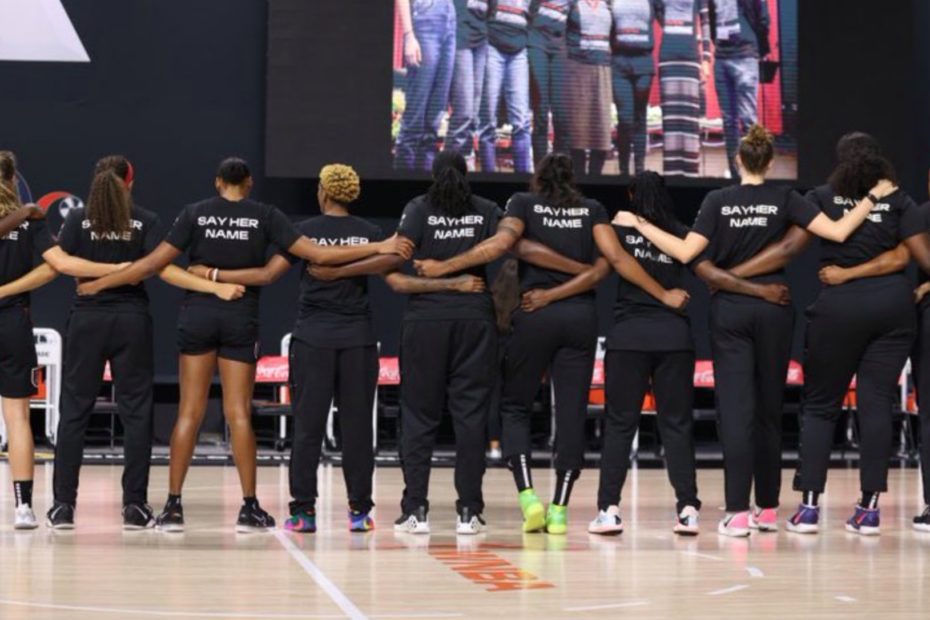 Report: Sale Of WNBA’s Atlanta Dream ‘Close To Being Finalized’

Report: Sale Of WNBA’s Atlanta Dream ‘Close To Being Finalized’

According to the AP, U.S. Senator Kelly Loeffler owns 49% of the Atlanta Dream.

That could soon change as multiple reports are saying the Dream is reportedly selling the WNBA team.

“As it relates to the Atlanta Dream, we understand a sale of the franchise is close to being finalized,” the WNBA said in a statement per the AP. “Once the sale negotiation is concluded, additional information will be provided.”

The AP’s Doug Feinberg reports that “there are five groups that have expressed interest in buying the Dream and that the team was ‘finalizing its decision'”.

Could LeBron James be a part of one of those groups?

According to that tweet on January 6, her very well could be.

“Think I’m gone put together an ownership group for the The Dream,” James tweeted. “Whose in? #BlackVotesMatter”

Maybe that ownership group is close to being together to buy this WNBA franchise.

But, according to the Sports Business Journal, Loeffler said she was not planning to sell and that “Loeffler and the team have been in conflict with one another following the former’s comments about (the) Black Lives Matter (political movement)”.

“The truth is, we need less—not more politics in sports. In a time when polarizing politics is as divisive as ever, sports has the power to be a unifying antidote,” said Loeffler in a letter she wrote to the WNBA Commissioner in July 2020 per Atlanta News Now (AJC).

Here is a part of the letter according to AJC:

“Players, coaches, and yes – team owners – share differing opinions on many issues. All of us have a constitutional right to hold and to express our views. But to subscribe to a particular political agenda undermines the potential of the sport and sends a message of exclusion. The truth is, we need less—not more politics in sports. In a time when polarizing politics is as divisive as ever, sports has the power to be a unifying antidote. And now more than ever, we should be united in our goal to remove politics from sports. The lives of each and every African American matter, and there’s no debating the fact that there is no place for racism in our country. However, I adamantly oppose the Black Lives Matter political movement, which has advocated for the defunding of police, called for the removal of Jesus from churches and the disruption of the nuclear family structure, harbored anti-Semitic views, and promoted violence and destruction across the country. I believe it is totally misaligned with the values and goals of the WNBA and the Atlanta Dream, where we support tolerance and inclusion. Amid the recent unrest in many American cities, this movement advocated the creation of lawless autonomous zones in places like Atlanta…”

As you read in part, Loeffler is against the “political movement” of Black Lives Matter but said “the lives of each and every African American matter, and there’s no debating the fact that there is no place for racism in our country”.

But the letter upset WNBA players, including players on the Dream’s team.

Biz Journals compiled this tweet, a statement from the team regarding their unity over the “Movement for Black Lives”.

“Black lives matter. We are the women of the Atlanta Dream. We are women who support a movement. We are strong and we are fearless. We offer a voice to the voiceless. Our team is united in the Movement for Black Lives. It is not extreme to demand change after centuries of inequality. This is not a political statement. This is a statement of humanity. Black lives matter. -The players of the Atlanta Dream”

According to Biz Journals: “Dream forward Elizabeth Williams told ESPN that the team has made a coordinated effort not to mention Loeffler in recent weeks and just focus on social justice by supporting the candidate who aligns best with their political views”.

“That’s kind of been the theme of this season,” said Williams per Biz Journals as Biz Journals notes she is also a member of the WNBA’s executive committee. “So we wanted to make sure we could still keep the focus on our social justice movement, and funny enough, Reverend Warnock is somebody who supports everything that we support and just happens to be running in that seat. So it just worked out really well.”

Senator Reverend Raphael Warnock was running against Loeffler in the important Georgia runoff election and Reverend Warnock ended up winning the seat.

“Congrats Senator-Elect Reverend Warnock!” Elizabeth Williams, Dream center/forward said in a Tweet. “I’m especially grateful for my fellow @TheWNBPA members on being strategic, fearless, and relentless. And to @staceyabrams, who turned a crushing gubernatorial defeat into sweet, sweet victory for an entire nation.”

According to the AP, “Players around the league have called for Loeffler to sell her 49% stake in the Dream after she wrote a letter to WNBA Commissioner Cathy Engelbert over the summer objecting to the league’s initiatives to advocate for racial justice and the Black Lives Matter movement”.

“The WNBA is based on the principle of equal and fair treatment of all people and we, along with the teams and players, will continue to use our platforms to vigorously advocate for social justice,” the WNBA said per AJC.

For some context on why people were upset about the BLM political movement, here is a NY Post report on what the site’s page previously stated: “We disrupt the Western-prescribed nuclear family structure requirement by supporting each other as extended families and ‘villages’ that collectively care for one another, especially our children, to the degree that mothers, parents, and children are comfortable”.

The NY Post reported that terminology regarding the nuclear family was removed which originally had people upset, including Marcellus Wiley.

Back to the Atlanta Dream’s part owner, according to WSB-TV 2 Atlanta, “Georgia Sen. Kelly Loeffler said she will be donating her final Senate paycheck before she leaves office to the Capitol Police Memorial Fund. The fund has been set up to honor Officers Brian Sicknick and Howard Liebengood, whose deaths are tied to the insurrection of the U.S. Capitol earlier this month.”

“Every Capitol Police Officer puts the safety and security of others before their own,” Loeffler said per WSB-TV. “Officer Sicknick and Officer Liebengood exemplified the selfless service that is the hallmark of the USCP. The tragic loss of these officers reminds all of us of the bravery of the law enforcement officers who protect our nation’s Capitol, my colleagues, congressional staff, visitors, the press corps and thousands of staff every day…I’m proud to donate my final Senate pay in honor of their lives and sacrifices. I thank the Capitol Police and all law enforcement officers for their dedicated service each and every day of the year.”

According to WSB-TV: “Loeffler’s office said she has donated her Senate salary to 40 different Georgia-based charitable organizations and nonprofits over the last year”.

According to ABC News, Loeffler, “who promised Trump in person at a rally…she would object to the certification, reversed course, saying she could not ‘in good conscience’ follow through on objecting to Biden’s presidency”. ABC News stated she was one of the GOP senators who “had promised to object to the certification of President-elect Joe Biden’s victory in the general election changed their mind” after the violent riot at the US Capitol.

“When I arrived in Washington this morning, I fully intended to object to the certification of the electoral votes,” Loeffler said per ABC News. “However, the events that have transpired today have forced me to reconsider and I cannot now, in good conscience, object.”

In the meantime, when it comes to the WNBA, the Dream have announced “free agency is underway“. No matter who will be in ownership, free agency goes on.

The Dream also have been remembering and honoring two sports heroes, including the beloved Hank Aaron. Aaron is in the Hall of Fame, was a MVP, a 25-time All-Star, three-time Gold Glove winner, two-time batting title champion, and World Series champion.