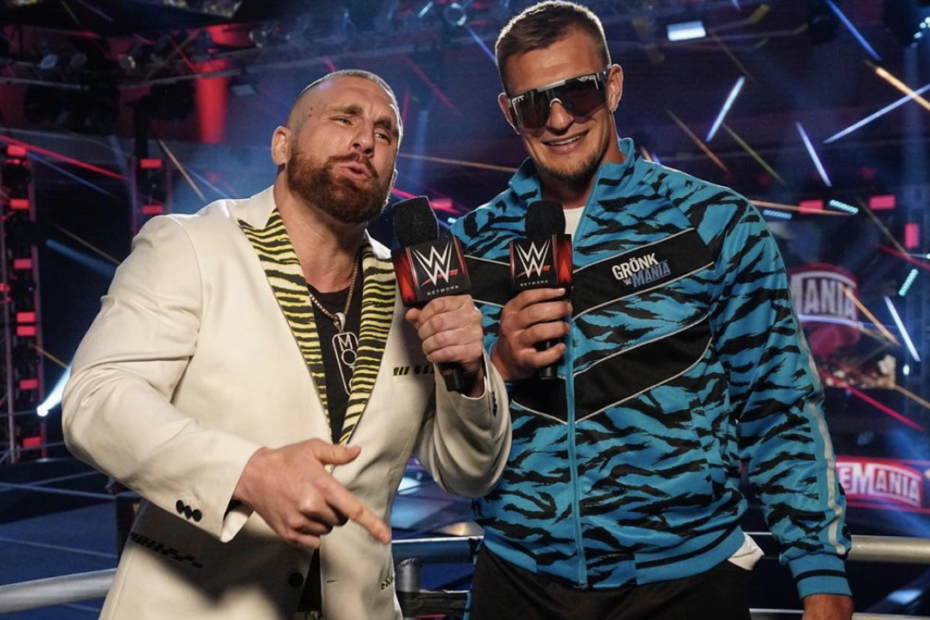 The Tampa Bay Buccaneers have been buzzing ever since trading for now unretired tight end, Rob Gronkowski. Gronkowski has been reunited with his quarterback Tom Brady, as the two will look to turn Tampa Bay into a playoff team. There’s just one problem: Gronkowski currently holds the WWE 24/7 Championship Belt.

Gronk has always loved watching professional wrestling and World Wrestling Entertainment in particular. It was announced on an episode of Friday Night Smackdown that Gronkowski would be hosting Wrestlemania 36.

The 2020 Showcase of the Immortals was one of the most unique Wrestlmanias of all time. The pay-per-view that was originally supposed to be held at the Raymond James Stadium in Tampa Bay in front of tens of thousands of screaming fans was instead held in front of no fans at the WWE Performance Center in Orlando, Florida. It would also be the first Wrestlemania held over two separate nights.

On the first night of Wrestlemania, Gronkowski was hosting alongside his good friend, Dean Muhtadi, also known by his ring name, Mojo Rawley, when then 24/7 Champion R-Truth stumbled into the pair.

The 24/7 Championship is one of the most peculiar titles in the WWE because of the way it is won and defended. On May 20, 2019, WWE Hall of Famer, Mick Foley, announced the newest WWE Championship Belt, the 24/7 title. Foley declared the title must be defended 24 hours a day, seven days a week, meaning so long as there is a referee present, anyone can pin the champion to the count of three to win the title.

After bumping into the 35-time 24/7 Champion, Gronkowski attempted to pin the champ before Rawley shoved him out of the way and won the title himself. Then on the second night of Wrestlemania, Gronkowski pinned Rawley to become the next 24/7 Champion.

Gronk currently has the second-longest 24/7 title reign at 28 or 29 days, only second to that of Riddick Moss who held the belt for 41 days early this year. Gronk’s nearly month-long title reign is quite remarkable considering the belt often changes hands more than once a week. In fact, on the July 22, 2019 Monday Night Raw, the Raw Reunion Show, the title changed hands 9 times.

Though he is now working in the NFL again, WWE said that Gronk still has to defend his title at any time and any place. Since the title has changed hands at a golf course, in Time’s Square, and 39,000 feet above the Red Sea, there’s is no telling when or where Gronkowski may lose his title.