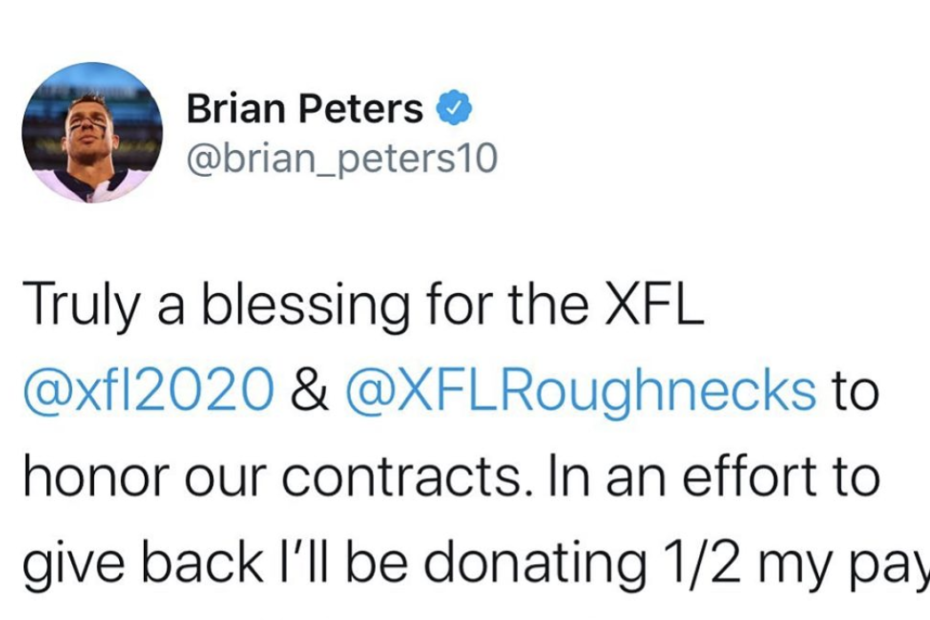 XFL Does the Right Thing and Honors Players Contracts, Despite Season Being Cut Short, Now One Player Is Donating Half of It

XFL Does the Right Thing and Honors Players ContractS, Despite Season Being Cut Short, Now One Player Is Donating Half of It

The XFL, along with every other professional sports league in the United States, came to a screeching halt, ending their inaugural 2020 season to reduce the spread of COVID-19.

The cancellation of their 2020 season was especially harsh for the new league with growing popularity. Though the season was only halfway over, the XFL decided to honor the players’ contracts and pay their players through the end of the 2020 season.

Unfortunate as the season’s end may be for players wanting to showcase their talents to NFL teams, some players like XFL MVP-to-be and former Houston Roughnecks quarterback, PJ Walker, who is now a Carolina Panther, have made their way from the XFL onto NFL squads.

One player who has decided to put his earnings to a good cause is a former undrafted linebacker and Houston Roughneck, Brian Peters. Peters announced this past Sunday, that he would donate half of the income from his five remaining paychecks to food banks as well as medical workers and other coronavirus-related causes.

He was then signed by the Texans later that month, and he would go on to be one of the team’s six captains as of 2018 for his outstanding play on special teams.

The day before Christmas in 2018, Brian Peters was placed on injured reserve. Finally, Peters signed with the Houston Roughnecks on March 9, 2020.

1 thought on “XFL Does the Right Thing and Honors Players Contracts, Despite Season Being Cut Short, Now One Player Is Donating Half of It”