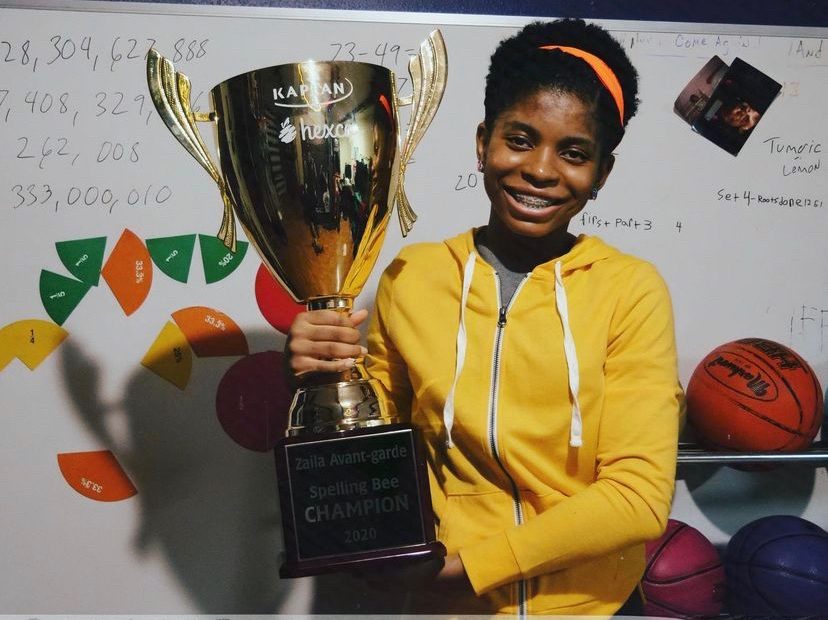 Zaila Avant-garde, 14, Is the First African American Winner of the National Spelling Bee

During ESPN’s live broadcast of the 2021 Scripps National Spelling Bee, Louisiana teen Zailia Avant-garde made spelling history. After spelling out the word ‘Murraya’ correctly, she earned the title of spelling champion and is officially the first Black child to do so nationally.

“I want to inspire everybody, especially African American girls,” said Avant-garde during her chat with People after the win.

In addition, she included her future plans. She said she would love to go to Harvard University “as a basketball player and a student” because it is “a good way to open doors to maybe being an NBA basketball coach.”

Not only is this teen talented in the field of spelling, but she is also a basketball prodigy. She holds three world records for her ability to dribble multiple basketballs at once. The young champion described spelling as a side-hobby, rather than a true passion.

According to ESPN, Avant-garde shared, “I kind of thought I would never be into spelling again, but I’m also happy that I’m going to make a clean break from it. I can go out, like my Guinness world records, just leave it right there and walk off.”

From spelling to dribbling, is there anything Zaila Avant-garde can’t do?

Apparently not. The Louisiana teen is very versatile and has many talents, which aren’t limited to the scientific field. She additionally told People, “I like working with NASA and doing gene editing. I have a lot of different things I’m interested in.”

While many bee competitors have been training as young as kindergarten, Zaila had only started a few years ago, making her win that much more impressive. She progressed very quickly and made it to the preliminary rounds in 2019 before being disqualified. Cole Schafer-Ray, 2015 Scripps runner-up and Yale student, quickly stepped in to coach the teen following her loss in 2019.

“Usually to be as good as Zaila, you have to be well-connected in the spelling community. You have to have been doing it for many years,” said Schafer-Ray. “It was like a mystery, like, ‘Is this person even real?'”

Zaila Avant-garde has a gift

Schafer-Ray went on to describe Zaila’s process as something he had never seen before. She was special and different from others. “She really just had a much different approach than any speller I’ve ever seen. She basically knew the definition of every word that we did, like pretty much verbatim,” said the Yale student. He added, “She knew, not just the word but the story behind the word, why every letter had to be that letter and couldn’t be anything else.”

This win has been a long time coming, as well. Considering the fact that the 2020 competition had to be postponed due to COVID-19 restrictions, it is a miracle that Zaila could secure her 2021 champion title in person.