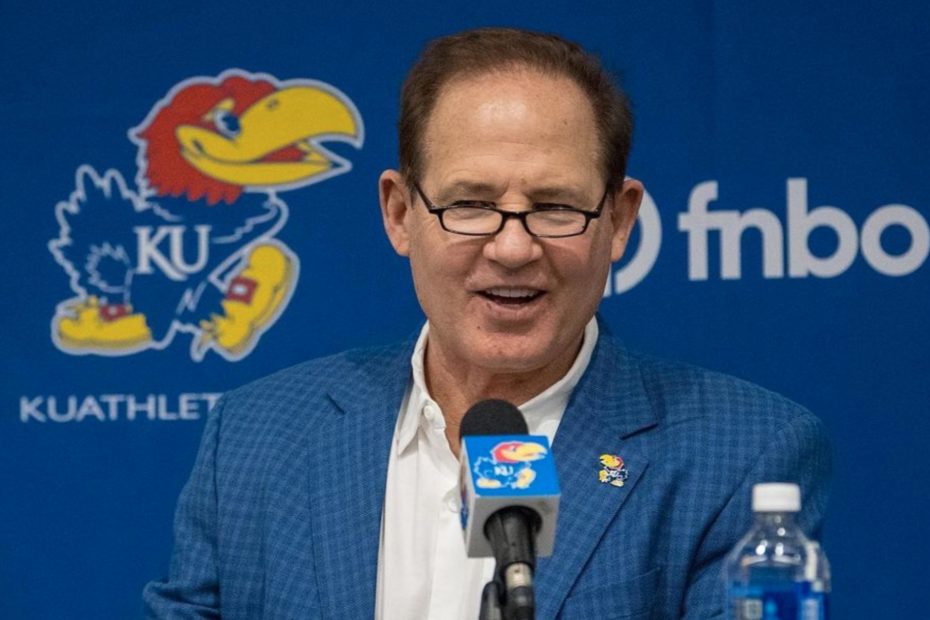 Les Miles is no longer the Kansas Jayhawks head football coach as the university and Miles have agreed to mutually part ways according to KU Athletics.

RELATED: Kansas Jayhawks Slip Out of the AP Top 25

Here’s some context as to how this all potentially came about over some recent events that have transpired over the last two weeks.

According to a USA Today investigative report on February 24 by Kenny Jacoby, Nancy Armour and Jessica Luther: “Three years before Louisiana State University fired him, head football coach Les Miles weathered an internal investigation into allegations he sexually harassed and made sexist comments about student workers”.

For more on the investigation, the full USA Today article is here.

On March 4, Jacoby, Armour and Luther report more of the allegations: “Les Miles was accused of texting female students, taking them to his condo alone, making them feel uncomfortable and, on at least one occasion, kissing a student and suggesting they go to a hotel after telling her he could help her career, according to an internal investigative report released by LSU…The investigation, done by law firm Taylor Porter on behalf of LSU in 2013, did not find that Miles had sexual relationships with any of the women. But it found his behavior inappropriate. Miles strongly denied kissing the girl, according to the report. He said that he did nothing wrong and was simply mentoring young women at the university”.

Kansas Athletics released a statement: “The University of Kansas and Les Miles have mutually agreed to part ways effective immediately. Terms of the agreement can be found here. While a national search for a new head coach begins immediately, Mike DeBord will continue to serve as the acting head coach until an interim head coach is determined”.

“I am extremely disappointed for our university, fans and everyone involved with our football program,” Long said. “There is a lot of young talent on this football team, and I have no doubt we will identify the right individual to lead this program. We will begin the search for a new head coach immediately with an outside firm to assist in this process. We need to win football games, and that is exactly what we’re going to do.”

“This is certainly a difficult day for me and for my family,” Miles said. “I love this university and the young men in our football program. I have truly enjoyed being the head coach at KU and know that it is in a better place now than when I arrived. To our student-athletes, I want you to remember that you came to play for KU and earn a degree here. So, I implore you to stay and build on what we started and do all of the things we talked about doing together. There is a bright future for all of you and for KU Football.”

According to KSNT’s Pete Francis, Long said “I also asked Coach Miles directly during the interview process whether there was anything in his past that could potentially embarrass the University or himself or our program and he said, no.”

In light of all the events that have transpired, even though it appears Kansas didn’t know of the previous allegations, more news surfaced on March 10 from Kansas’ Athletics Department.

On March 10, Kansas University chancellor Douglas A. Girod said per KU Athletics: “Director of Athletics Jeff Long announced he is stepping down from his position. Jeff and I spoke at length last night, and while I know he would have loved to stay here many more years, I respect his selfless decision to step down so that we can move Kansas Athletics in a different direction.”

“Dear Jayhawk Nation and Kansas Athletics: Last night, Chancellor Girod and I met and both agreed that it was in the best interest of our student-athletes and program for me to step down as of today. It is not easy, but I leave KU with a heavy heart and profound confidence that I have always acted in the best interests of Kansas Athletics. I have done everything in my control to move Kansas Athletics forward in a positive manner, that’s what makes this most difficult. When I first began my career in college athletics almost 40 years ago, I was driven by my desire to impact young lives through a common bond—athletics. That purpose is what has carried me each and every day—through the good times and the challenging ones—along my journey. As I noted yesterday in my press conference, the student-athletes have always been the priority and this decision today is based on that very premise. Values are not simply beliefs—they are defined by actions. It is clear that my continued service as the Director of Athletics would only serve as a distraction to the nearly 500 incredible young men and women in our athletics department, as well as to the outstanding coaches and staff who support them. Last night, I spoke with Chancellor Girod at length about my thought process, as well as with my wife, Fanny. Even though this is extremely difficult for me, this is what is best for KU, for me and for my family, and I am at peace with this decision.”