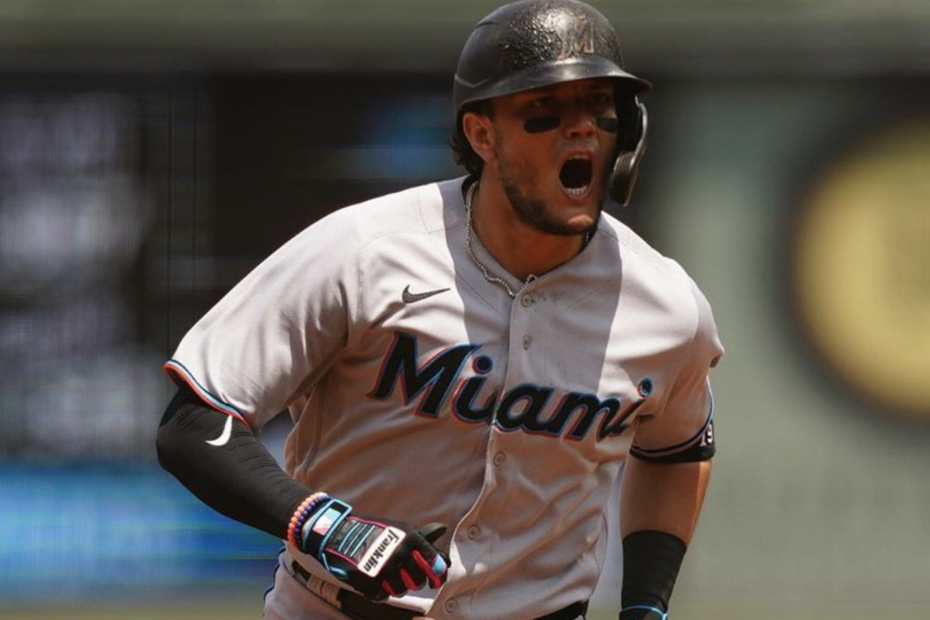 How the Miami Marlins Could Ruin the Entire 2020 MLB Season

How the Miami Marlins Could Ruin the Entire 2020 MLB Season

Just over a week ago, the MLB started up its 2020 season, which was around 4 months later than intended. The MLB tried to put in place regulations and precautions in order to keep players safe from COVID, and have been been working hard to keep players safe without having a bubble league.

For the first few days of the season, everything was going great, with no players testing positive for COVID, and lots of people watching the games on TV. However soon after its start, one player tested positive, which sent an entire team crashing down. Here is the timeline for the Miami Marlins COVID collapse:

The Miami Marlins played the Philadelphia Phillies in Philadelphia where they won 11-6. They were planning to fly home after the game in preparation for their home opener against the Baltimore Orioles, but they had to stay when four of their players tested positive for COVID. They planned to leave their infected teammates to quarantine in Philadelphia and to fly back home on Monday to play the Orioles.

Before flying home to Miami, the Marlins once again took COVID tests, and this time 11 players and 2 coaches tested positive. The Marlins immediately postponed their game that day with the Orioles, and the Phillies postponed their game with the Yankees, as they had just played the Marlins. Just as one player getting COVID could spread it to the whole team, one team postponing games can throw off every team’s schedules.

The Marlins remained in Philadelphia, as they were not safe to fly, and the Orioles flew to Miami but were met with no opponent. Commissioner Rob Manfred spoke out saying the situation was not one of “nightmare” caliber: “That’s why teams have replacement players.”

On Tuesday, 4 more Marlins players tested positive for COVID, bringing their number of infected up to 15 players (half of their roster), and 2 coaches. At this point, the MLB stepped in and paused their season, for a minimum of 1 week. In such a short season, 1 week without games will throw off the Marlins’ entire season, in addition to the seasons of their opponents. Once again, the Phillies vs. Yankees game was postponed. Dr. Anthony Fauci spoke out saying he thinks the outbreak could endanger the entire MLB season.

Wednesday was probably the most uneventful day for the Miami Marlins during this fiasco, with no new players testing positive. However, it was not completely uneventful. In accordance with the Marlins disaster of a week, Marlins Triple-A team owner, Lou Schwechheimer passed away due to complications from COVID. Lou had been working in the minor leagues for over 30 years. The Phillies game, this time against the Blue Jays, was once again postponed, but as a replacement, the Yankees and Orioles played each other.

On Thursday, the Miami Marlins had yet another player test positive for COVID. This brought the teams total to 19 cases (17 players). Once again, the Orioles played the Yankees. At this point, both the Phillies and Marlins have fallen far behind in their schedules.

After an 18th Marlins player tested positive for COVID, the Marlins finally began transporting their infected teammates back home to Miami. The Marlins have been stuck in Philadelphia this entire time. This means that without the infected players, the Marlins could start playing games again.

A preliminary schedule has the Marlins playing the Phillies again, then bussing to New York, and then to Buffalo (The Blue Jays play there because Canada does not want them) before returning to Miami in the middle of August. However, it is not even clear if the Marlins will have enough players to compete, that being if any team would want to face them.

While this seems like a complete disaster, which it is, it does not necessarily mean the end for baseball in 2020. Because of the MLB’s format this season, this whole disaster will only affect the Eastern divisions. The Western and Central divisions will not be at all affected as they have no overlapping games with the East.

Who knows what will happen next, and when or if the Marlins will play again. And this issue is not completely limited to the Marlins, recently, two Cardinals have tested positive for COVID, in what might be a very short-lived season.