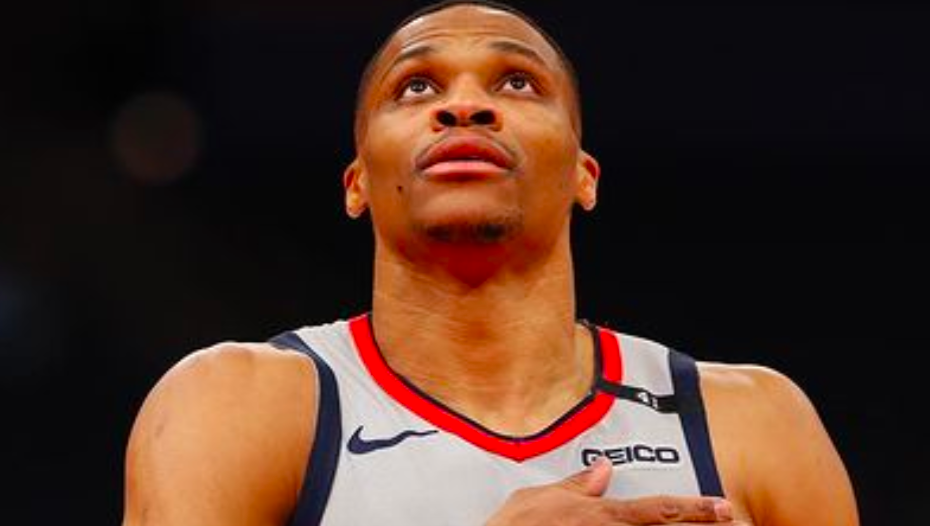 RELATED: Russell And Nina Westbrook Launch ‘Why Not? Academy’ Schools In LA Area

That’s correct and how Russell Westbrook is a part of history when it comes to the triple-double.

Russ and triple-doubles seem to just go hand-in-hand, no matter what team he’s playing on. This year, it’s with the Wizards.

If you don’t know, now you know that a triple-double in basketball is when you have double digits in three statistical categories. Most of the time it’s in points, rebounds, and assists in a game.

According to CBS Sports’ Sam Quinn, “Entering Monday, Westbrook had posted a triple-double in 14 of his past 17 games.

As Quinn added, Westbrook would go on to “continued his remarkable stretch of triple-doubles with 22 points, 14 assists, and 13 rebounds.” As a result of his incredible performances on the court, that gave Westbrook a grand total of 12 triple-doubles in the month of April, breaking a record previously held by Wilt Chamberlain, which was set in March of 1968.”

Westbrook not only broke Chamberlain’s record but he’s got another triple-double record to break shortly.

According to CBS Sports, the triple-double that broke Chamberlian’s record was Westbrook’s 30th of the season. However, it was also is 175th of his career. The current record for all-time triple-doubles in a single career is held by Oscar Robertson who has 181.

Meaning, Westbrook needs only six more triple-doubles by the end of the season to break that record.

Breaking Chamberlain’s triple-double record and then turning around to break Oscar Robertson’s record in NBA history?

Yet, for Russ, the triple double is just a part of his game. Here’s what he said about it all:

“I honestly believe there is no player like myself and if people want to take it for granted, sorry for them,” Westbrook said according to Yahoo! Sports “via NBC Sports”. “I’m pretty sure if everybody could do it, they would do it. I honestly make sure I impact the game in many ways every night; defending, rebounding, passing, assisting, whatever it is my team needs from me to be able to win. That’s what I do. I really don’t, honestly, I don’t care what people think about it.”

“I don’t care what anybody thinks of this whatever they want to call it ‘stat-padding’ or ‘not useful’,” Westbrook said as transcribed via Yahoo! Sports. “I think it’s very interesting that it’s not useful when I’m doing it. It wasn’t useful when Magic [Johnson] and Oscar [Robertson] and those guys were doing it. Now that I do it and it looks easy, this (crap) ain’t easy, though. I’ll tell you that. It ain’t easy.”

Keep going he is, indeed.

Right now, the Wizards are just three games back of the eighth spot in the East. But, with the play-in tournament this year, teams seventh through tenth will make it. Where Washington sits right now, if that’d start today, they’d just get in because they’re in tenth place.

Oh, and in case you forgot, Russell is also clutch in games, but how could you forget that?